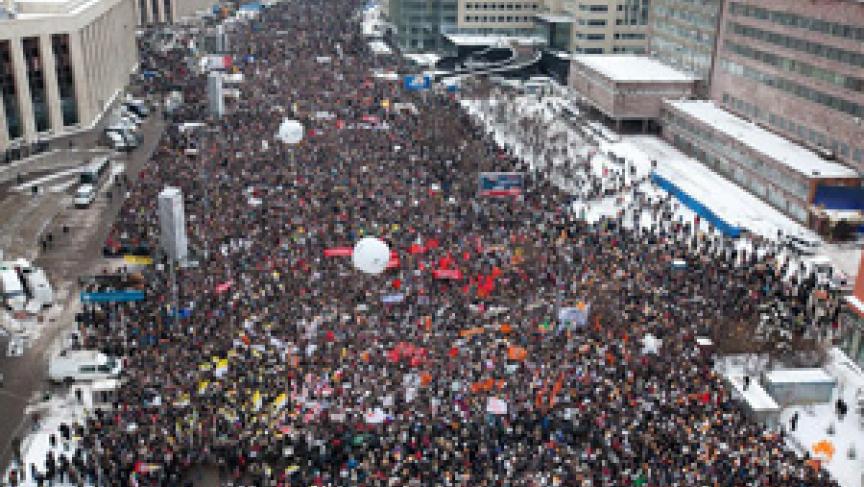 Muscovites protest in December. Their displeasure with Vladimir Putin's re-election campaign and political corruption has sent thousands into the streets. (Photo by Flickr user mpeake, cc-by-sa.)

In just a few days, Russians go to the polls to elect a new President.

All indications are they will choose a familiar face. Vladimir Putin seems set to become president despite a surge in protests against his leadership.

Those protests have been largely confined to cities, especially Moscow. Unlike the Arab Spring, though, these people are not facing a future blighted by poverty and unemployment.

Instead, they are among Russia’s more prosperous middle class.

The low unemployment rate is the first key to understanding the motivations of the people who are protesting on Moscow’s streets and one person who understands that perhaps as well as anyone is Yuri Virovets, the president of the online recruiting company Headhunter.

It is not easy to keep up with Virovets as he charges around the headquarters of the company he founded nearly a dozen years ago. Through the security doors and down the stairs, he races past an office that would look right at home in Silicon Valley.

Young men parked in front of huge computer screens sit near a room full of beanbag chairs where the employees are encouraged to relax.

Given the boom times in Moscow, Virovets says his company is very busy.

In fact, Moscow is experiencing a nearly zero percent unemployment rate, meaning just about anyone who can read and write can get a job and get it fast.

“Companies and corporations are requiring qualified workers, qualified employees not only of the top level for top professionals, but also the plumbers, the construction workers — any blue collar jobs, a lot of opportunities to find the job in half an hour if you want to,” says Virovets.

So Muscovites are working and a good number of them are making a very nice living. But on weekends, with increasing frequency in the past few months, tens of thousands of them have marched on to Moscow’s streets in protest against Putin.

This past weekend was the fourth of a series of large protests, unprecedented in the Putin era.

Masha Lipman, a political analyst with the Carnegie Moscow Center, said those at the heart of this protest movement may be relative prosperous. But Lipman said it is not about money.

Instead, she said it's rooted in a growing disillusionment with government corruption and abuse of authority, capped by what they see as Putin’s trick to trade places with Dmitry Medvedev in order to become president again.

An angry mood, she said, became a movement, when parliamentary elections this fall were widely criticized as rigged. And it has nothing to do with the Arab Spring.

“It’s born here, it’s a new generation of Russians, they do not look to the west for inspiration, let alone money. They are critically minded, broadly minded Russians. They do not share the mentality of dependence that more conservative minded Russians do. They do not have the Soviet legacy of 'We should rely on the government or else,' ” Lipman said.

Their relative affluence, Lipman said, also explains why the protesters are calling for change, but not for an overthrow. To them, she said, this is an evolution of democracy in Russia, not a revolution.

“This is not Tahrir Square. People have not shown any desire to come and stay until the leader resigns. This is a totally different environment. People come for a few hours of a sanctioned authorized rally and then happily after an event that’s hip and cool and fun they go back home," Lipman said. They go back home, they go back to their normal lives.”

That description seems to fit Virovets. He may be wealthy, but he too has been out on the streets. And he is happy to admit he even borrowed a line from American rebel history when he created his protest sign.

“Me and my wife we made this slogan: 'No taxation without representation,' which is the slogan of the Boston Tea Party,” Virovets said with a chuckle.

Virovets believes something fundamental has changed in the last few months among people like him.

“They crossed this mental threshold and they understand that you can change something if you want to and there are a lot of people who are thinking like you. People get the knowledge they are not alone,” he said.

He has bet a friend an expensive bottle of whiskey that Putin won’t last the full six year term of his presidency. Masha Lipman isn’t so sure, but she does think Russia’s strongman is now vulnerable.

“Putin is weakened by these protests even if he has for the time being, he’s got all his elites showing loyalty. He’s got all his huge propaganda machine working for him, still he is undoubtedly weakened,” Lipman said.

Weakened, but far from defeated.

Most public opinion polls are predicting a strong victory for Putin, indicating he still has solid support outside the cities.