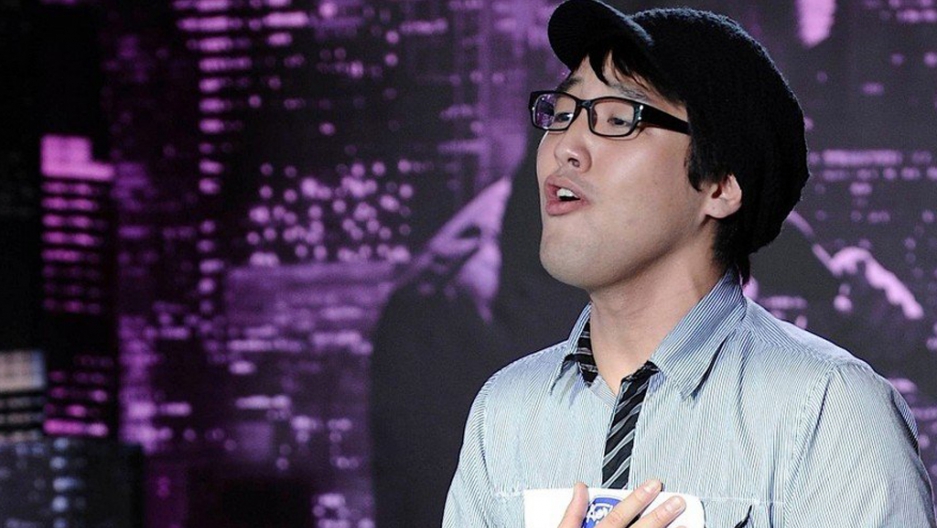 Queens native Heejun Han sings "How Am I Supposed to Live Without You" by Michael Bolton at the Pittsburgh Auditions of American Idol Season 11. He is one of the top 24 finalists.
Credit: Michael Becker / FOX
Share

BOSTON — Perhaps you've heard of Heejun Han, the 22-year-old Korean American from Flushing, Queens, who also happens to be a semi-finalist on American Idol Season 11.

To many, he may seem an unlikely star. He's known for his likable personality, but also for shaking his arms before each performance to get the nerves out. Idol judge and Aerosmith leading man Steven Tyler said Han's song selection on Tuesday night — Robbie Williams' "Angel" — was a miss.

But when he opens his mouth to sing — that’s when US pop star Jennifer Lopez gets a little teary. His voice on Tuesday was "smooth as silk," J Lo said. His initial performance “really impressed and shocked” another judge, music producer Randy Jackson. Even Tyler said previously he thought Han “could be the next American Idol.”

Han isn’t the first Asian American to be on American Idol, but the overwhelming love and attention he’s getting on camera and off makes it seem that way.

Most talented Asian-American singers have struggled to break into the US music scene. But even as Asian Americans have trouble getting the attention of US music producers — a problem many artists blame on racial barriers — imported K-pop, or Korean pop music, is growing in popularity in the US.

K-pop groups have landed on stages like Madison Square Garden and the Letterman show, while most Asian-American artists are self-supported, reaching their audience primarily through YouTube.

And many more Asian Americans are making the reverse journey to Asia in search of opportunities to perform.

Consider Korea's infatuation with singer Ailee and the more veteran Jay Park, who rank No. 7 and No. 9, respectively, on the “K-pop Hot 100” Billboard music chart. What do these two singers have in common? Both are from the US; Ailee is a New Jersey native, and Jay Park is from Seattle.

The trend is nothing new, according to Oliver Wang, a music journalist and assistant professor, who teaches pop culture at California State University Long Beach.

“When I was in college in the early ‘90s, people would talk about the LA Boyz who found far greater fame and success in Taiwan than they did here,” Wang, 39, said.

LA Boyz, a Taiwanese-American boy band formed in 1992, brought American hip-hop from Los Angeles to Taiwan. Solid, a Korean-American trio, did the same but with R&B in Korea, becoming the country’s first R&B group.

“I do think that for many Asian Americans, frustrated by the lack of opportunities locally, they see Asia as a potential avenue where racial differences won't matter as much. It's certainly no guarantee — Asian countries generate so much local talent it's not like they need our ex-pats to go over there — but it's been a 20-year trend thus far,” Wang said.

Indeed, Asian countries welcome artists with Asian roots and American culture; they are seen as an alluring blend.

“Asian-American artists are both American and Asian so it’s strange and exotic [to them],” said Tatsu Aoki, Japanese American founder of the Chicago Asian American Jazz Festival.

Entertainment companies in Asia, especially Korea, frequently hold worldwide auditions in search for the next K-pop star. Often the top contestants include Asian Americans who may or may not speak fluent Korean.

“There’s like 10 of them [audition shows] in Korea,” Heejun Han said. “When I see those shows with people who sing so well and have perfect English, I’m curious why they don’t try in the US.”

But where are they now?

Asian-American artists flounder in US

Park’s American Idol fame propelled him overseas. A native of Northbrook, Ill., Park was cast in a Korean cable show SuperStar K. He flew to Korea for the show, improved his Korean performing K-ballads and nailed his version of “Man in the Mirror” to score the runner-up position in the whole competition.

Kim, a California native, also released his debut Korean single earlier this month. But in the US, the response was much cooler.

“Before and after being on the show [American Idol], I had meetings with major labels, and people loved my music. But it was too big of a risk for them to invest that much money in an Asian,” Kim, 30, said in a recent telephone interview. “They told me to keep in touch but they’d have to wait and see how Asians do in the market.”

More from GlobalPost: K-pop born in Korea, headed for the USA

“America still welcomes foreign good[s]. K-pop is a foreign good. America mainstream music is not interested in Asian Americans but Asia," Aoki said. "We need more producers who are willing to work with, to produce Asian-American singers in America."

“I struggled for years… I spent so much time chasing a record deal,” Kim said.

Although he’s been hurt by a US recording industry hesitant to sign Asian-American talent, Kim says he's optimistic the climate for Asian-American artists in the US will change.

And there have been some encouraging signs.

Could self-producing be the answer?

Asian-American singer-songwriters Clara Chung and David Choi have been gaining a presence on YouTube.

“If I didn’t have YouTube, I wouldn’t be here. I would still be doing music but no support, no tour, nothing I’m doing now,” said Choi, who ended his Southeast Asia and Australia tour in July and performed in both Korea and Japan in December.

Chung and Choi aren’t mainstream artists, but they have succeeded in creating their own brand without a major label or budget, and big companies are starting to take note.

Last January 2011 TC Helicon of TC Group Americas, a company that makes vocal harmony processing products, sponsored Far East Movement, the first Asian-American group to land No. 1 on the Billboard Top 100 chart and iTunes with their hit single “Like a G6.”

Chung’s upcoming April tour will be fully funded by TC Helicon and Guitar Center, making every show free for her fans.

A singer-songwriter herself, Davidson said she’s picky when it comes to which artists she likes, but “it was a no brainer to work with her.”

“When I see a black artist or white or Asian I just see if they’re good. I’m not color blind, but I never think, ‘My, we’re lacking Asian-American artists in this industry!’ But are they good. Are they making good music?” she said.

Aziatix agrees that only the music matters.

“I wish they had a label for 'Good Music' and hopefully we would be in that category,” said Nicky Lee, vocalist of Aziatix, which launched its 2012 US Tour on Feb. 24 and will perform in Boston on Feb. 29.

David Choi is also preparing for the second half of his US tour. He said it's harder to make it in the US than Asia.

“In Korea it’s possible to become an overnight celebrity," he said. "Here [in the US], it can happen but it’s a lot harder.”

One YouTube user, pisthobranch, commented on a video of American Idol hopeful Heejun Han: “Heejun should move to Korea and become a mega world pop star!”

Another user, chonmaya1, said: “If Heejun doesn’t make it on American Idol SM Entertainment or JYP are most likely to make him a K-pop star.”

But even if he is eliminated on Thursday, Han says he has no plans to pursue music in Korea. He wants to stay and try his luck in the US.

“I don’t know how far I’m going to go [on the show] but I want to pursue singing here. There has been no Asian-American singer really out there in America. I don’t want to be a lawyer or a doctor. I want to break those stereotypes,” Han said.

“I just want to be an ordinary nerdy Asian guy that pursues his dream in the US,” he said.