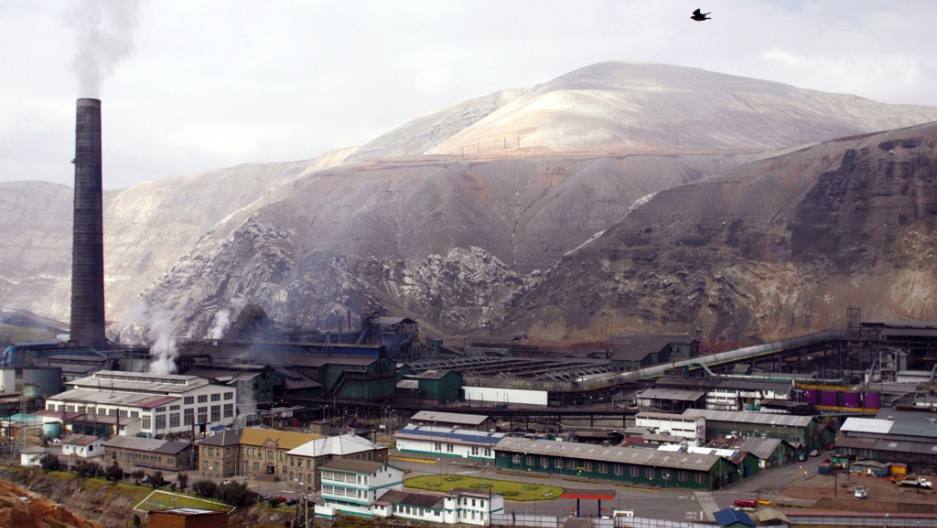 The Doe Run Mining complex, in the Peruvian mountain town of La Oroya, could soon resume operations after it was shuttered in 2009 after having turned La Oroya into one of the world's most polluted towns.
Credit: EITAN ABRAMOVICH
Share

LIMA, Peru — For almost 90 years, the smelter at La Oroya, high in the Peruvian Andes, spewed out a toxic cocktail of heavy metals that slowly poisoned the town’s people.

The contamination became so bad that La Oroya has been compared to Chernobyl and ranked among the world’s 10 most polluted places.

The plant has been offline for over two years due to financial troubles, the owners have said.

Now — despite concerns that Renco Group, the US company that runs the plant, has largely failed to install the new technology needed to prevent it from again emitting clouds of deadly smoke — the smelter may be set to reopen.

“We are totally exposed, especially the poorest, the children and the elderly,” said retired local teacher Rosa Amaro, who heads the Movement for the Health of La Oroya, or MOSAO, a local activist group.

The smelter is one of just a handful in the world that can process multiple metals, including copper and lead, as well as refine zinc. But its antiquated technology emits contaminants such as arsenic, cadmium, lead and sulfur dioxide, which cause serious health problems.

In one study, by St. Louis University in 2005, more than 90 percent of children from La Oroya had excessive levels of lead in their bodies. And ambient levels of sulfur dioxide, which causes acid rain, have been recorded at a mind-boggling 27,000 parts per cubic meter — almost 100 times the limit established by Peruvian law.

The smelter stopped production after banks cut off credit to Doe Run Peru, Renco's local subsidiary, in 2009. The firm pleaded financial hardship and failed to implement the environmental management plan that was a condition of its purchase of the smelter from state ownership in 1997.

Asked about allegations that Doe Run had misled Peruvian authorities during the purchase of the smelter, Luis Hernandez, spokesman for the company, insisted: “The company has complied with all relevant laws.”

Now, three years later, local congressman Casio Huaire is attempting to get the Peruvian Congress to pass a new law giving Doe Run Peru two more years to complete the environmental clean up — and allow the smelter to operate in the meantime.

If passed, the law would mark the third time the company has been allowed to delay completion of the environmental management plan.

Despite the contamination, many locals actually back Doe Run, which has kept 4,000 La Oroya employees on full pay since the plant closed down, a powerful incentive in an impoverished region some 12,000-feet high in the Andes.

Jose de Echave, a former deputy minister for the environment who now heads the nonprofit CooperAccion, said Peru should be more careful about how it allows foreign companies to operate here.

“It would send a terrible message about the kinds of investments that Peru as a country is looking for,” he told GlobalPost. “The renewed emissions would have an immediate negative effect on the population of La Oroya.”

Behind Doe Run Peru’s failure to modernize the smelter and stop the pollution lies a complicated and controversial tale of financial woes.

Privately-owned by New York-born tycoon Ira Rennert and his family, Renco’s global sales in 2011 were an estimated $7.75 billion, according to Forbes.

But that has not stopped Doe Run Peru from pleading poverty and failing to pay a series of multi-million dollar debts, including to the Peruvian taxman. Recently, the company even asked the Peruvian government to subsidize the costs of its clean-up.

Under the terms of Renco’s purchase of the smelter, it agreed to set aside more than $100 million for the environmental management plan. But, according to local reports, that plan never materialized.

Doe Run insists it has gone to great lengths to upgrade the smelter and help local people. But few in Peru believe the company, which because it is privately-held only releases limited financial information.

“The problem is the company is not transparent,” Echave said.

Hugo Villa, a doctor who worked at a public clinic in La Oroya for three decades, is unconvinced that the company has complied with the Peruvian law.

“There is a silent epidemic here,” he said. “The effects on the children are not easily visible, but they have all kinds of serious health problems, and those will only get worse if the smelter reopens.”

One person who is already suffering is Moises, the 18-year-old son of Amaro, the local campaigner. Moises has a series of ailments such as fatigue, aches, mood swings and respiratory problems.

When he was 5-years old, Amaro said lead levels in her son's blood were measured at 58.3 micrograms per deciliter, almost six times the safe limit established by the US Center for Disease Control.

“Jobs are important,” Amaro said. “But they should not come at the cost of our health. What kind of development is that?”