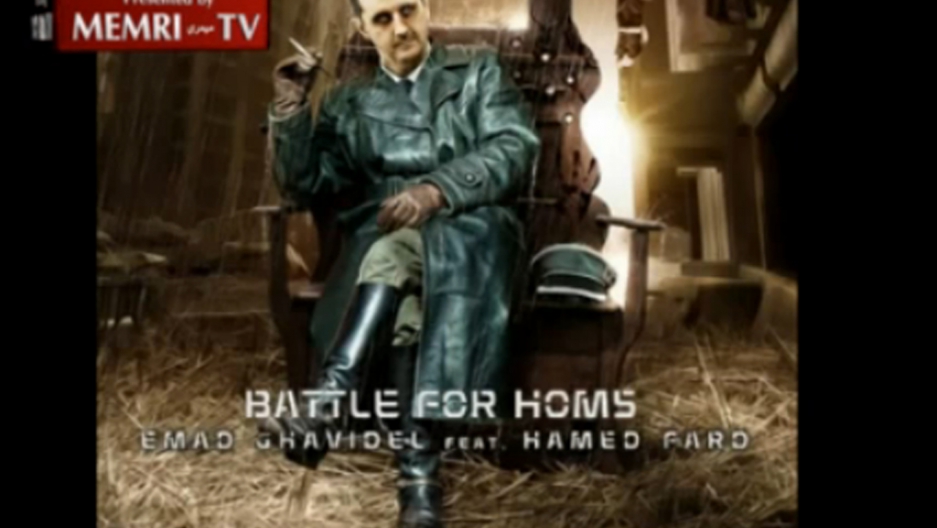 A still image taken from the video "Battle for Homs," as published by MEMRI, shows Syrian President Bashar al-Assad coolly smoking a cigarette in a leather-gloved hand.
Share

Iran celebrated yesterday after a Persian-language film won an Oscar, but would they be so happy to see a Grammy awarded to these guys?

Braving what must be the risk of terrible government sanctions, Iranian rappers have produced a video denouncing the government of Bashar al-Assad for killing Syrian civilians and also taking aim at Russia and China for supporting this at the United Nations.

Over graphic images of civilian casualties in Syria, lyricists going by the names of Emad Ghavidel and Hamed Fard rap about the murder of Syrian children and their hatred of al-Assad in a piece titled “Battle for Homs."

“You will pay for it, Bashar Al-Assad./Even if I am drowned in my own blood, I would not shut up,” they say, according to a translated transcript published by the Middle East Media Research Institute, a pro-Israeli research center in Washington. “Hey, Medvedev, I do not know what you are planning to do./But the truth is that you have become a bad name in history!"

The video, originally posted to the Internet on Feb 19, contains some graphic imagery:

Russia and China on Feb 4 vetoed a UN Security Council resolution which would have called for an end to the violence in Syria, which has killed thousands in a year-long uprising against the Alawite regime.

Iran, a Shiite government, is a long-time backer of the Shiite-minority dominated government in Damascus. But Emad Ghavidel and Hamed Fard say in “Battle for Homs” – “I cannot eat anymore, I cannot swallow food. They have destroyed my religion. “

The Iranian Students News Agency reported today that Iran had congratulated the Syrian government for a supposedly successful Constitutional referendum on Sunday. Western leaders and dissidents dismissed it as a farce, according to Reuters.