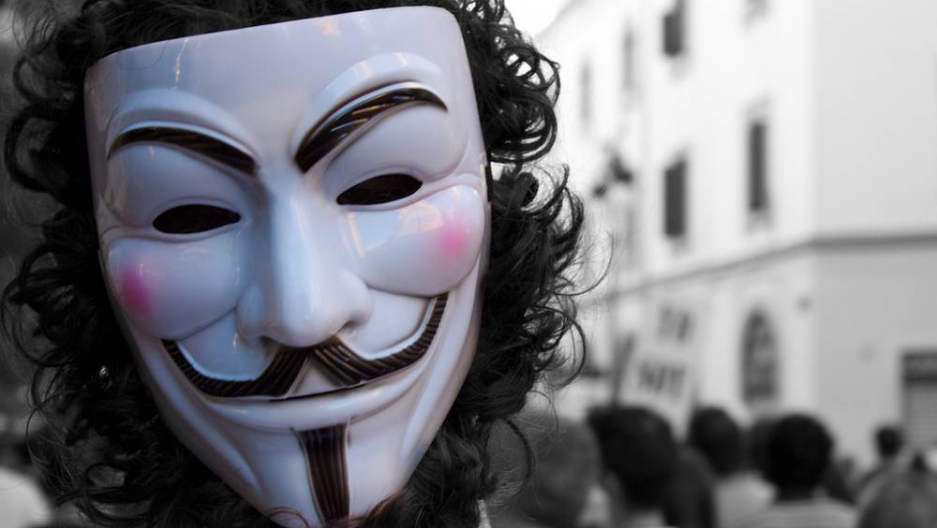 The hacker group Anonymous uses the Guy Fawkes mask as their logo.The NSA has warned that the hacker roup Anonymous may pose a threat to national security. (From Anroir on Flickr/flickr)

The hacktivist group Anonymous has become a powerful force in the past few years.

The loosely affiliated group of computer programmers has launched several high-profile cyber assaults against US government and corporate sites.  It stood behind Wikileaks leader Julian Assange, behind the Occupy Wall Street movement, and has targeted sites run by Visa, Mastercard and Paypal, as well as the public sites of the CIA and Federal Trade Commission.

Now, according to a The Wall Street Journal report, the National Security Agency has warned that Anonymous could pose a threat to national security.

Siobhan Gorman, an intelligence correspondent for The Wall Street Journal, said the NSA believes the group could have the ability within the next year or two to cause a limited power outage through a cyberattack.

According to Gorman, a growing concern between senior level officials in the White House is the direction of Anonymous's capabilities and how to deter them. Though Anonymous is more known for its "hactivist" stunts, Gorman said that they appear to be headed in a more destructive direction. The Journal claims that Anonymous has a campaign to shut down the Internet at the end of March, which it calls "Operation Global Blackout." Internet users operating under the banner of Anonymous deny these claims.

Unidentified sources told the Journal that in private meetings at the White House, NSA Director Gen. Keith Alexander warned that in a year or two the group could attack the energy grid and shut off power for millions. The Journal reported that though Alexander hasn't publicly voiced any concerns, he has warned publicly about an emerging ability by cyberattackers to disable or even damage computer networks.

"A group like Anonymous is very difficult to deter from this type of behavior, because they are basically seeking attention. The thinking was that they could take out some portion of power temporarily. To the average person, it might not look like more than what would be hit in a powerstorm. The issue is that Anonymous makes these things public," Gorman said.

By demonstrating such capability, she added, Anonymous gains a little bit more leverage.

The International Business Times reports that several Twitter accounts associated with Anonymous have tweeted messages accusing the NSA of fear mongering. One such tweet from YourAnonNews, reads: "Why would Anons shut off a power grid? There are ppl on life support / other vital services that rely on it. Try again NSA. #FearMongering." YourAnonNews announced the temporary takedown of the CIA website on Feb 10. In another tweet from YourAnonNews, the group called the NSA's claims "transparent and baseless."

The Washington Post reported that Anonymous attacked a number of Wall Street Journal Facebook pages with "a comment flashmob" Tuesday, just hours after the Journal published their report.

Although the NSA and the FBI have been investigating Anonymous for more than a year, the identities of its members are largely unknown. The difficulty lies in evaluating the group's capabilities since its members are literally anonymous.

"I can't imagine that anybody, even the members of Anonymous know who everyone is in the group," Gorman said. "Members could come in who have higher level capability, especially if there's cross-pollinization with organized crime groups. Those types of groups tend to have higher attack capabilities than just your average teenage hacker."

So far, Anonymous attacks have focused on embarrassing companies and organizations.  Group members view Anonymous as a sort of vigilante group with an anti-establishment message. They have concentrated on exposing data or taking sites offline, usually for a cause. However, in Gorman's opinion, they are often seeking attention.

"They tend to do these things as retribution for some sort of injustice that they see, and the concern is that the utilities are seen as maybe the most basic resemblance of power," she said.

Cyber security experts are concerned that they may not have the capability to fend off an attack, Gorman said, because the power grid was not built with cyber security in mind. Intelligence officials describe the grid as "security through obscurity", meaning that the tangled nature of the grid makes it difficult to take out large quantities of the power grid at the same time. However, it is much easier to take down smaller portions of the grid.

"The potential for vulnerabilities or attacks on any single element is pretty high just because it's a very difficult thing to defend. It's something that the power companies have been working on, but most cyber security experts say that if Anonymous sets its sights on something, the power grid is probably not as hard a target," Gorman said.

Gorman said it's not likely Anonymous will be formally labeled a terrorist organization.

"My guess is that we're a ways away from that. But it is definitely a growing concern in the U.S. government," she said. "The government has been working on strengthening cyber defenses, but the problem is that defending the entire U.S. Internet is just a really, really big job."