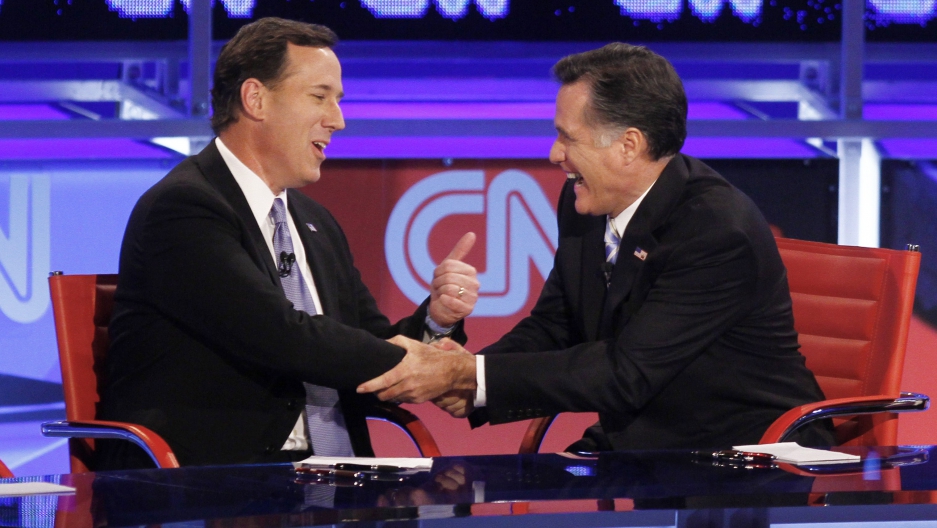 Voters head to the polls on Tuesday in Michigan. Rick Santorum, left, Mitt Romney are in a dead heat, with (not pictured) Newt Gingrich and Ron Paul Trailing. (Photo by Reuters.)

It was a tough weekend for the Mitt Romney who hopes to present himself as not too different from Joe Voter in Michigan.

In two separate incidents, Romney boasted of the "couple of Cadillacs" he owns at two separate houses, as well as the close friends he has who are NASCAR team owners. Not exactly relatable to the average, middle class American.

But on the polling front, most of the polls have Romney with a slim lead over challenger Rick Santorum. According to the latest polling average from RealClearPolitics.com, Romney has a 1.5 point lead of Santorum — with voters heading to the polls on Tuesday.

Bill Ballenger, editor of the newsletter Inside Michigan Politics, said it's an interesting strategy because they're talking issues that likely won't make a huge difference to voters in the GOP primary and might hurt them, down the road, in a general election.

"How big an issue is the auto-bailout really going to be with Republican voters tomorrow in Michigan," Ballenger said. "I don't think it's going to be that big an issue because all four Republicans who are still running on the ballot in Michigan take pretty much the same position; that is that there shouldn't have been a federal bailout of the auto industry."

But after the primary, for example, there's evidence that will resonate with Democrats and Independents in November.

Going into Tuesday, Ballenger said, it's too close to call on who will win Michigan.

"Mitt Romney seemed to have the momentum by the end of last week. He was ahead in a couple of polls by six and eight points, seemed poised to keep going," Ballenger said. "Now, all of the sudden, his momentum has been arrested."