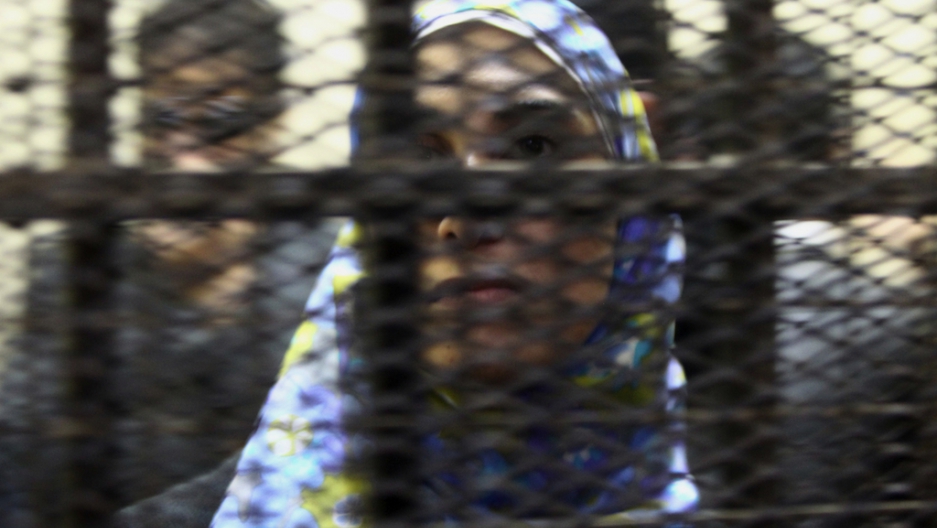 One of fourteen Egyptian activists who worked in Egypt with civil society groups stands inside a cage during their trial in Cairo Sunday.
Credit: KHALED DESOUKI
Share

It's been a year since Egypt's authoritarian president, Hosni Mubarak, stepped down. But now it is the democracy activists - employees of foreign-funded NGOs - who are on trial for political meddling.

In a case that is straining Egypt's ties with the US, 43 employees of organizations like the International Republican Institute (IRI), National Democratic Institute (NDI) and Freedom House, are now standing trial for receiving illegal foreign funds to carry out political activities in the post-revolt period.

After the military seized power as guardians of the people during the popular uprising, the language of the revolution has been turned against the revolutionaries.

It's fairly appropriate, then, that one of the defendants, Freedom House Egypt director, Nancy Okail, was captured by the European Pressphoto Agency reading George Orwell through the black bars of the cage where the accused stand during trial.

Orwell is famous for his anti-authoritarian works, Animal Farm and 1984, as commentaries on thought control and government surveillance and propaganda.

Later on Twitter (the defendants were released without bail until the next hearing), Okail said she had been reading Orwell's Homage to Catalonia, where he writes about his experiences fighting for socialism in the Spanish Civil War.

In the book, Orwell is forced to flee Spain when his pro-Stalin Communist allies begin attacking the socialist for failing to toe the line.

Opposed to the centralized machinations of the Stalinist revolutionary model, Orwell was labeled a pro-regime fascist.