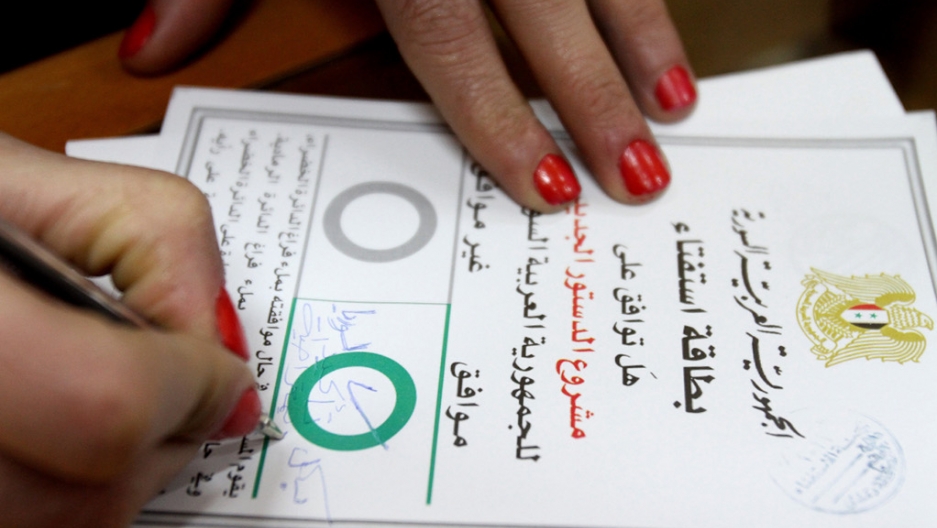 A Syrian woman checks 'Agree' on a ballot card and adds 'Definitely yes for a democratic Syria' before casting her vote on a new constitution at a polling station in Damascus on February 26, 2012.
Credit: ANWAR AMRO
Share

Syria is today holding a referendum on a new constitution – a day after activists said 89 people had died in continuing violence across the country, the Associated Press reported.

Polling booths opened at 7am local time in a vote that calls for multi-party parliamentary elections within three months.

The government of President Bashar al-Assad claims the move will ends the ruling Baath party's five decades of domination, but the vote has been dismissed – and is being boycotted – by opposition groups.

An estimated 14.6 million people are eligible to vote at 13,835 polling stations on whether to approve or reject the constitution, Al Jazeera reported.

Despite the continuing unrest, with the London-based Syrian Observatory for Human Rights claiming at least a further two deaths in fresh fighting on Sunday, authorities moved ahead with the vote.

Western nations question the credibility of the vote given the volatile situation in Syria, with the third city of Homs enduring weeks of relentless shelling by government security forces.

Washington called the vote "laughable," while at a news conference in Istanbul, the Turkish Foreign Minister, Ahmet Davutoglu, said conditions surrounding the referendum were unrealistic.

"On one hand you say you are holding a referendum and on the other you are attacking with tank fire on civilian areas ... You still think the people will go to a referendum the next day in the same city?" Davutoglu said.

Reports on state television have been broadcast instructing citizens on how they can vote, and holding discussions on the new draft constitution, the BBC reported.

Meanwhile the International Committee of the Red Cross said it had made no progress on Saturday in its efforts to evacuate those trapped in the Baba Amr neighborhood of Homs.

Among those waiting to be rescued are two injured Western journalists, Frenchwoman Edith Bouvier, and British photographer Paul Conroy.