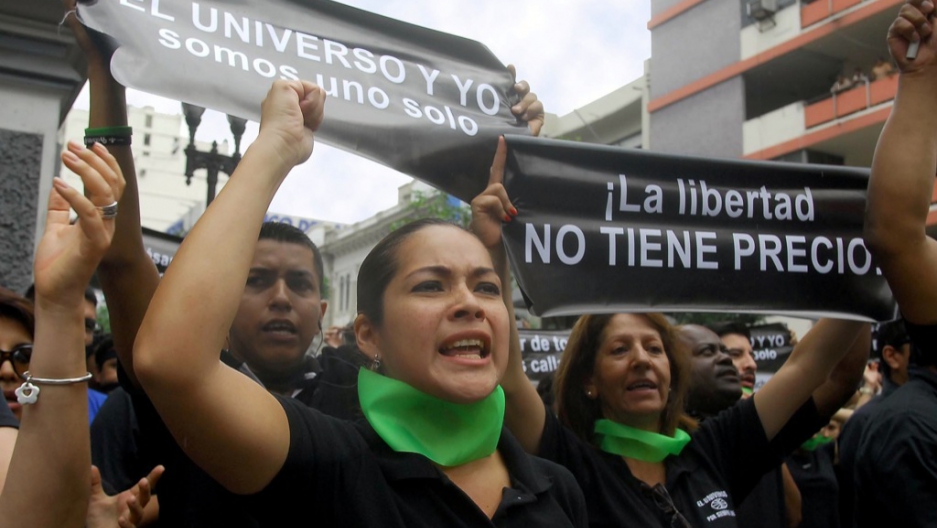 That is the interpretation of journalism and human rights groups of a vaguely-worded new law, which took effect earlier this month, preventing supposed media bias in electoral coverage.

The controversial piece of legislation is the latest chapter in a series of legal and political assaults on the media by the Correa administration that critics claim is the worst government threat to freedom of expression in the Western hemisphere.

Promoted by Correa, the law bans journalists from publishing or broadcasting reports or even editorial pieces that could “have a bearing, in favor of or against, a specific candidate, proposal, option, electoral preference or political thesis.”

That has left Ecuadorean journalists scratching their heads and wondering what electoral coverage might be acceptable — other than simply publishing transcripts of candidates’ speeches.

More on Ecuador: President Correa throws himself a party

According to Cesar Ricuarte, executive director of Quito-based journalism think-tank Fundamedios, the measure even mandates that Ecuador’s national electoral commission establish an agency to approve reporting on the elections — before it has been published.

“The new law is ambiguous and ill-defined and is destined to promote prior censorship,” Ricuarte told GlobalPost. “It does not just limit the freedom of the press. It undermines the rights of citizens to have basic information about candidates.”

It is the latest development in a series of moves by the Correa administration that have gutted the Ecuadorean media’s ability to scrutinize its activities, according to the New York-based Committee to Protect Journalists (CPJ).

“Ecuadorean democracy has suffered some big blows,” said Carlos Lauria, the CPJ’s senior Americas researcher. “The Ecuadorean government’s intolerant and confrontational approach towards the media is fostering censorship and self-censorship. Democracy is going to suffer.”

Correa, 48, a firebrand leftwing economist, came to power in 2007 promising to overturn what he views as Ecuador’s corrupt political establishment.

A key part of that establishment, the president says, is Ecuador’s commercial media, and he regularly launches diatribes against journalists, whom he accuses of “lying” and “ignorance.”

He has also used Ecuador’s criminal defamation laws — viewed by freedom of speech and human rights campaigners as antiquated and repressive — to silence his critics.

Last week, Ecuador’s highest court upheld a $42 million fine and three-year jail sentences for the owners of El Universo, the country’s second best-selling newspaper, and commentator Emilio Palacio, after Correa sued them over a provocative op-ed published in February 2010.

In the column, Palacio repeatedly referred to the democratically-elected Correa as “the Dictator” and accused him of ordering soldiers to open fire on civilians during an army mutiny in 2009 during which Correa was taken prisoner and only released after a shoot-out with loyal troops.

If the fine is imposed, it is likely to shutter El Universo, founded more than 90 years ago. Meanwhile, Palacio and one of the three Perez brothers who own El Universo are seeking political asylum in Miami. Another of the Perez brothers is holed up in the Panamanian embassy in Quito, also seeking asylum.

Meanwhile, a judge involved in the case has fled Ecuador claiming that Correa’s lawyers attempted to bribe her into providing a verdict favorable to the president, the Miami Herald reported.

The CPJ’s Lauria declined to defend the contents of Palacio’s column but insisted that Correa’s administration should be removing criminal defamation from the statute books rather than using it to intimidate journalists.

A growing number of Latin American countries, including Mexico, Brazil and El Salvador, recently have phased out criminal defamation, a relic of the colonial era when a man’s “honor” was viewed as paramount.

That prompted a typically robust response from Correa, who has been increasingly angered by the commission's advocacy of freedom of expression issues and has called for it to be replaced by a regional organization that would, he argues, be independent of Washington.

“We know what’s happening on an international level and it reaffirms our struggle for a new inter-American system,” Correa said in a statement.

But media pressure in South America is mounting against Correa. A Colombian newspaper association agreed to reprint the Palacio piece and called the case “an unprecedented attack against freedom of expression.”

“The tone of Palacio’s column may be too aggressive,” Lauria told GlobalPost. “You may not like the wording, but it is an op-ed! The message is clear; if you write critical op-eds, be careful. This is what will happen to you.”

Other attempts by the Correa administration to control press coverage include the increasing use of “cadenas,” compulsory on-air government rebuttals of reports. From Correa’s inauguration in 2007 to the end of last year, there were 1,025 cadenas, according to the CPJ, often interrupting news shows for several minutes at a time.

Meanwhile, the government has massively increased its participation in Ecuador’s media market, crowding out dissenting voices. When Correa came to power, the state owned a single radio station. It now owns five TV stations, four radio stations, three newspapers, one magazine and a news agency, according to the CPJ.