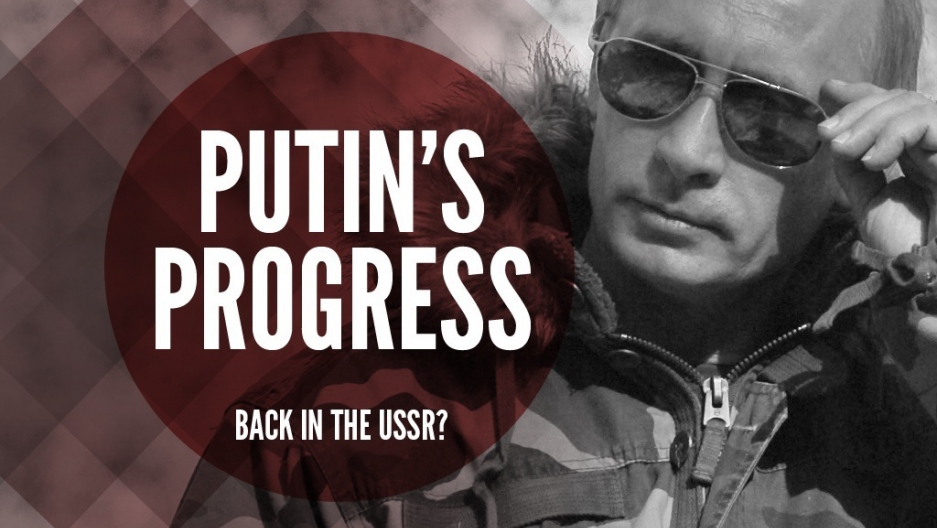 Editor's Note: This article is part of an ongoing series about President Vladimir Putin's efforts to remake Russia. Read previous articles about the "Eurasian Union" and efforts to regain Moscow's superpower status.

MOSCOW, Russia — Just a week before Russia’s presidential election, it is clear Prime Minister Vladimir Putin will dominate the vote, despite mass protests and government criticism that have swept the country since December.

Putin is expected to win nearly two-thirds of the vote and avoid a run-off election, according to the latest poll published Friday by Russia's largest independent pollster Levada Center.

The prime minister's approval has slipped below 50 percent after alleged vote rigging in the parliamentary election on Dec. 4, backed up by video evidence. However, his rating has recently climbed, the poll shows.

Putin has been working hard to regain public confidence. After the parliamentary elections, he fired the deputy prime minister, Vladislav Surkov, who was known as the architect of the "managed democracy" system under Putin, which provides central control and allows government leaders to keep a strong grip on the political process.

Read more: Who's the opposition?

Putin has also held large rallies to whip up support.

Thursday’s turnout at Putin’s rally, which took place on the “Defenders of the Fatherland” holiday and was attended by the man himself, gathered about 130,000, according to official estimates.

Throngs of Russians, mostly working-class, middle-aged employees of state facilities such as schools, plants and orphanages, marched merrily through the overcast, sludgy streets down Frunzenskaya Embankment in South Moscow to the Luzhniki stadium.

They sang folk songs, chanted pro-Putin slogans and carried posters, banners and flags. Slogans included, “We are for Putin, and he is for us,” “We like him,” “Stability,” and a flag with an image of Putin’s face and the words “No to revolution,” in orange letters, probably a reference to Ukraine’s Orange Revolution, after which pro-Western Viktor Yushchenko became president.

“If you have seen plastic toys in place of where meat should be, you know the difference between before Putin and after Putin,” said Evgeny Babenko, 52, a Moscow doctor, in reference to the empty store shelves of the 1990s. “Our children and grandchildren are growing up, we’d like to live normally.”

“We have enough of everything, you can see what will happen tomorrow,” Yelena Yegorova, 49, who works in a children’s home in western Moscow said. “We lived through so much in the '90s. We suffered enough. We just want peace, stability.”

After the poverty and the political upheavals of the 1990s, the economic growth and stability of the last 12 years that Putin has been in power are a major draw for many Russians. The gross national income per capita went from $6,660 in 2000 to $19,190 in 2010, according to the World Bank.

But Russia is famous for Potemkin villages — illusions.

“We are all forced to be here,” whispered a 31-year-old state electric plant engineer, as Moscow mayor Sergei Sobyanin praised the enormous turnout at the rally from a makeshift stage in the center of the stadium.

The engineer asked to remain anonymous for fear of repercussions from his job. He said the plant sent 150 of its staff of 250. First management asked for volunteers, but when there wasn’t enough interest, employees in relatively good health and with no small children at home were forced to go.

Refusal to attend would have resulted in pay cuts and demotions in rank, he said. Out of his 150 colleagues at the rally, the engineer, who attended the anti-government protests in December and February, did not know anyone who honestly supported Putin.

After fiery speeches by Sobyanin and rabid anti-Western celebrity Mikhail Leontyev, Putin appeared on the stage, amid the falling snow and an explosion of cheers, to give an impassioned address to his electorate. He spoke of love for Russia, under threat from foreign enemies, and the need to unite and defend the country.

“We won’t let anyone impose their will on us, because we have our own willpower! It always helped us win in all times! We are winners! It’s in our genes, our genetic code!” Putin said in a voice cracking with emotion.

At this point two women turned away from the stage and walked out. “Genes,” one woman muttered angrily under her breath.

“I dream that in the soul of every person there will be hope, a hope for a better life and happiness,” Putin continued.

A Moscow elevator factory worker said he was enticed to attend the rally by the 5,000 rubles added to his paycheck this month. “I don’t know or understand much about any of this,” he said.

One clearly intoxicated man, who works as a manual laborer for a Moscow government agency, said he was given Friday off in return for showing up.

Halfway through the rally, Luzhniki began to empty out. Less than an hour after the demonstration started, a steady stream of people was leaving, many to board a long line of buses waiting outside.

To boost numbers, attendees were brought from other regions, including the Urals, the Caucases, and even as far as Siberia.

The Luzhniki rally was the second pro-Putin demonstration to attract tens of thousands people. On Feb. 4, the frigid day of the latest mass opposition protest on Bolotnaya Square, about the same number of people showed up to Poklonnaya Gora in western Moscow. Last weekend the opposition staged an auto-rally, where motorists circled the Kremlin in cars decorated in white and anti-Putin slogans. Government-affiliated youth groups staged a rival rally with cars circling around the Garden Ring.

On Sunday the opposition will hold a fourth two-part mass demonstration for fair elections, called the “Big White Circle." Participants will form a human chain around Moscow’s 9-mile long Garden Ring road, then hold a rally in Revolution Square, located near the Kremlin. Pro-Putin supporters will hold a rival rally in Triumfalnaya Square, a site for opposition protests.

“They are like monkeys,” said opposition leader Boris Nemtsov of the matching demonstrations.

“It’s just that our rallies are much better organized,” she added.

Many fear provocations Sunday from Kremlin-affiliated youth groups, which in the last two days allegedly began showing up in large numbers and reserving tables for hours at Moscow bars and restaurants popular with journalists and opposition.

Earlier this week a scuffle broke out when opposition and pro-Kremlin youth group Rossiya Molodaya, or young Russia, tried to register rallies on March 5.

Despite Putin's seeming comeback, efforts to monitor polling places have been stepped up amid fears of election fraud. Falsified elections remain a big risk because the fraud-friendly system is so firmly in place, the government can't work any other way, said Dmitry Oreshkin, a political analyst and a member of the Presidential Council for Human Rights.

“The electoral machine will do what the authorities want," Oreshkin said. "Each district manager has to reach a quota to keep his position, to show that he can control his people."

Back at Luzhniki, the engineer uncomfortably shifted his tall frame, his hat pulled low over his forehead and the collar and hood of his leather jacket partially hiding his face. “I’m going to the 'Big White Circle' Sunday,” he said while Sobyanin was praising Putin.

His dejected expression slightly brightened, but only for a moment. He won’t vote for Putin in the upcoming elections, which he believes will be falsified.

His friend who works at a Moscow electric company was recently asked to stuff ballots on election day, he said.