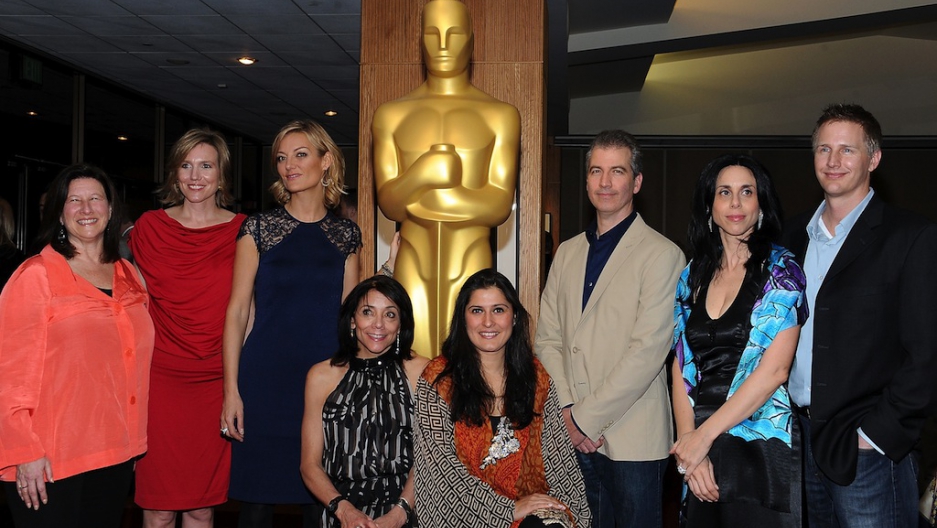 Pakistan's first Oscar nominated filmmaker, Sharmeen Obaid-Chinoy (fifth from the left), with other nominated filmmakers at a reception party for the Academy of Motion Picture Arts and Sciences on Feb. 22, in Beverly Hills, California.
Credit: Valerie Macon
Share

A refused marriage proposal, problems with in-laws, being born a girl—these are the reasons why assailants disfigured Irum Saeed, Manzoor Attiqa, and Najaf Sultana with hydrochloric or sulfuric acid.

This kind of terrorism of young women is the haunting subject of Sharmeen Obaid-Chinoy and Daniel Junge’s Oscar nominated short documentary, “Saving Face.”

Investigating the hideous and hideously increasing trend of acid attacks, the filmmakers follow plastic surgeon Dr. Muhammad Jawad and the victimized women he tries to help.

“There are over 100 acid attacks reported in Pakistan every year,” begins one of the documentary’s trailers. The next line fades in: “Many more go unreported.”

An increasing problem since the 1980s, acid attacks are a plight not limited to Pakistan. Instances in Southeast Asia periodically make the news. Thousands of Bangladeshi women suffer from this gender-specific attack.

But this social disease inflicts the West as well. Bresles, France, Mesa, Arizona, and Vancouver, Washington are all confirmed sites of acid attacks. Perhaps the 2008 case of London model and TV presenter Kate “Katie” Piper is the most well-document and publicized instance. The documentary that followed, “Katie Pieper: My Beautiful Face,” brought much-needed attention to the struggle of acid attack victims.

Jawad operated on Piper, employing a new surgical technique. To restore her face, her melted skin was removed and then replaced with a synthetic foundational skin, onto which skin grafted from her body was later applied.

On May 10, 2011, the Lower House of Parliament in Pakistan unanimously ratified the Acid Control and Acid Crime Prevention Bill. Under the law, assailants could face life imprisonment. However, successful prosecutions have proven difficult.

In 2011, a court official in Pakistan’s Khost province said, “I have not recorded a single case of violence against women. Security concerns, strong or deep-rooted traditional customs and the psychological obstacles of shame and fear prevent women from bringing their cases to court.”

In a recent interview, Obiad-Chinoy told NPR: “There’s a mind set that it’s ok to be violent against women, especially if it’s someone in your family. Most times the women are to scared to press charges against them”

The harrowing visuals of these brutal attacks are difficult to forget, and that will likely draw a few Academy votes and viewers to "Saving Face." But it is the story of women transcending destructive social restrictions, and overcoming physical and psychological trauma that will make an indelible mark.

"This is a story of hope and courage. The real heroes of course are these two patients we feature, who've been so forthcoming in such a conservative society to take it on the neck and say: 'this cannot carry on.' In a way this was about me saving my own face, and owning up to my responsibility to the country of my origin."