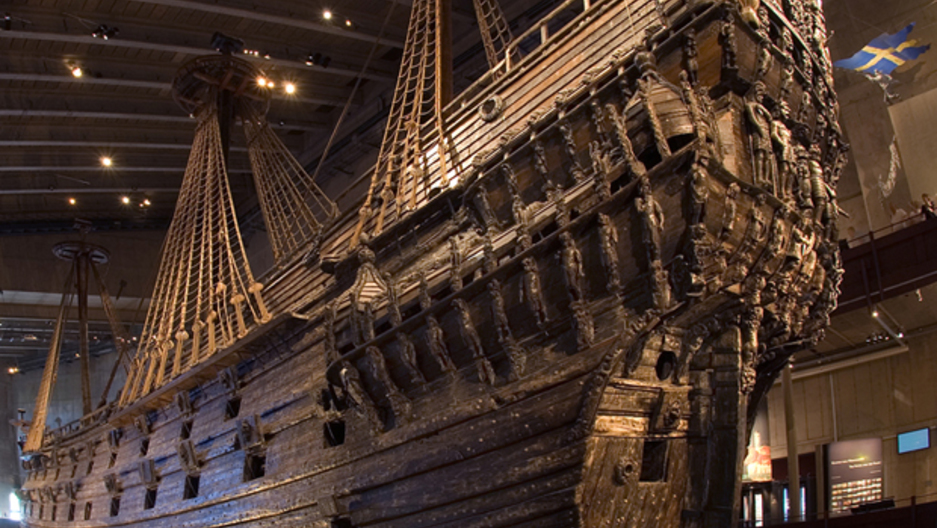 The Swedish warship Vasa sunk in the 1600s, shortly after it was launched. (Photo by Karolina Kristensson.)

In 1628, the Swedish warship Vasa sank on its maiden voyage.

Over the centuries, many have tried to explain what caused that embarrassing and deadly mishap. Researchers in Stockholm have now conducted a detailed examination of the 17th-century vessel, and they’ve found new clues as to why it sank.

Step inside the ship, which is on display at Stockholm’s Vasa Museum, one of Sweden’s most popular tourist destinations, and you’re greeted by a breathtaking sight: the bow of a nearly 400-year-old wooden warship.

It looks like something out of the movie “Pirates of the Caribbean.”

“It’s like a piece of art,” said Susanna Valleros, a guide at the museum.

The ship, especially its stern, is covered with wooden sculptures.

“They’re very beautiful, of course, but the main use of them was to tell us things about the royal family, the king,” Valleros said.

The King of Sweden at the time was Gustav II Adolf, the man who ordered the building of the ship. At least a million people visit the museum every year, but Valleros says what draws visitors is more than just the beauty of the ship.

“The story is also quite special and tragic," Valleros said.

Vasa set sail on her maiden voyage Aug. 10, 1628. At the time, she was the most powerfully armed warship in the world, with 64 bronze cannons.

About 20 minutes into her journey, the ship was hit by two strong winds. It heeled to port, water gushed in and the ship sank less than a mile into the journey; 30 people died.

An inquest concluded the ship had been unstable. But the reasons behind the instability have remained a point of debate over the centuries.

Fred Hocker, an archaeologist at the Vasa Museum, has been trying to find some definitive answers.

“We have, over the last three years, measured every single piece of the wood in the ship,” Hocker said. “If we want to understand how the ship was built, that’s what it takes.”

Hocker’s meticulous measurements paid off. They gave him fresh insight into what made the Vasa unstable. For one thing, the ship was asymmetrical, more so than most ships of the day.

“There is more ship structure on the port side of the hull than on the starboard side,” Hocker said. “Unballasted, the ship would probably heel to port.”

No wonder the ship tipped to the port side when the winds hit. But why was the ship so lopsided?

While examining the ship, Hocker discovered four rulers the workmen had used. Those rulers were based on different standards of measurement.

Two were in Swedish feet, which were divided into twelve inches. The other two were in Amsterdam feet, which had eleven inches in a foot. So each carpenter had used his own system of measurement.

“When somebody tells him, make that thing four inches thick, his four inches is not going to be the same as the next guy’s four inches,” Hocker said. “And you can see those variations in the timbers, as well.”

But that wasn’t the only reason the ship sank. Hocker said the Vasa was also top-heavy.

People in the 17th century were aware of that fact, but they didn’t understand what made the ship top-heavy, or whom to blame for the poor design. Some historians and military architects have blamed the King. They thought he interfered with the ship’s dimensions after the construction had begun.

But Hocker’s measurements offered no evidence to support that theory. He uncovered a simpler cause.

“The deck structure is simply too heavy,” he said. “It’s heavier than it needs to be to carry the guns that Vasa was armed with.”

Why were the decks so heavy? Hocker studied historical documents and found that the shipbuilder, a Dutch man named Henrik Hybertsson, had never built a ship with two gun decks or with so many guns.

He thinks Hybertsson erred on the side of caution and made the decks heavier than they needed to be.

In other words, as Hocker puts it, “the design was simply flawed from the beginning.”

Despite its unfortunate end, the ship was lucky in one regard; it sank in waters that helped preserve it for more than three centuries.

Since it was brought up, the ship has provided a rare glimpse of life in the 17th century.

Now that Hocker and his colleagues have uncovered the reasons behind the Vasa’s sinking, they’re working on a more pressing problem: how to preserve the ship now that it is out of the water, to ensure that people can see it, and hear its story, for centuries to come.