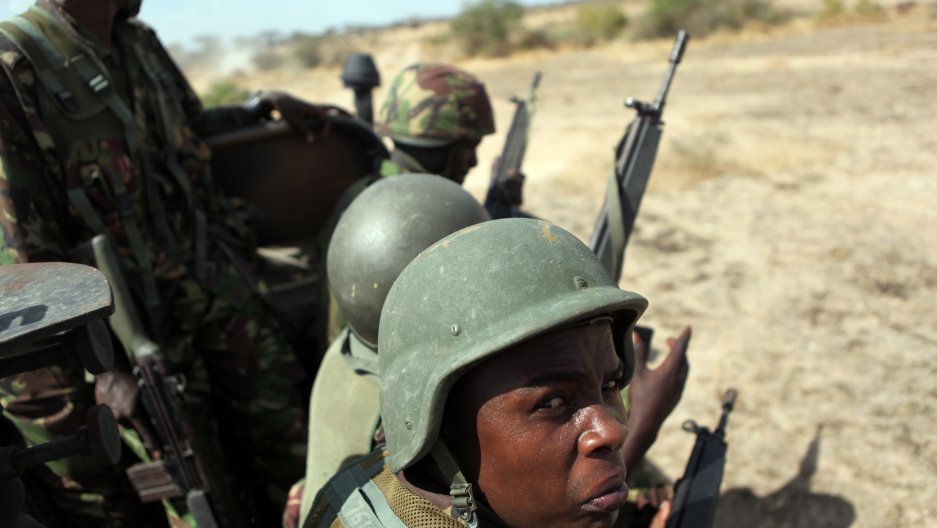 TABDA, Somalia — Tabda was one of the first towns seized by the Kenyan army when it invaded Somalia in mid-October, but it’s hardly a town at all. A village of sticks and rags, Tabda bakes in the relentless clear-skied sun.

There’s no electricity here, no running water, no school, no hospital and the road is made of the same sun-bleached dirt that spreads as far as the eye can see in every direction.

The people are mostly pastoralists — animal herders — but their animals are mostly dead thanks to a persistent drought that became a famine last year.

A mile from this pre-industrial scene is the Kenyan military base. Sandbagged trenches ring a collection of tarpaulin tents and camouflage netting thrown over tanks, artillery pieces and Humvees. Helicopters come and go. Soldiers blink away the sweat as they peer over their machine gun sights at the unforgiving landscape, on the look out for Islamist militants.

But Al Shabaab is nowhere to be seen. Kenyan commanders say that in the early days of the invasion they fought daylight battles with large groups of Shabaab fighters but in the face of Kenya’s greater firepower they have changed tactics.

“The Shabaab are burying their weapons during the day in order to engage at night,” said Brigadier Johnson Ondieki, commander of Kenya’s land forces. “They operate in small groups of five to 15, laying ambushes and IEDs.

“These are not major engagements but probing attacks,” he said. Nevertheless the attacks come every few nights, according to the soldiers in Tabda, one of a series of towns and villagers that were largely unknown until the Kenyan military trumpeted their capture.

The Kenyan soldiers have been here, 50 miles inside Somalia, for over four months and have scarcely moved. The Kenyans have another military base a further 30 miles down the road at a place called Billis Qoqaani. That, too, was taken during the initial invasion but the Shabaab held the town of Afmadow and its key stronghold of Kismayo on the Indian Ocean remains well out of reach.

Al Shabaab is also under pressure elsewhere in Somalia, from African Union peacekeepers in the capital, Mogadishu, and Ethiopian forces in the West.

Kenyan politicians promised a quick victory against the “rag-tag” Shabaab but military commanders on the ground are playing it more cautious.

“Forward advance is not as critical as pacification of liberated areas,” said Brigadier Ondieki. “Time is not important to us. Our aim is not to acquire land but to secure the areas.”

This is not as disingenuous as it sounds. Ethiopia’s US-backed 2006 invasion of Somalia was lightning-fast and foundered for exactly that reason. Behind the advancing soldiers the vacuum was quickly filled by Al Shabaab, then a newly emerged Islamist guerilla resistance movement.

Kenya is moving more slowly, hoping that humanitarian aid and local governance will back up their invasion, but neither are coming. Aid agencies are wary of being co-opted into Kenya’s military efforts and local administrations are armed to the teeth and divided.

Standing alongside the most senior Kenyan commander in Tabda is Sheikh Ahmed Madobe, commander of the Ras Kamboni militia, a Somali group that is allied to the Transitional Federal Government (TFG) in Mogadishu and is fighting alongside the Kenyan army.

“We are fighting to bring peace to the Somali people,” Madobe said, repeating an argument made by any number of armed groups during Somalia’s two decades of civil war.

Ras Kamboni officials are busily establishing an administration in Dhobley, a border town and the main center in this part of southern Somalia. Since the Kenyan invasion, money from the Somali diaspora in the Gulf has paid to reopen a primary school where children are taught in Arabic in freshly-painted classrooms, offering some respite from the war.

Nearby the hospital has also been refurbished with a new tin roof, some cement smeared over bullet holes and electricity provided by a diesel generator.

The only doctor — a surgeon from Mogadishu working for the World Health Organization (WHO) and training local medical staff — says these are signs of a gradual improvement. “It’s stable,” Dr. Omar Bile saud, “but it is not yet peace. There are gunshots every night."

More from GlobalPost: Turkish Airlines to fly to Mogadishu

The gunshots have nothing to do with the Shabaab, however, who were pushed out of Dhobley months ago.

Ras Kamboni is not the only militia aspiring to run the place. Wearing camouflage uniforms with Somalia flags on the sleeves are members of the Azania militia. For now the two are working side-by-side with each other and the Kenyan army but there is neither love nor trust lost between either the Azania and Ras Kamboni footsoldiers or leaders.

After speaking to Ras Kamboni fighters, the Azania militiamen drag me aside to complain bitterly that they are being neglected by Kenya and pushed around by Madobe’s men.

Both militias are allied with the TFG but among the sidelong glances and bitter words spat across this bullet-riddled town it’s easy to see how, when the Kenyans move on, the militias might turn on one another, plunging this part of Somalia into yet another round of conflict.

More from GlobalPost: Somalia has 2 parliaments, no unity