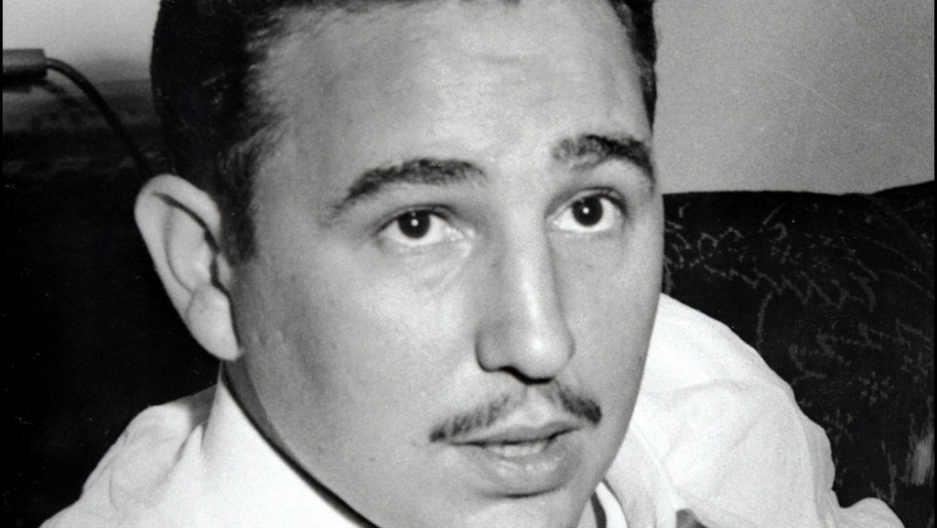 Portrait of Fidel Castro in New York in 1955, during an interview.
Share

HAVANA, Cuba — Fidel Castro was 28 years old and fresh out of prison when he left Cuba for Mexico in July 1955. He’d return a year-and-a-half later with a boatload of armed men — among them Ernesto “Che” Guevara — to wage guerrilla war and eventually win his against-all-odds Cuban Revolution.

The events of those 18 months in Mexico receive expansive treatment in the new two-volume, 1,000-page memoir published this month by the 85-year-old ex-“comandante,” “Guerrillero del Tiempo” (Warrior Across Time).

A limited number of copies have begun to circulate on the island. The book only takes readers up to 1958, leaving the Bay of Pigs, the Cuban Missile Crisis and other critical events of Castro’s 47-year rule for future installments.

Illness forced Castro to cede power to his younger brother Raul in 2006 — first temporarily, then permanently — and since then his absences from public life have periodically sparked rumors of his death.

But the launch of “Guerrillero del Tiempo” should squelch those rumors for a while.

Castro’s book presentation this month went on for six hours, and he followed it soon after with another conference joined by adoring global activists and leftist intellectuals. That meeting stretched nine hours.

They were Castro's first public appearances since last April.

The memoir isn’t the most dramatic chapter of Castro’s life story, at least compared to his failed assault on Cuba’s Moncada military barracks in 1953 or his 1956-1958 guerrilla campaign to topple strongman Fulgencio Batista. But Castro’s Mexico chronicle makes for fascinating reading about the man before he was myth, when his biggest worries were ducking the Mexican police and scrimping together money and weapons — not squaring off against the United States.

Much of Castro’s other writings can be dry, differing little in tone from his speeches. But “Guerrillero del Tiempo” is based on interviews with biographer Katiuska Blanco, and reads more like an oral history, with Blanco making a determined effort to draw out Castro’s storytelling. A more personal and less rhetorical version of the man emerges.

More from Cuba: Is the pope a change-agent in the revolutionary island?

The young insurgent’s preparations in Mexico make for some of the most interesting sections of the book, a reminder to readers of Latin American history that Cuba’s revolution would probably not have been possible without the Mexican Revolution that preceded it 50 years earlier.

“Mexico was a country that had carried out a great revolution in the second decade of the 20th century, a revolution that had a lot of prestige and left behind a lot of progressive thinking and a stable government,” Castro recalls, explaining that he hadn’t picked Mexico as his launch pad merely for geographic convenience. “Every other nation in the region was ruled by tyrants.”

Just 22 months after Castro and his followers were arrested after staging their disastrous attack on the military garrison, killing several Cuban soldiers, Batista caved to public pressure and let the rebels out of jail. Castro lingered on the island a bit, but soon left for Mexico to embark on his grand plan of building a rebel army and overthrowing the US-backed Batista government.

Boarding a small tourist flight to the Mexican resort city of Merida on July 7, 1955, Castro vowed to reporters: “One does not return, or if one does, it is with tyranny beheaded at our feet.”

Within days Castro was in Mexico City, living on rice and beans, trying to raise money for the cause. He frequented taco stands and learned to like the country’s spicy cuisine, taking in bullfights with his younger brother Raul on Sundays.

From Mexico Castro went on a fund-raising tour to the US, stopping in New York, Philadelphia, Miami and other cities, asking Cuban immigrants to support his cause.

“It was hard to ask them for money since most were so poor, but they made small contributions,” Castro recalls. “The trip was a political success, but not much of an economic one because most of our audiences were poor, humble people. I think we collected about $1,000.”

It was in Mexico where Castro was introduced to Guevara, a young Argentine doctor who had witnessed the CIA-backed 1954 coup to overthrow Guatemala’s left-leaning president. The Cubans were impressed with the young radical, but Castro remembers him as “suffering from asthma and very poor.”

That Castro gave several key responsibilities to Guevara — an Argentine — raised some grumbles among the Cubans who “didn’t want a foreigner giving them orders,” Castro says.

In time, he adds, “no one had any doubts about fighting alongside Che and taking orders from him.”

But Guevara would also cause trouble for Castro when Mexican authorities caught the Cubans stockpiling weapons and arrested them, a huge setback for Castro. Guevara “thought it was his duty to argue with the police and the judges!” Castro recalls, explaining that it was thanks to Guevara’s “fervent Marxist-Leninist statements” that the two men ended up spending several extra weeks in jail.

Among the other curious but little-known stories in Castro’s Mexico recollections was a trip to the US-Mexico border at McAllen, Texas, where Castro swam across the Rio Grande and snuck into the United States illegally to meet with disgraced former Cuban President Carlos Prio Socarras in a motel room.

The two men shared a common enemy — Batista — but Castro said he was “humiliated” to ask Prio for money that he knew had been stolen from the Cuban Treasury.

The voyage was blown off course, the men fell sea sick, ran out of provisions, and eventually shipwrecked on the south coast of Cuba. Spotted by the Cuban air force, Castro’s forces were soon decimated in an ambush and sent fleeing for the mountains, with his entire force consisting at one point of just eight men and seven guns.

For Cuban readers compelled to memorize the minutiae of Castro heroism as school children, there may be less of interest in the new memoir, but historians and foreign audiences should find plenty to dig into once the book is more widely distributed.

In 2010, Castro published “The Strategic Victory,” an 800-page account of the guerrilla campaign that brought him to power on Jan. 1, 1959, but “Guerrillero del Tiempo” only devotes about 50 pages to that period of his life.