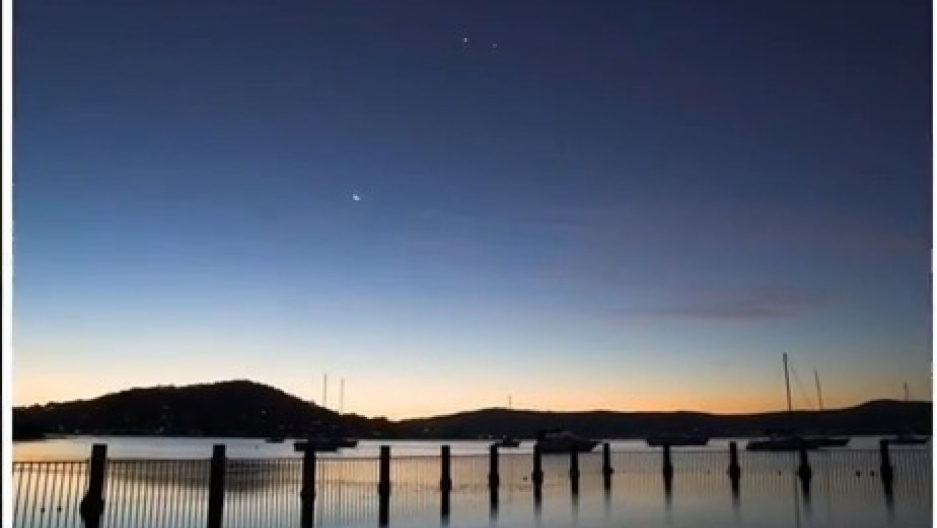 Jupiter, Venus and the Moon will form a triangle in the night sky on Feb. 26 and 27.
Credit: NASA
Share

Three of the brightest objects in the sky will converge this weekend in a spectacular show.

The alignment of Jupiter, Venus and the Moon – an event known as a triple conjunction – will be visible from everywhere in the world on Saturday and Sunday night.

Jupiter and Venus have been steadily converging throughout February, NASA explained, starting off about 20 degrees apart in the middle of the month and finishing 10 degrees apart at the end of it. The movement will continue until just 3 degrees separate them in mid-March.

This weekend only, the planets are joined by the crescent Moon as it makes its monthly orbit around the Earth. Together, the three bodies will form a "slender heavenly triangle," NASA said.

According to Space.com, the conjunction will grant skywatchers an unusual view of the Moon:

"If you look just above and to the left of the crescent, you will see the rest of the Moon illuminated by the ghostly light of the planet Earth. With binoculars or a small telescope you can even see the seas and craters on the so-called "dark side" of the moon, lit by earthlight."

Those who watch the show both nights will also be able to track the movement of the Moon on its path around Earth, using the two planets as markers. It will appear closer to Venus on Saturday, but will have moved across to Jupiter by Sunday.

And if you can't face watching outdoors, the Slooh Space Camera will be live-broadcasting the view from multiple observatories, from 9:30 PM EST both Saturday and Sunday.

Learn more about planet alignment with this NASA video: