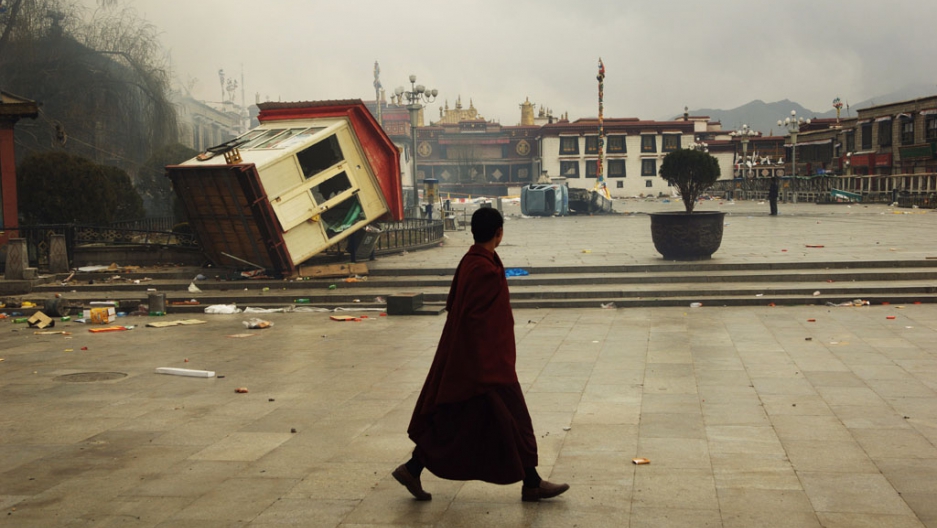 A Tibetan monk walks past an overturned barrack in Lhasa, the capital of the Tibet Autonomous Region, on March 14, 2008.
Credit: AFP
Share

XINING, China — Across the Tibetan plateau, a sweep of China larger than western Europe, a desperate and distressing form of protest has taken root.

In recent months, nearly two dozen Tibetans have set themselves on fire, disappearing into flames. For most, it's a final act of defiance against China’s governance.

With so much of the area under police and military lockdown — foreign journalists, diplomats and even tourists have been barred from spots across the plateau — it’s difficult to decipher exactly what is happening.

But the roots of the problem run deep.

“It’s been building up over many years,” said Tsering Tsomo, executive director of the Tibetan Centre for Human Rights and Democracy. The organization is based in Dharamsala, India, home of the Tibetan government-in-exile.

“When you look at the whole history of Chinese rule in Tibet, it’s all about the way the Chinese government has responded to Tibetan concerns,” she said. “That is what has taken us to this stage.”

More to the point, experts say, today’s discontent in Tibet is linked directly to 2008, when China implemented strict controls after riots reportedly killed 19 people in Lhasa.

Since then, the Chinese government has clamped down on all Tibetan areas, particularly monasteries, the center of Tibetan culture and religion. They have demanded that monks participate in “patriotic education," and government committees have been placed in control of monasteries. It now seems China’s relationship with Tibetans has worsened rather than recovered.

In response to the recent protests and self-immolations — what some are calling the “Tsampa Revolution” (a nod to the Tibetan barley-flour staple) — China has increased military and police forces well outside of Tibet proper and into parts of several other provinces where Tibetans live.

Chinese media report that local officials have been ordered to “prepare for war” in Tibetan areas.

"For those irresponsible officials who walk away from their duties, fail to implement policies or are found guilty of dereliction of duty in maintaining stability, they shall be immediately removed from their posts, pending punishment, regardless of how great the contributions they made in the past or what kind of position they held," Chen Quanguo, Communist Party chief of Tibet, was quoted by the Tibet Daily as saying earlier this month.

Monks under pressure across Tibet

At several monasteries on the northern sweep of the Tibetan plateau, the scene is quiet, but the mood is grim. Most protests and self-immolations have taken place south of here, but the news of protests has traveled far and wide.

At one monastery, the monks are eager to talk about the Dalai Lama, whose photos still take places of honor in temples and halls. The monks know all about what has happened in Aba (Ngaba in Tibetan), the Tibetan part of Sichuan province now under military lockdown, and are up-to-date on exactly how many protesters have set themselves on fire in recent months.

With awe, they described those who have self-immolated as “great.”

Chinese New Year at the end of January, they say, was major test for Tibetan monasteries. Monks were ordered to celebrate the holiday, even after many had perished in protest or clashes with Chinese security forces.

“Too many of our people have died,” said one monk. “None of the monasteries celebrated. ... The government imposed strict controls on us.” Those controls involved the police, paramilitary and in some cases, the army.

Monks said the situation has quieted somewhat since the new year, but deeply rooted problems remain.

The Tibetan New Year on Wednesday and the mid-March anniversary of Tibetan uprisings against Chinese rule could aggravate the situation. Tibetan groups outside of China are calling for hunger strikes, while Chinese media inexplicably paint the situation as festive.

Beyond the annual reoccurrence of these “sensitive” dates, Beijing now appears to be playing a waiting game with the Dalai Lama, perhaps hoping the problem goes away when the elderly monk dies.

Tibet scholar Robbie Barnett of Columbia University noted that these past 25 months are the longest period in a decade that China has gone without negotiations with Tibetan leaders-in-exile.

With government-led committees, rather than monks, now controlling every Tibetan monastery, the Kumbum Monastery (known in China as the Ta’er Si) in Qinghai province gives a glimpse of what Tibetan culture might look like for a while to come. At one of the most important monasteries in Tibetan Buddhism, tourism has taken clear priority over dogma.

A ticket is nearly $13 to enter the monastery, where talk of the turmoil that is sweeping across the Tibetan plateau is not welcome. Chinese tour groups move through the temples and alleys, swiping vouchers across electronic card readers posted at each entrance and listening intently as their guides tell a light and breezy tale of Tibet.

Guides at the Kumbum Monastery don’t discuss the Dalai Lama, the Tibetan spiritual leader that China’s government has so worked hard to paint as a dangerous radical. His photo is absent from halls and temple buildings, unlike in other enclaves across the northern sweep of the Tibetan Plateau.

“Lots of tourists ask me, but the monastery doesn’t allow us to talk about these things,” said a Tibetan tour guide.

“It’s outside the scope of what we should talk about,” she continued. “We’re supposed to talk about the history and culture of the temple, the artwork, the lives of the lamas, their food and customs, these things.”

Kate Saunders of the International Campaign for Tibet said the current situation has raised fears over whether Tibetan culture will survive what many see as a sustained attack.

“Tibetan Buddhism is an integral element of Tibetan identity, and virtually every Tibetan is connected by their loyalty to the Dalai Lama,” Saunders explains.

“Even while many Tibetans believe that the essence of their religion and culture will ultimately outlast the Chinese Communist Party, they share a very real fear about whether their identity can survive current levels of repression,” she said. “For Tibetans, this is a life and death struggle at a dark time in their history, and the self-immolations indicate their resolve as well as their anguish.”

There is public silence at Kumbum Monastery about the rash of protest and unrest sweeping across China’s Tibetan regions. Monks, who not long ago numbered more than 1,300 at this monastery, were few and far between on a recent afternoon, mostly kept to sweeping up and other menial tasks.

The tour guide says there are still 600 monks here (other sources say the number is 400), but only a dozen or so were working in plain sight.

The quiet of the place and the absence of large groups of both Tibetan monks and pilgrims may indicate a deeper problem.

“The whole [Chinese government] policy toward Tibet is to have an incredibly active religious life that tourists can see,” he said. “You have to look at what is missing. The simple question is: where are those people?”