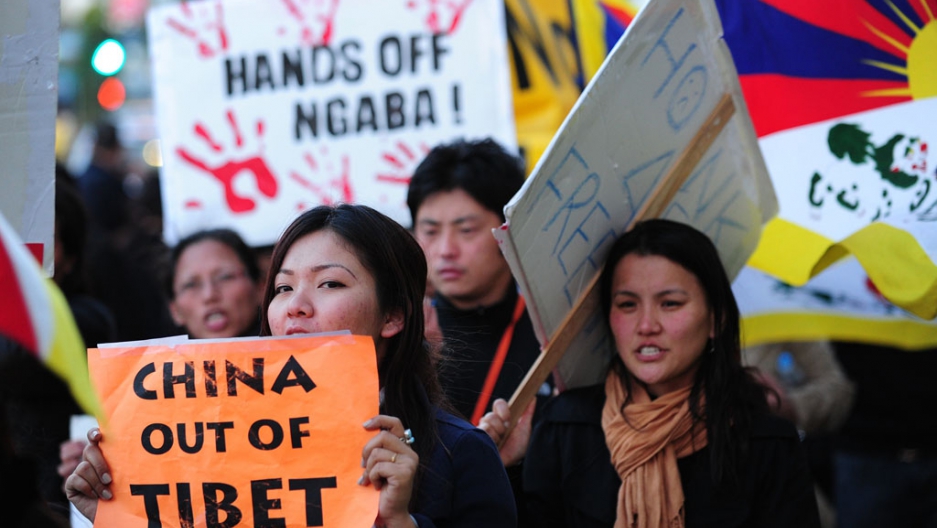 BEIJING, China — When China has trouble in Tibet, the world notices.

China’s heir apparent visited the United States last week and his country’s handling of dissent and self-immolations was once again in the spotlight.

Pro-Tibet protesters followed Chinese Vice President Xi Jinping around the country, sparring in some US cities with protesters who support China’s handling of the region. When America’s leaders brought up human rights in their talks with Xi, who is expected to become China’s next president in months to come, Tibet was on the table.

But the international outcry over the recent wave of self-immolations among Tibetan monks and nuns protesting China’s policies appears more subdued than global outrage toward China after the 2008 Lhasa riots.

More from GlobalPost: How the trouble started in Tibet

Then, riots in Lhasa that reportedly killed 19 people drew a heavy-handed security response from China. Pro-Tibet groups say hundreds of Tibetans were killed and scores arrested. The Lhasa protests spiraled into other Tibetan areas, and focused attention squarely on one of China’s most delicate issues just as the country prepared a huge international party — the global torch run for its first-ever Olympics.

In the four years since, China appears to have further tightened its controls on information flowing out about Tibet. Foreign journalists are seldom allowed to report inside Tibet proper and the larger region is mostly off-limits thanks to police patrols and checkpoints. The limits have worked to squelch news coverage, and perhaps focus less attention on the issue.

In any case, Barry Sautman, a Tibet expert at the Hong Kong University of Science and Technology, said China is fighting an uphill public relations battle when monks are setting themselves on fire.

“It’s not unreasonable to think people have hit upon this issue as a way to keep Tibet in the limelight,” Sautman said of the self-immolations.

“Even if journalists were to visit these areas freely, for the most part they already come with the assumption that acts like this must be the result of political complaints,” he added.

While Tibet still draws a strong response from outside China, the country’s leaders likely care far more about the reaction within the country among Chinese people. Online discussions of Tibetan unrest are censored quickly, and official media accounts are limited to basic facts and some colorful anecdotes furthering the notion that China’s ethnic minorities are happy and carefree.

Photos from GlobalPost: Tibetans in Sichuan

This week, China's nationalistic Global Times newspaper reported a festive mood in Lhasa as Tibetans prepare to celebrate their new year holiday. The article seems at odds with what’s happening inside Tibetan monasteries and communities, where news of self-immolations and the security response resounds.

Robbie Barnett, Tibet scholar at Columbia University, said China is least concerned with what outsiders think of its handling of the issue and of dissent. Westerners can easily be dismissed as exaggerating or inflating problems. The country’s leaders are less worried about international opinion on Tibet than of news coverage that might spark problems inside China.

“They’re far more worried about domestic politics,” he said. “The key issue is what Chinese people think about Tibet.” Click here for a larger version of the map.