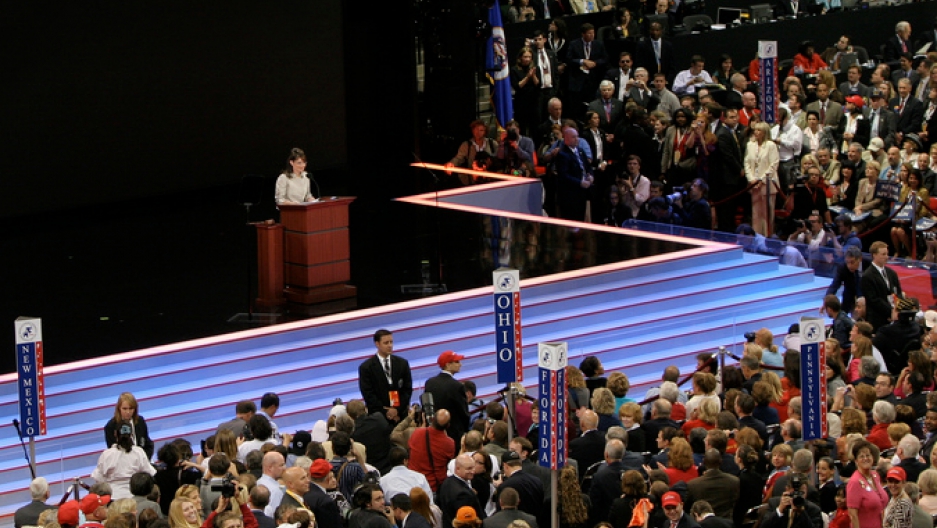 Sarah Palin speaks at the 2008 Republican National Convention. There's talk that no single candidate could have enough delegates coming into the convention to win the nomination. (Photo by twinkletoez via Wikimedia Commons.)

There's been talk among the political talking heads that if Mitt Romney and Rick Santorum split the delegates in the Arizona and Michigan primaries, and if newt Gingrich can pick up a couple of wins on Super Tuesday, that the GOP could be headed to a contested convention.

In a contested convention, no single candidate has a majority of delegates which means that deals must be cast in order to declare a candidate. In that instance, or so the logic goes, another Republican could claim the party's nomination and unite a Republican party that's somewhat unenthused and very divided by the candidates they're able to choose from today: Romney, Santorum, Gingrich and Ron Paul.

While political talking heads are beginning to admit that it's possible there could be a brokered convention — something that hasn't happened in decades, it's still not very likely.

Jonathan Bernstein, a political scientist and writer for a variety of political sites, said this hasn't happened in the modern era and is extremely unlikely to happen even this year.

"As long as we have two candidates taking delegates, you really can't get much of anything to happen. We'll know the winner before they get to Tampa," Bernstein said.

That's basically what happened between Hillary Clinton and Barack Obama in 2008. To have a contested convention, either Paul or Gingrich would have to accumulate a large number of delegates.

"The odds are that neither of them are going to get very many," Bernstein said.

But if they did, the possibility arises that another candidate, someone who wasn't on the primary ballots, could come in to break the tie.

"It would be very dangerous business to try that, but somebody could try that," Bernstein said.

There's nothing to stop that from happening, it's just never happened before. It's extremely unlikely, for example, anyone could mount a legal challenge to such a determination, Bernstein said.

Bernstein said there are a couple of nightmare scenarios for Republicans, not the least of which is that Santorum could win the popular vote while Romney wins the delegate tally. Santorum isn't even on the ballot in all the states still to be contested.

"The Republican rules are different state-by-state. There are some real advantages to having a well-organized campaign, making sure you have a full delegate slate in every state," Bernstein said. "It could be that Romney will game the system a lot better, just because he has a much more sophisticated operation."