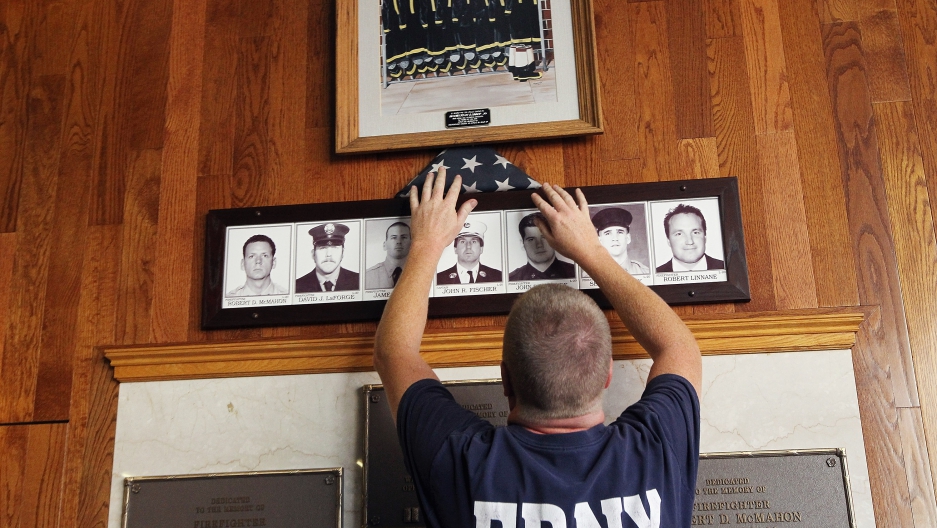 A firefighter places an American flag on a memorial display while preparing for 9/11 ceremonies at FDNY Ladder 20 Engine 13 on September 9, 2011 in New York City.
Credit: Mario Tama
Share

A South Carolina man who claimed to be a New York City firefighter and spoke publicly while wearing an FDNY dress uniform about his heroic efforts on 9/11, has admitted that he made the whole thing up.

Jordan Liflander, now of of Boiling Springs Pennsylvania, spoke at a 9/11 ceremony last year in Spartanburg.

According to NBC, he said he retired as a captain of Ladder Company 133 and that he attended 47 funerals in three weeks for those who perished in the attacks.

However, Frank Dwyer with the FDNY media office told the network that no one named Jordan Liflander had ever served with the department.

Liflander, interviewed by News Channel 7, said: "It was just ego," Liflander explained. "Silliness. Trying to fit in and be one of the guys. It just spiraled out of control and became a lie I had to live."

Liflander had said during the Spartanburg service that what he remembered most from the events after the terror attacks was attending "47 funerals in three weeks for brothers who died that day," 7 reported.

Asked if he had spoken at other events, he confessed to two more appearances — in North Carolina and another in Spartanburg.

According to 7, Liflander also admitted to pleading guilty to arson in 1978, saying he had set a dumpster on fire while drunk.

He said the lie had started at Cherokee Springs Fire Department where he was a paid volunteer since January of last year, though he'd since resigned amid the controversy.

He apologized to all FDNY firefighters, especially Ladder 133 and to anyone in the community who had been hurt by his lie.

Fox News cited the statement as saying that that Liflander had been recommended by The Knights of Inferno Motorcycle Club for use as a guest speaker and because he was a local.

The 7 network, meantime, quoted Wright as saying: "We didn't check his background because we didn't see a need to. We didn't have to fly him in, he lived here and someone with the fire department knew his story."

He said the county would take steps in the future to vet prospective speakers.

"Please do not cloud the intent or purpose of this Memorial Service with this individuals misconduct," he added. "We honored all the people touched by this horrific event and will continue to do so in the future."