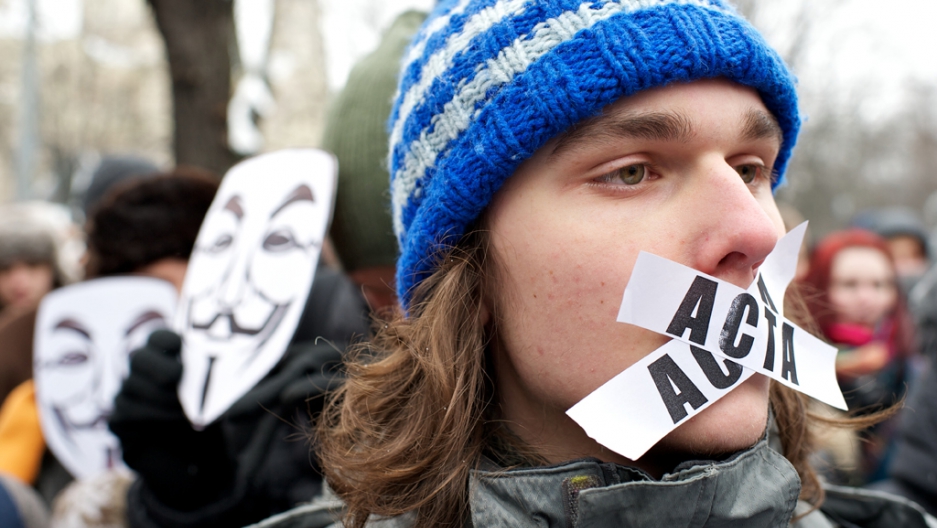 A man protests on February 13, 2012 against the controversial Anti-Counterfeiting Trade Agreement (ACTA) in Riga. ACTA was negotiated by the European Union, Australia, Japan, Canada, Mexico, Morocco, New Zealand, South Korea, Switzerland, Singapore and the United States, and is headed to Europe's highest court for a legal opinion. ACTA aims to beef up international standards for intellectual property protection, for example by doing more to fight counterfeit goods. But it is its role on the internet that has fuelled anger online and on the streets.
Credit: Ilmars Znotins
Share

The European Union is sending the Anti-Counterfeiting Trade Agreement, known as ACTA, to Europe's highest court for a decision, the Associated Press reported.

EU Trade Commissioner Karel De Gucht said Wednesday that an opinion from the European Court of Justice (ECJ) "would clear away the fog of misinformation" surrounding ACTA, the AP reported.

"We are planning to ask Europe's highest court to assess ACTA's compatibility with the EU's fundamental rights and freedoms, such as freedom of expression and information or that of protection," De Gucht told reporters at a press conference, Reuters reported.

ACTA is legislation which aims to strengthen international copyright protection on the internet. However, protesters across the EU and around the world have focused on clauses in the agreement which they believe threaten freedom of expression online.

"No legal debate can fix ACTA or give it a legitimacy that by design it cannot have," said Jeremie Zimmermann, co-founder of the Internet advocacy group La Quadrature du Net, according to the Huffington Post.

Anonymous, a hacktivist group which has been waging war online against legislation such as SOPA, PIPA and ACTA, took responsibility for a new series of hacks against the US Federal Trade Commission and consumer rights websites last week, the AP reported. The sites were replaced with a violent German-language video satirizing ACTA.

"For me, blocking the Internet is never an option," Viviane Reding, the EU commissioner for justice, fundamental rights and citizenship, said in a statement, BBC reported. "We need to find new, more modern and more effective ways in Europe to protect artistic creations that take account of technological developments and the freedoms of the internet."

While countries can individually ratify the terms of the agreement, EU backing is considered essential to the proposal's aim of implementing consistent standards for copyright enforcement online, BBC News reported.

In addition to having the signatures of 22 European countries, ACTA has also been signed by Japan, the United States, and Canada. The legislation is set to be debated by the European Parliament in June.