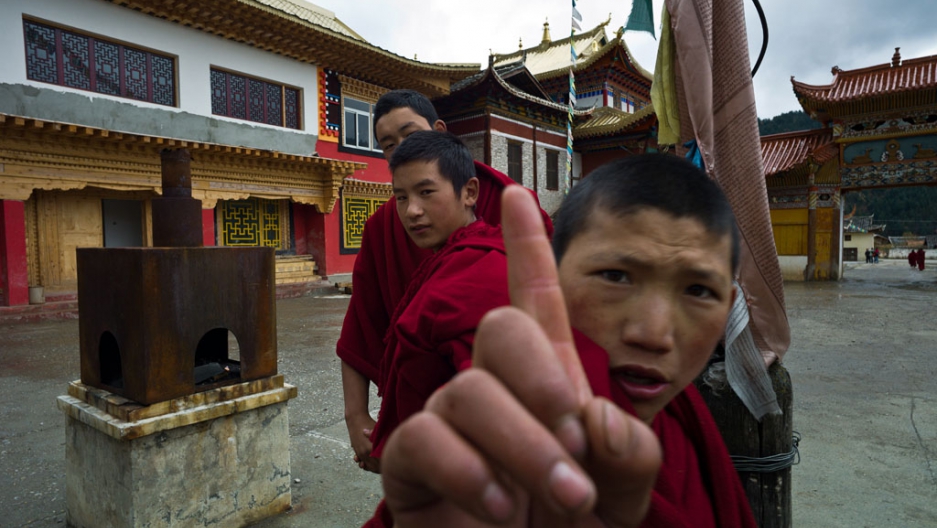 The young Tibetan man aimed his middle and forefingers at his temple, cocking his thumb like a trigger.

His message couldn’t have been clearer: Foreign journalists showing up in a heavily monitored Tibetan monastery, trying to talk about unrest and protests could get lamas arrested, or even worse.

The monks who gathered around echoed his words, though none were quite as dramatic. They have many things in their hearts, one explained, but they have no power to express them, no power to talk about what is happening. At any time, police might show up and take people away just for talking.

Photos from GlobalPost: Tibetans in Sichuan

We left that monastery quickly and frantically, ducking into doorways and alleys to escape prying eyes in patrolling police cars. Protecting the people there means not even disclosing the monastery's name.

Merely traveling in Tibet is risky. Back on the snowy and narrow highway, after attempting to visit several other monasteries, we hid under scarves and heavy coats at every toll booth and passing police car.

The Chinese government has made it almost impossible to find out exactly what’s happening in the ethnically Tibetan regions.

China has long required foreign journalists to get permission before entering the Tibet Autonomous Region, and rarely grants it for anything but government-run trips. Those boundaries have been informally expanded to include the vast highlands of Sichuan, Qinghai and Gansu provinces where Tibetans live — referred to collectively as Greater Tibet.

Click here for a larger version of the map.

Since protests erupted in recent months, foreign journalists have been repeatedly blocked from working in Tibetan areas across the plateau. Chinese drivers and assistants have been subjected to lengthy questioning and threats, while Tibetans are under heavy pressure not to talk. In at least one case, a monk was detained and charged after speaking with human-rights groups and journalists.

The BBC reported that its correspondent was pressured to sign a document stating he wouldn’t try to enter Tibetan areas in Sichuan province, and that his visa would be revoked within two days if he tried.

“Correspondents attempting to travel to the region in question have faced major obstacles, including detention by the police and roadblocks at which they have been stopped and turned back by officials who have then forcibly escorted them back to Chengdu, [a Chinese city outside the Tibetan region]. 'Bad roads' and 'weather' are being used as excuses for denying correspondents entry to the area,” the Foreign Correspondents’ Club of China said in a Feb. 2 email to members.

“One team reported that their car was suspiciously rammed by another vehicle. Reporters have been followed, questioned for hours, asked to write confessions and had their material confiscated,” the FCCC added.

In three days and many hundred miles of traversing the northern side of the Tibetan plateau, we weren't detained or turned back. That was likely only due to good luck and lots of hiding.

But even when roadblocks and threats don’t keep journalists out, those inside the region are often too spooked to speak openly about what is happening.

The media lockdown has given China great control over the flow of information about what’s happening in Tibet. State-run newspapers have published lengthy and detailed accounts of dangerous Tibetan rioters. One even appeared under the questionable headline: “Monks Run Amok.”

A few foreign journalists have now managed in recent days to sneak into the Tibetan areas of Sichuan, Qinghai and elsewhere. As we found at the monastery mentioned above, the real danger falls squarely on the shoulders of those who talk to us.

Back to the Tibetans in Turmoil series landing page