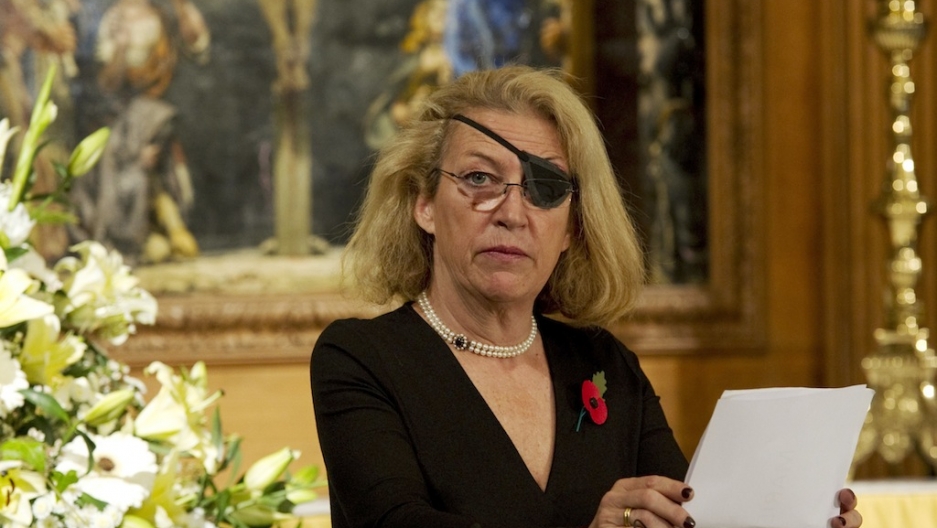 LONDON - NOVEMBER 10: Marie Colvin of The Sunday Times, gives the address during a service at St. Bride's Church November 10, 2010 in London, England. The service commemorated journalists, cameramen and support staff who have fallen in the war zones and conflicts of the past decade. (Photo by Arthur Edwards - WPA Pool/Getty Images)
Credit: WPA Pool
Share

CAIRO, Egypt -- Another tragic, bloody week in Homs, Syria has stolen the lives of two foreign journalists and a local citizen journalist known for his live webcasts of the ongoing war in the embattled city.

Reports say on Wednesday morning, a government-fired volley of mortars slammed into a house hosting several foreign journalists who traveled there to cover an intensifying crackdown by regime security forces in Homs, now in the eleventh month of its popular revolt.

Marie Colvin, an American-born veteran war correspondent for The Sunday Times (UK), and French photographer Remi Ochlik, who just won the World Press Photo award in the General News category, were both killed by a rocket as they tried to flee the assault, Reuters reports.

Because the government of Syrian President, Bashar Al Assad, restricts access for foreign media, many international reporters have resorted to crossing into the country illegally in order to cover the bloodshed, abandoning normal procedures and safeguards that in theory would guarantee them protection as members of the press.

Last week, well-known New York Times reporter, Anthony Shadid, died of a fatal asthma attack while reporting in Syria’s north. He did not have access to proper medical care.

Syrian journalists operate with zero security, and have been targeted with vigor by regime forces for assassination and imprisonment, activists there say.

On Tuesday, Rami Ahmad Al Sayeed, a citizen broadcaster who streamed live feeds of government attacks on Homs, aired widely by outlets like the BBC and Al Jazeera, was killed by the Syrian army, the social media site, Bambuser, says.

The Committee to Protect Journalists, an independent press freedom advocacy group, said in a 2011 special report that journalists are dying at high rates while covering protests in the Arab world.

In 2010, Marie Colvin, who lost an eye in a grenade attack in Sri Lanka and covered wars from Kosovo to Chechnya and now Syria, spoke at length about the risks and rewards of working as a journalist in conflict zones.

From Marie Colvin in the Guardian:

"Covering a war means going to places torn by chaos, destruction, and death... and trying to bear witness. It means trying to find the truth in a sandstorm of propaganda when armies, tribes or terrorists clash. And yes, it means taking risks, not just for yourself but often for the people who work closely with you. […]

Craters. Burned houses. Mutilated bodies. Women weeping for children and husbands. Men for their wives, mothers children. Our mission is to report these horrors of war with accuracy and without prejudice. We always have to ask ourselves whether the level of risk is worth the story. What is bravery, and what is bravado?"

Here is her last report filed from Homs.