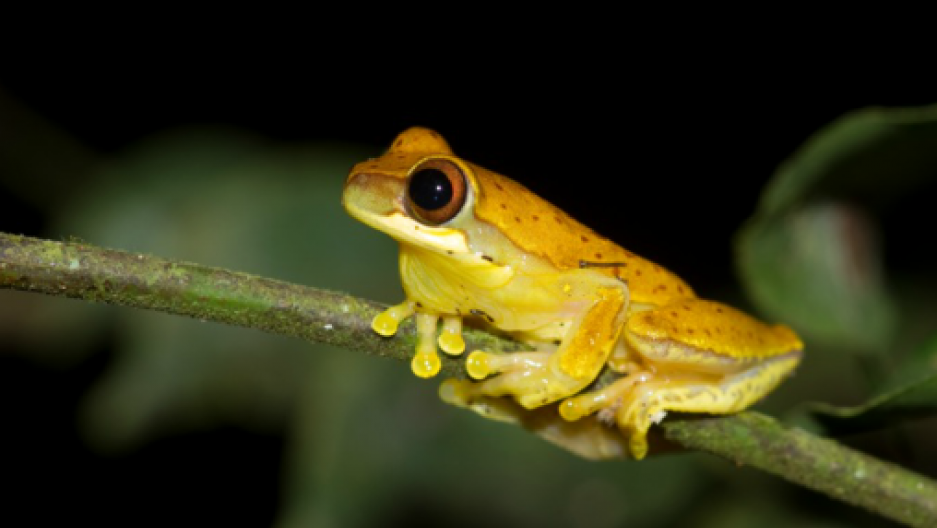 This hourglass frog is among the many species that scientists are trying to rescue as a disease spreads around the world. (Photo by Brian Gratwicke.)

In the middle of the night, in the middle of a rainforest in Central Panama, biologist Brian Gratwicke slogs through a stream with a group of researchers looking for little green blobs sitting on a green leaf.

“Anything that makes the leaf hang unusually,” Gratwicke said.

A colleague spots a set of tiny eyes glimmering in the beam of a flashlight. But it’s a false alarm — probably just a spider, and spiders are not the scientists’ quarry. Nor are the venomous snakes or the very large lizard the team catches sight of. No, the little green blobs Gratwicke and his colleagues are looking for are frogs, and after 90 minutes in the jungle, they have yet to find a single one.

It might just be bad luck, but probably not. Frogs around the world are in trouble. Scientists estimate that over the last 30 years more than 100 species have gone extinct, and that more than a third of the remaining amphibian species are at risk of extinction.

Habitat loss and climate change are both playing a role in the disappearances, but another big reason is a virulent fungal disease that likely originated in Africa and has been spreading around the globe for decades — Amphibian Batrachochytrium dendrobatidis, or chytrid for short.

Gratwicke, a researcher with the Smithsonian’s National Zoo in Washington, D.C., said for the amphibian world it’s an epidemic “that could spread from dogs to cats to cows to bats, and cause the extinction of half of those species. That’s what we’re looking at with this disease.”

In parts of Central America chytrid is spreading by about 20 miles a year. That’s why biologists here in Panama are racing to collect frogs and other amphibians ahead of the fungus.

Finally, the scientists have success — a glass frog guarding a gelatinous pile of eggs, with tiny tadpoles wiggling inside. The glass frog’s skin is transparent, and right above its stomach, you can see its tiny white heart beating.

It’s a stunning sight, but that’s it for this expedition — just a single frog.

The researchers have had better luck elsewhere, and when they do find frogs, they pack them into plastic bags and medevac them out of the forest like injured soldiers, to tightly controlled buildings like the ones Angie Estrada works in at the Summit Zoo, in Gamboa, Panama. The buildings are basically converted shipping containers that Estrada calls “pods”—a safe, “chytrid free” population of frogs in captivity.

Each pod holds row upon row of aquariums, fog machines, and UV lights, which Estrada said are meant to reproduce the specific conditions of each species’ natural habitats.

“Some of these frogs are coming from cloudy mountain forests,” Estrada said, “so our pods need to keep up with high humidity and low temperatures. They need to have light–white lights resembling night light and day light. We also need to do UV lights (to allow them) to go through metamorphosis.”

The frogs in the pods are some of the most remarkable you’ll see anywhere. Some look like bright yellow decomposing leaves, others are black as tar and have a crown like a triceratops.

And the pods hold some of the very last of their kind.

And yet it’s a bit of a rag-tag effort, as scientists race to keep up with a disease that they say is killing frogs fast.

Edgardo Griffith, who runs the El Valle Amphibian Conservation Center in Western Panama, where the fungus swept through several years ago, said scientists there were “behind the chytrid wave.” When chytrid arrived in El Valle, Griffith said, “we didn’t even have a facility. So we had to keep frogs in hotel rooms.”

But being as exotic as they are also means there’s no rule book on how to take care of these frogs. Nobody knew exactly what some of them ate, or what they needed to mate. The researchers are learning as they go. And Griffith said they “lost a lot” of frogs along the way.

Why go to all this trouble to save a bunch of amphibians? The Smithsonian’s Brian Gratwicke said some of them may prove important to humans.

“There’s a species of frog in Australia that produces a chemical called asirin, which blocks HIV transmission to T-cells,” Gratwicke said.

And the skin of other frogs has produced compounds that kill “superbugs” in hospitals. That’s why Gratwicke believes every extinction is a lost opportunity for humans.

“The untapped resources of our amphibian biodiversity are virtually unknown,” he said.

“’To keep every cog and wheel is the first rule of intelligent tinkering,’” Gratwicke said, quoting the legendary ecologist Aldo Leopold. In this case, he said, “amphibians are more than just the cogs and wheels. They are the entire middle of the food chain. They eat all of the bugs that are then eaten by snakes and birds and other things. So we just want to make sure we look after them.”

Of course frogs can only play their vital ecological roles if they can survive in the wild. And that likely can’t happen for most of the species now being sheltered here in Panama without some kind of solution to the Chytrid problem. There is promising research in the United States, where scientists have discovered bacteria that confer immunity to the fungus for some amphibians. But so far there is no miracle cure that will work in the wild.

Meanwhile, Angie Estrada has had a breakthrough in her efforts to save at least one endangered species in her frog pod in Gamboa, where about 80 miniature black and green frogs hop around a critter keeper. Estrada said they’re a brood of Atelopus certus babies, “one of the first Atelopus born in captivity ever.”

The species is native to a sliver of Panamanian forest called the Darien. There may be 150 species of frogs there altogether, and it’s still chytrid free. But scientists estimate that the fungus will arrive there in a year or two, and that ninety percent of them will die.

Estrada hopes that some day, though, her baby frogs may be able to leave her amphibian ark and go back to their parents’ forest home.

“I know it’s crazy,” Estrada said, “but these may be the founders for repopulating these areas.”