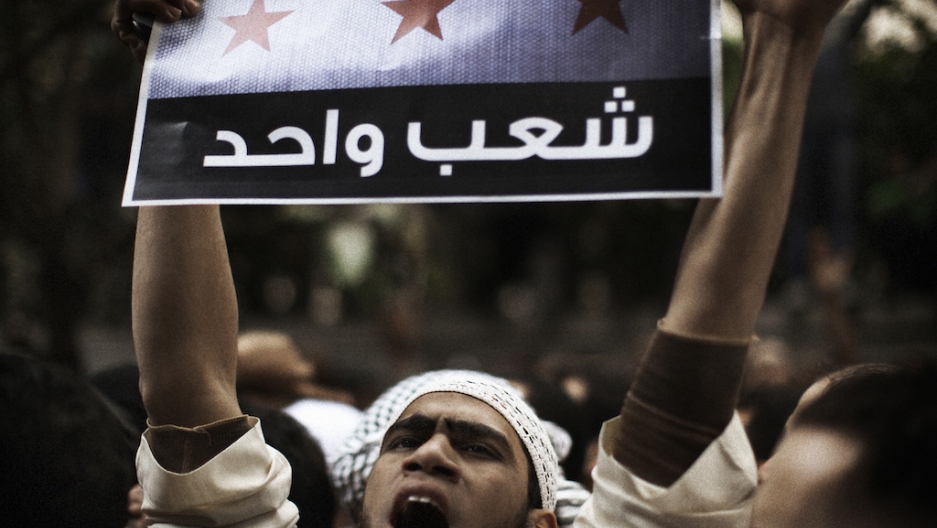 A protester holds a sign reading 'One people' during a demonstration organized by Egyptians and Syrians living in Egypt to call for the expulsion of the Syrian ambassador outside the Syrian embassy in Cairo.
Credit: MARCO LONGARI
Share

CAIRO, Egypt -– What do Egyptians think of the efforts of Syria protestors to overthrow President Bashar Al Assad?

Gallup says it has the answers, with a new US Foreign Policy Opinion Briefing released today. According to the poll, 56 percent of Egyptians say they support current calls to oust Assad in Syria.

But roughly one-third also said they "don't know" if they support those battling for regime change in Syria. Compare those figures with 79 percent who said they supported the protests to overthrow Egyptian President, Hosni Mubarak, last year.

Gallup attributes the uncertainty over Syria to fears of a security vacuum that would destabilize the region should Assad fall. While Egypt has not witnessed the same level of violence as either Syria or Libya in the year since the Arab uprisings began, many Egyptians are alarmed by rising domestic insecurity and street-level crime in the wake of the revolt.

At that time, the Syrian conflict had already grown exceptionally violent, but the current crackdown on the flashpoint city of Homs, under heavy bombardment by Assad forces, had yet to begin.

On Feb. 17, 2012, hundreds of Egyptians and Syrians demonstrated outside the Syrian embassy in Cairo, where the phones are now disconnected with rumors the ambassador has been recalled.