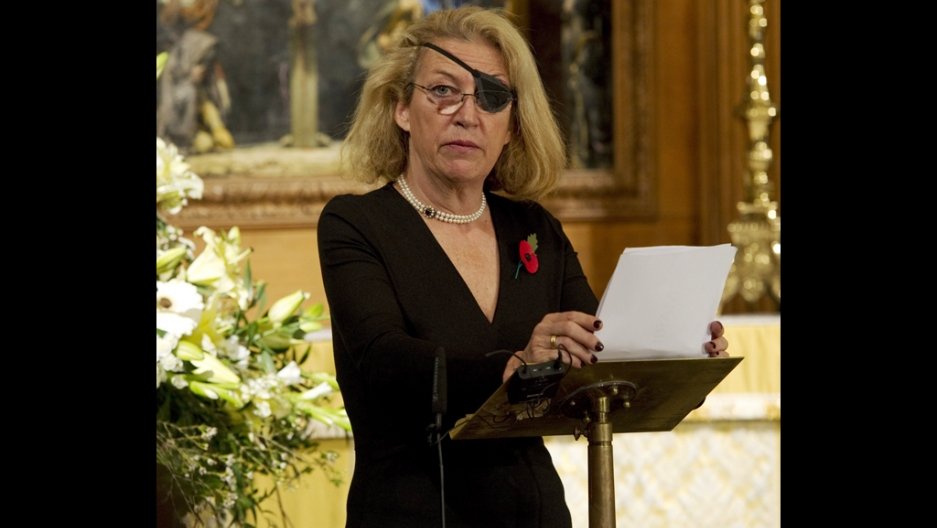 Marie Colvin, of The Sunday Times, was killed on February 22, 2012 in Syria, when the building she was in was hit by rocket fire in Homs.
Credit: WPA Pool
Share

Violence from the Arab Spring protests claimed two more lives in the press corps on Wednesday, as renowned journalist Marie Colvin and photojournalist Remi Ochlik were killed when the building they were in was hit by shells in Syria.

The Arab Spring uprisings across across the Middle East and North Africa have taken a heavy toll on journalists, with at least 15 lives being claimed in 2011, according to the Committee to Protect Journalists.

Marie Colvin (Feb. 22, 2011, Syria) - Colvin, a veteran journalist of many conflict zones who worked for The Sunday Times, was killed when the house she was in was hit by rocket fire.

Remi Ochlik (Feb. 22, 2011, Syria) - Ochlik had covered the Arab Spring uprisings in Tunisia, Egypt and Libya as a photojournalist. He was in the same building with Marie Colvin and other journalists when it was hit by shelling.

Anthony Shadid (Feb. 16, 2011, Syria) - Shadid, a renowned foreign correspondent for The New York Times, The Washington Post and others, died while reporting in Syria after suffering from an asthma attack.

Mazhar Tayyara (Feb. 4, 2011, Syria) - Tayyara was a videographer and photojournalist who was killed by shelling from government forces during an attack on the city of Homs. He sustained severe injuries and died in the hospital within hours, according to reports.

Gilles Jacquier (Jan. 11, 2011, Syria) - French television reporter Jacquier had the Syrian government’s permission to be in the country. However, he was killed while covering a pro-government rally by rocket fire.

Basil al-Sayed (Dec. 27, 2011, Syria) - Al-Sayed was a freelance videographer who died of a gunshot wound after five days in the hospital. Reports suggest Al-Sayed was shot in the head by security forces.

Ferzat Jarban (Nov. 19 or 20, 2011, Syria) - Jarban was a cameraman who was last seen being arrested while filming a demonstration on Nov. 19. His mutilated body was found the next day, with his eyes gouged out.

Wael Mikhael (Oct. 9, 2011, Egypt) - Mikhael worked for a Coptic Christian broadcaster and was shot in the head while filming clashes between the military and protesters in Cairo.

Hassan al-Wadhaf (Sept. 24, 2011, Yemen) - Al-Wadhaf sustained a serious eye injury in Sanaa on Sept. 18 while covering attacks by security forces on demonstrators. He was hospitalized, but it was later reported that he was on life-support with no chance of recovery.

Chris Hondros (April 20, 2011, Libya) - Hondros was a photographer for Getty Images, and died in Misrata after suffering serious head injuries. He was killed in the same attack as Tim Hetherington, while two colleagues suffered smaller injuries.

Tim Hetherington (April 20, 2011, Libya) - Hetherington was the Oscar-nominated co-director of the 2010 documentary “Restrepo.” He succumbed to wounds in Misrata, in the same attack that killed his colleague Chris Hondros.

Karim Fakhrawi (April 12, 2011, Bahrain) - Fakhrawi, a co-founder of Bahrain’s only independent newspaper, Al-Wasat, died in custody, a week after his arrest. Authorities said he died of kidney failure, but his body was covered in cuts and bruises according to photos and videos posted online before his burial.

Zakariya Rashid Hassan al-Ashiri (April 9, 2011, Bahrain) - Al-Ashiri, a pro-democracy blogger, died in custody, a week after he was arrested as part of a crackdown in Bahrain. The authorities claimed he died of complications from sickle cell anemia, but his body revealed significant bruises.

Anton Hammerl (April 5, 2011, Libya) - A South African freelance photographer, Hammerl was killed when government troops attacked him and three other journalists outside Brega. His death was concealed for at least six weeks after he was shot, and his family believed he was detained and still alive.

Mohammed al-Nabbous (March 19, 2011, Libya) - Al-Nabbous was killed by sniper fire during a government assault on Benghazi. He had founded a livestream channel called Libya Al-Hurra, which showed the aftermath of government attacks.

Jamal al-Sharaabi (March 18, 2011, Yemen) - A news photographer, Al-Sharaabi was among the casualties when government forces opened fire on peaceful demonstrators in Sanaa.

Ali Hassan al-Jaber (March 13, 2011, Libya) - A cameraman for Al Jazeera, Al-Jaber was traveling from Benghazi to a nearby town after covering an opposition protest when unknown fighters opened fire on the car he was in. Al-Jaber suffered from three gunshot wounds, at least one of which went through his heart.

Ahmad Mohamed Mahmoud (Feb. 4, 2011, Egypt) - The first journalist to die in clashes in Egypt, Mahmoud was shot while taking pictures of clashes between protesters and security forces from the balcony of his house near Tahrir Square in Cairo.

Lucas Mebrouk Dolega (Jan. 17, 2011, Tunisia) - One of the first deaths in connection to the Arab Spring, Dolega was a French photographer working for the European Pressphoto Agency who died after sustaining head injuries during a street protest in Tunisia.