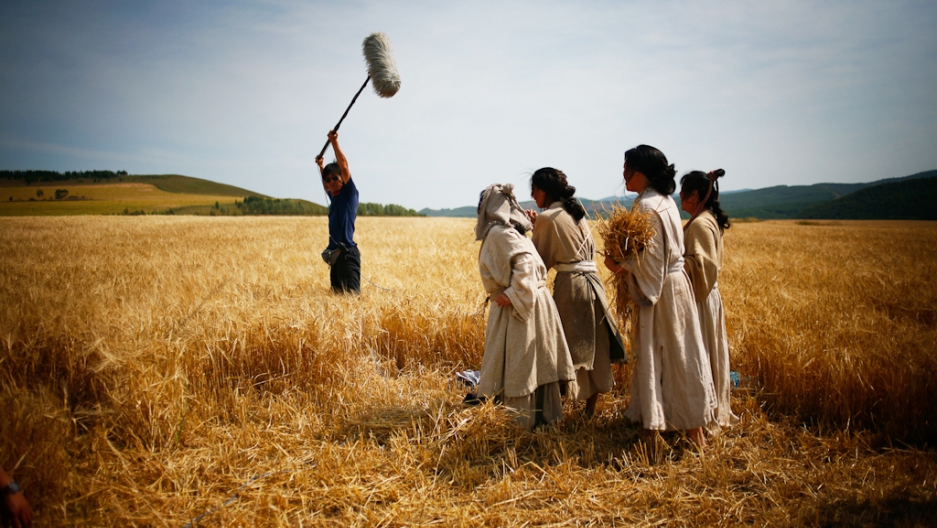 TAIPEI, Taiwan — The US box office ain't what it used to be.

In 2010, US ticket receipts accounted for just a third of global sales. That slice of the pie has been steadily shrinking since box office sales peaked in the early 2000s.

What is Hollywood to do?

In part, US filmmakers are looking further afield to new markets and revenue streams. One key destination is China, the world's fastest growing major economy and home to a thriving film industry.

Of course, it's also known for its sweeping censorship, and that raises serious issues for studios.

Experts say that making headway in China means playing by a whole new set of rules — and they don't tend to favor self-expression. To succeed in China, some US producers wind up creating films that paint a sugar-coated picture of China and then they show it to audiences all around the world.

One example is John Cusack's Hollywood-style blockbuster "2012," in which China heroically provides arks to save the rest of mankind from global flooding and imminent extermination. The film won a license from Beijing before going on to break China’s box office record.

Though using the arts to communicate a state message is a hardly a new tactic within communist countries, China appears to have found a savvy way to export its state-sanctioned message far beyond its borders.

“It really is very clever. They don’t need to censor movies themselves when Western production houses will do it for them," said Liu Lee-shin, a China film expert at Taipei’s National Taiwan University of Arts. "This is also happening in Taiwan and other Asian countries which want a piece of [China’s] arts pie.”

“If you make a movie that’s shown in Canada which Beijing considers anti-Chinese, it is very likely none of your studios’ future films or documentaries will be shown in China again,” he added.

Disney suffered severe restrictions on its interests after it released the Martin Scorsese bioepic "Kundun" in the late '90s. "Kundun" was based on the life of the Dali Lama and depicted Chinese soldiers in Tibet poorly.

China currently caps the number of foreign films in its theaters at 20 a year. But more recently, Beijing has begun courting Hollywood producers to set up shop in China, for coproductions and joint ventures with local movie houses, almost all of which have strong ties to the Party and state.

Coproductions allow Western producers to bypass the cap and access cash-rich Chinese investors, but they also mean that studios are essentially business partners with a repressive government.

“They are snapping up artists, directors, actors and production crew from everywhere and nobody wants to say no. Either the money is too good or they don’t want to offend the Party,” he said.

“Look at 'The Great Revival,' a massive production celebrating the 90th anniversary of the China Communist Party. Over 100 A-list stars turned up for a propaganda movie that only paid lunch to star in.”

Insiders say that centrally-planned China is the first to recognize Hollywood’s willingness to prioritize dollars over freedom of speech and artistic expression.

“Hollywood’s No.1 concern has always been the bottom line,” said Michael Berry, a lecturer of East Asian languages and cultural studies at University of California, Santa Barbara.

“There are people in Hollywood right now, who are running around thinking: ‘What China content can I put in here? What would work?’ Berry said. "With the massive investments on production and marketing and the stakes being so high, US producers are taking an ultra-conservative role and pumping out homogenized, stereotypical rehashes.”

Berry warned that it’s not just Hollywood that's watering down its goods to fit inside officially sanctioned China. Contemporary art, dance, theater, literature and media are also at risk, he said.

“The average consumer is not going to be aware of the level of self-censorship that is taking place. If they want to find alternative ideas on China they will have to seek them out themselves,” Berry said.

He noted that as far as Western audiences are concerned, there are three main vehicles used to project a state-sanctioned view of the modern Middle Kingdom.

First, the Chinese epic, such as "Crouching Tiger Hidden Dragon" or "Hero," which projects romanticized nostalgia of old China.

Second, films depicting tales of personal alienation and the teething pains of a society transitioning through a Westernized ideal of development. One example is "The Shower," about a busy executive who neglects his lovable-but-backward father, who runs a traditional bathhouse.

The third is the blockbuster featuring a heroic China, such as Cusack's "2012."

MGM's 2010 remake of "Red Dawn" was one of the few recent movies to pit China as a foil to Western interests. However, after China's state-run press ran editorials slamming the film, China's role was replaced by North Korea, marking the first time an entire group of people had been changed in post production.

“Beijing is in charge of the entire process. If you want to play the game you have to play by their rules. And they control the rules when it comes to scripts, distribution, the licences, production and partnerships,” said an American producer who has worked in China and asked to remain anonymous so as not to jeopardize future work.

“It's a type of reverse McCarthyism. But it’s their ball, so you play by their rules or go home.”