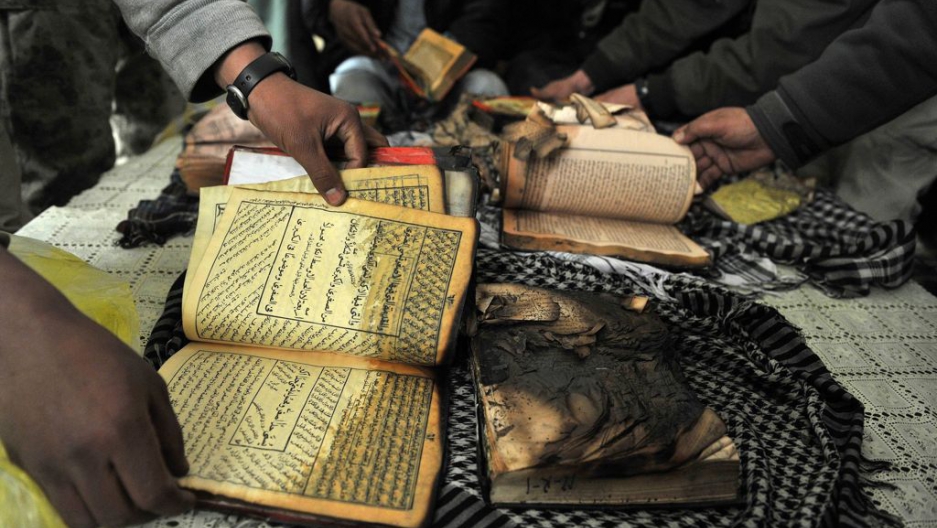 Demonstrators show copies of the Koran allegedly set alight by US soldiers serving with NATO forces in Afghanistan, during a protest at the gate of Bagram airbase on Feb. 21, 2012.
Credit: SHAH MARAI
Share

The head of NATO forces in Afghanistan, General John R. Allen, has apologized over reports that soldiers "improperly disposed" of copies of the Quran.

According to the BBC, at least a thousand Afghans protested outside Bagram Airbase outside Kabul this morning, where NATO troops were accused of burning the holy book.

More from GlobalPost: Quran burning - fuel on the fire in Afghanistan

In a statement, Gen. Allen said he had ordered an investigation into a report that International Security Assistance Force (ISAF) personnel there "improperly disposed of a large number of Islamic religious materials, which included Qurans."

Several Qurans were put out with the airbase trash on Monday night and taken to a pit to be incinerated, where Afghan employees noticed them, the head of the provincial council, Ahmad Zaki Zahed, told the Associated Press.

Allen assured that the force's commanders "immediately intervened and stopped" the disposal, and promised action would be taken to ensure that it never happens again.

"I assure you, I promise you: this was not intentional in any way," he said. "I offer my sincere apologies for any offense this may have caused, to the president of Afghanistan, the government of the Islamic Republic of Afghanistan, and most importantly, to the noble people of Afghanistan."

Agence France Presse described the statement – which was shown repeatedly on Afghan television – as "remarkably candid." It appears to be an attempt at damage control after an incident that has the potential to cause grave offense to Muslims.

Angry crowds outside Bagram were heard to chant "Death to America" and "We don't want them anymore," the New York Times reported. Protesters threw slingshots and petrol bombs, according to an AFP photographer, who said airbase guards fired back rubber bullets.

Such incidents stand to do "immeasurable harm" to relations between the Afghanistan and the US-led forces there, according to GlobalPost's correspondent Jean MacKenzie, who described the shock and anger in Kabul when US pastor Terry Jones threatened to burn a Quran on Sept. 11, 2010. The insult sparked riots that led to the killing of at least seven United Nations workers.

And in October 2009, rumors that US soldiers had burned copies of the Quran in a province near Kabul sparked violent riots in Afghanistan, leaving several people dead and injured.