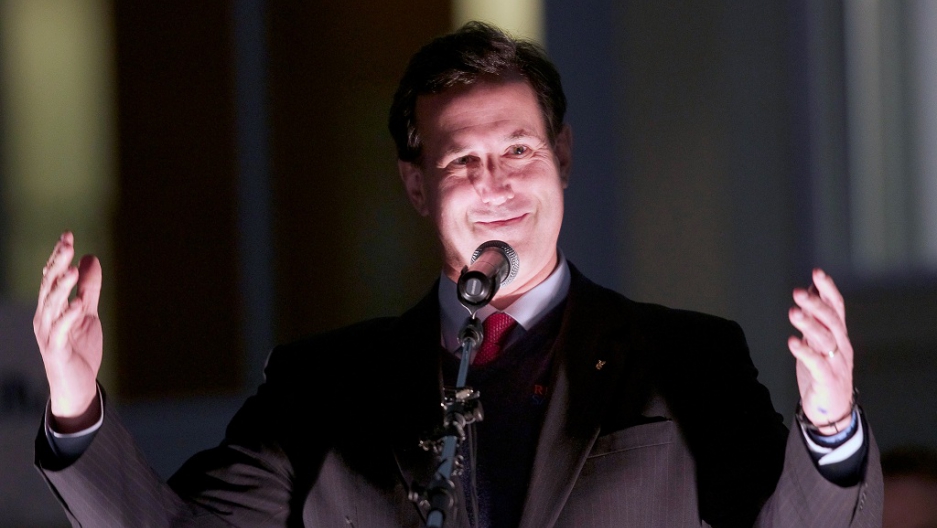 Rick Santorum has set himself out to become the Republican Party’s culture war candidate, decrying President Barack Obama’s plan to require insurers to provide free birth control, even if the insured is employed by a religious institution that is opposed to the use of contraceptives.

The comments earned Santorum “scumbag” status across the liberal internet, a reference to the “Scumbag Steve” meme that depicts a young man with a grimy expression wearing an obnoxious looking sideways fitted cap.

Reserved for the most hated of public figures, notable internet scumbags include former Egyptian President Hosni Mubarak and Pope Benedict XVI. One is declared a scumbag by placing Steve’s hat on the subject’s head flanked by text highlighting the subject’s observed hypocrisy on the top and bottom of the photo.

Such memes, usually born from the primordial, digital chaos of 4chan's /b/, may be thought of by Republican strategists as the benign creation of a few neckbeards. However, as the US Congress learned last January, the political will of the internet can be brought to bear on the politicians and legislation that it loathes.

More from GlobalPost: SOPA: Has the internet won?

The newfound political force of the internet has yet to be completely understood by all the politicians up for reelection. But the internet’s opinion of America’s presidential candidates is spread across every corner of the digital world.

So, who is the internet voting for in November?

By anyone’s reckoning the internet’s political views lean more toward anarchy than they do toward good old-fashioned family values. Juggernauts of the internet like 4chan, Anonymous’ home turf, often claim that voting is pointless and that the US is run by what is essentially a corporate oligarchy, much like the Occupy movement that Anonymous has aligned itself with.

The internet’s distaste for politicians in general is even obvious to the lay-user on YouTube, where nearly all videos uploaded in support for Republican presidential candidates almost instantly earn a red light saber. In the comment section of YouTube videos, users can like or dislike the video. The results of these votes are displayed visually in a bar where the red section represents dislikes and the green section represents likes.

When the internet hates someone, their videos earn a comment bar that looks like a red light saber with a green handle.

But in spite of the internet’s love of chaos and anarchy, one presidential candidate stands out among all others in the battle for the Republican Party's 2012 presidential nomination.

Loved for his libertarian leanings on social issues and a non-interventionist foreign policy, Ron Paul will likely be the winner of the internet’s nomination. While those that believe voting serves no purpose still far outnumber Ron Paul's internet army, the Texas congressmen has more support on the internet than any other Republican presidential hopeful.

More from GlobalPost: Did the anti-SOPA internet defeat Paul Ryan?

Whether it’s on 4chan, 9GAG, Reddit, or even Facebook (still not a part of the real internet), Ron Paul is everywhere. Threads for casual drug users are full of Ron Paul’s positive views on the legalization of marijuana, traditional left wingers praise his desire to lessen US military presence around the globe, and others just want to stop paying income tax.

Ron Paul's detractors often cite his fundamentalist religious beliefs and his skepticism regarding evolution in attempts to lure the largely anti-theist internet away from the congressman. Others, as always, resort to trolling in frustration, but all attempts to dethrone Ron Paul as the internet’s choice for 2012 have failed.

Lest we forget the short reign of Boxxy as queen, the internet is also home to several fallen monarchs. Unlike this young, hyperactive anime fan declared ruler by 4chan in 2009, sparking an internet civil war, Ron Paul has staying power and his internet support in 2008 seems to have carried through 2012. If his return after a four year hiatus is any indication, Ron Paul will be appearing all over the internet for years to come. Whether or not he wins the Republican Party’s nomination, he reigns as president of the internet.