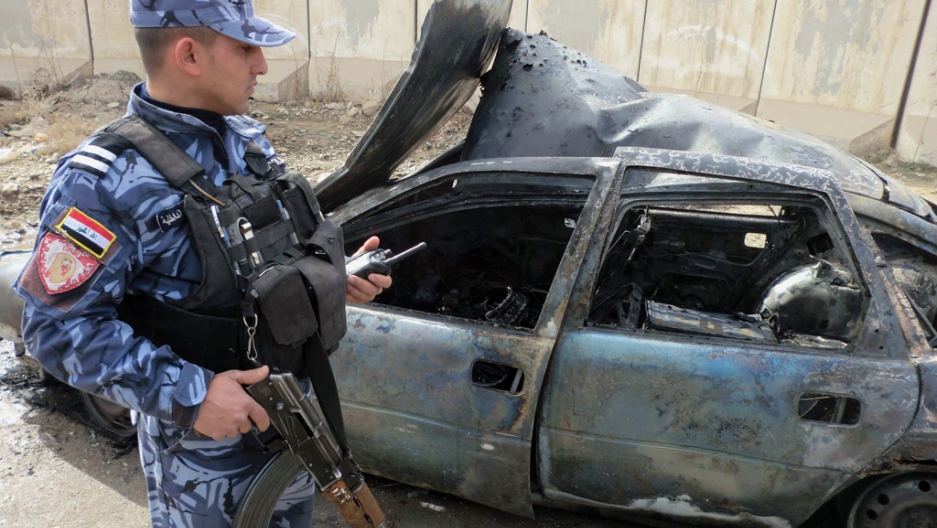 An Iraqi soldier stands close to a destroyed vehicle following a road side bomb on February 13, 2012. A car bomb near a police academy killed 20 police recruits in Baghdad on February 19, 2012.
Credit: MARWAN IBRAHIM
Share

A suicide bomber killed 20 recruits in an explosion near the police academy in Baghdad on Sunday, according to the Associated Press.

Authorities said the bomber was waiting outside the fortified academy and drove toward the crowd of police recruits as they exited the security barriers around 1 p.m., detonating his car bomb.

Haider Mohammed, an employee of a nearby business told the AP, “We heard a big explosion and the windows of the room shattered.” He said everyone knew the times that recruits entered and left the academy.

"I can see body parts scattered on the ground and boots and berets covered with blood. Many cars were set ablaze," a policeman who worked at the academy told Reuters.

Police said 14 of those killed were cadets and five of the people killed were police. No one has claimed responsibility for the attacks yet, but officials believe Al Qaeda might be behind the attacks, as they were responsible for similar attacks in the past, said the BBC.

The AP said Iraq’s police force is seen the most vulnerable of Iraq’s security forces, which makes it a common target for bombings and shootings. The last attack of this magnitude was in Oct. 2011, when 25 people were killed in a string of bombings.

The New York Times had slightly lower figures from an official at the Interior Ministry, stating that the attack left 15 dead and 21 wounded.

According to data compiled by the United Nations, 500 people were killed in January, a higher death count than any month in 2011, said The Times. February had only seen 86 deaths so far, making it one of the calmest months in Iraq since 2003.

More on GlobalPost: Iraq executes scores of prisoners in first 40 days of 2012