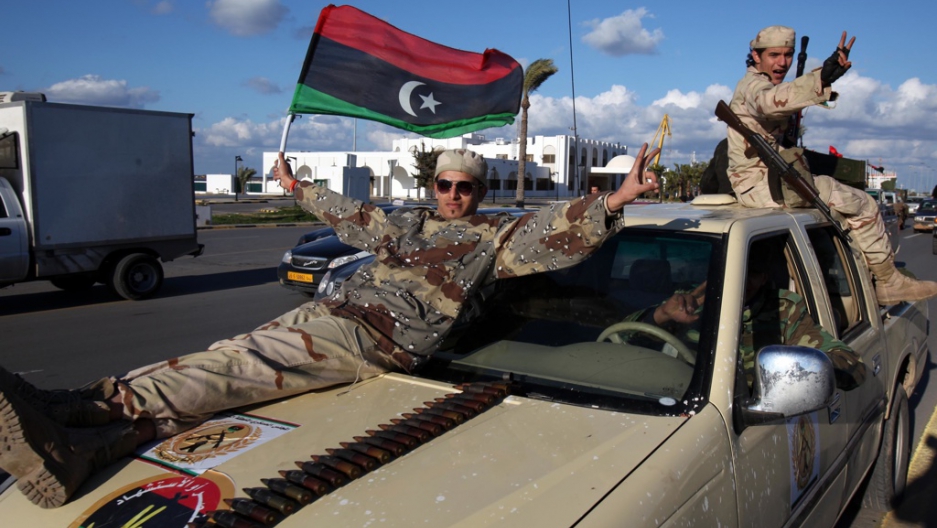 They have been hailed as heroes, freedom fighters, an underdog battling a malicious army, and vilified as vengeful, racist vigilantes.

While officials from the new Ministry of Defense say these ex-rebels now play a crucial role in maintaining Libya’s security, others fear they are contributing more to its insecurity, especially as they battle among themselves for power.

“Gaddafi was a disease, really,” said former rebel fighter Lutfy Alamin as he explained the root cause of Libya’s ongoing problems. “He made sure everyone knew nothing. Now he’s finished, and we have all this freedom but we don’t know how to deal with it. We don’t know about democracy, and justice and elections. We’ve never had the life like this. We only know the hammer of Gaddafi.”

GlobalPost In-Depth Series: Libya: The rebels after the rebellion

Justice and law enforcement is now largely in the hands of these civilian revolutionaries. They are not trained nor are they paid for their services. They are in general uninformed about citizens' rights, humanitarian law or any code of ethics or accepted operating procedure for suppressing violence.

For most, their only knowledge of justice and law enforcement comes from life under a brutal regime.

After eight months of killing, anger, post-traumatic stress and the desire to avenge the deaths of loved ones and comrades runs high.

Alamin, who left his battalion shortly after the revolution’s end, said that without a foundation to build on, it will take time for Libya’s law enforcement to develop into international standards. In the mean time, there will always be those who take advantage of the situation.

“Now we have two kinds of rebels,” he said, explaining that many who fought have put down their weapons, while young gangs who never joined the frontlines, walk the streets with guns, calling themselves rebels. “Some people were bad guys before the war, and now they see their chance.”

Last month, for instance, two fighters were killed and 36 injured in clashes between militias from Gharyan and Asbi'a. The next week, rioters broke into government offices in Tripoli, throwing stones and hand grenades. A day later, three rebels were killed and five injured from another clash in Tripoli.

More from GlobalPost: Libya's rebels: Then and now (PHOTOS)

On Jan. 23, fighting between militia groups in Bani Walid, Bengahzi and Tripoli left at least 10 dead. On Feb. 7, seven people were shot dead in a refugee camp on the outskirts of the capital, reportedly shot by militia groups from Misrata who were called in to control a protest that had turned violent.

Mohammed Abdullah Benrusali is a commander of Misrata's Halbous battalion, whose 3,000 members make it the largest militia in Libya. His battalion protects the Eastern boundary of Misrata city.

“When we believe the national army has been formed, security is sound and Misrata is safe, we will disband,” he said of Misrata’s 278 militia groups and 36,000 registered rebel fighters.

When asked how much weaponry and ammunition these battalions have at their disposal, Benruslai replied, “Calculate how much Gaddafi had before his downfall. That is your number. Everything is with us now.”

Benruslai said that unlike in Tripoli, security threats in Misrata come from outside the city. He believes Tripoli’s diversity is the root of its problems.

“Tripoli is a collection of people, and everyone wants to control it,” he said of the capital, which is home to militia groups from Misrata, Benghazi and the Nufusa Mountains, as well as several other armed groups. “In Misrata you do not see the same problems. We fought as one hand. Tripoli flew two flags until the rebels entered. They are still not sure who they support.”

The continuing presence of militia groups from outside of Tripoli has been an issue of much debate. Militia groups cannot stay in the capital without government permission. And although no heavy weapons can be taken through the city’s numerous checkpoints without documents from a government department, government departments are not always in agreement. In December, local authorities ordered all external militia groups, most of which were there by order of the interim government, to leave Tripoli. Although many returned to their home cities, the problems have not subsided.

From Misrata, eight groups remain in Tripoli. Ibrahim Betamal, head of Misrata’s Military Council, said these groups act on orders from the Ministry of Defense and will remain until the capital is secure. They support police in keeping internal security and will act on behalf of the military until these institutions are properly established, he said.

Their duties include the arrest of those charged with war crimes. They are called to investigate reports of violence, property damage and street clashes. They also man checkpoints and provide security at key events. But Libyan officials said the roles these militia groups fill are minimal, and as the new government becomes more organized, these roles are dwindling.

Abdul Hassan, who now heads a department for the collection of war crime suspects, a role formerly filled by militias, said many of these groups have been left with nothing.

“When they returned from the fight, many had expected there would be some kind of program for them, but until now the government has done nothing,” Hassan said. “Even those released from the prisons, there is no psychological help for them. Where do they go? What do they do?”

Khalifa Zawawi, head of Misrata’s local council, said plans are underway for the development of a new ministry to handle programs for ex-fighters. This would include a department to assist with work and study abroad and psychological counseling, he said.

To date, despite numerous promises, the only financial assistance paid to fighters was about $350 in November. Eventually these groups will be invited to join the police and military where a structured payment plan will be put into place, Ezwawi said.

In the meantime, Benrusali said the Halbous battalion survives on donations of money and goods from a grateful public who value the protection they provide. Other fighters have returned to the regular jobs but remain listed and on call if trouble breaks out.

Alamin happily turned over his weapons and left his battalion in October. He said he is ready to return to the fight if his country needs him again, but in his mind Libya's fight is over, and the current insecurity will not last long.

“I think what is happening now is normal after war. After any war there is an adjustment period. The war took a long time. Getting back to normal life will take a long time. Peace does not come instantly,” he said.

Categories:
Conflict & JusticeConflictPoliticsLibya: From civilian to soldier and back
Tagged:
Middle East