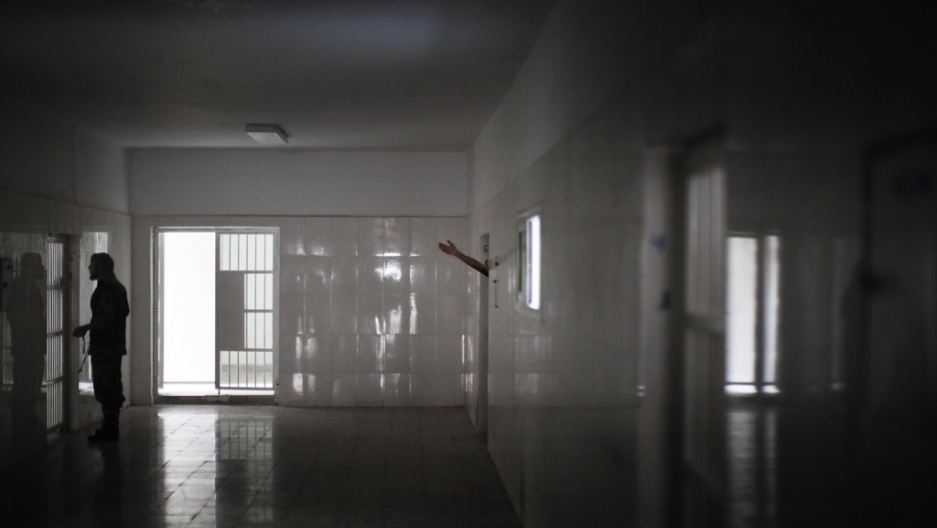 An inmate of the infamous Djeida prison gestures towards a warden in Tripoli on Oct. 11, 2011. Some 1,400 inmates are detained in this facility, among them former regime ministers, loyalist fighters, ordinary criminals and foreign immigrants.
Credit: Marco Longari
Share

MISRATA, Libya — In the beginning, there was no place to keep the imprisoned loyalists.

“It was easier to kill them. This is how people thought,” said Majid Alfituri, who was among the first to take up arms against the regime of Muammar Gaddafi.

Alfituri, however, couldn’t bear to stand by and watch. He has now become one of a few who are fighting for the fair treatment of former Gaddafi loyalists being held in the country’s disparate, and sometimes makeshift, jails.

“In March, we turned one of the schools into a prison. We tried to save as many as we could, but sometimes it was impossible … Eventually I was accused of being with them [soldiers loyal to Gaddafi] because I was saving them.”

GlobalPost In-Depth Series: Libya: The rebels after the rebellion

After six weeks, Alfituri fled from his role in the prison, which was home primarily to captured Gaddafi troops. Due to his efforts to stop the torture and execution of those captured by rebels, Alfituri said he was shot at and his home ransacked. But he continues to speak out against the treatment of Libya’s prisoners of war.

Since the outset of the revolution, reports of atrocities committed by both sides have been frequent.

While Gaddafi troops, now in detention, say they were often ordered to torture and execute prisoners and attack civilians. Revenge and mob justice played a major role in the treatment of prisoners on the rebel side.

Alfituri said these civilians often reflected the instant judgments of the brutal regime under which they had grown up.

Small, unregulated prisons still exist under the control of some militia groups. Others hold new prisoners for interrogation before turning them over to government facilities. Among the registered prisons, there is no central control. Some are run by local councils, others by the Ministry of Defense. No records are kept of just how many prisoners are now in detention.

The situation, however, appears to be slowly improving.

On a visit to one of Misrata’s two main prison facilities this week, around 50 prisoners appeared to be at ease in a crowded but comfortable room. Some rested on rolled up mattresses. There were no obvious signs of abuse or fear on the faces of the inmates. The chatter between guards and prisoners seemed casual and pleasant.

When questioned privately, the majority spoke of ill treatment and beatings at the time of their capture, but none reported either verbal or physical abuse within the military facility.

More from GlobalPost: Libya's rebels: Then and now (PHOTOS)

“In war, when you are captured in the field, anger takes over. As a military man I don’t care about this. It happened on both sides,” said Col. Mansor Daw, who was head of internal security for the Gaddafi regime. He was captured fleeing Sirte with the former dictator. He is now a prisoner in Misrata’s military detention center, where he and others said they had been treated well and were not aware of any instance of abuse within the facility.

Alfituri said that although the situation has improved in some prisons, the torture both to gain information and as punishment remains frequent.

“This mentality was reinforced by Gaddafi,” he said. “Under Gaddafi it was a jungle where the strong ate the weak. But now it’s worse than a jungle. There is no law, no justice, no control.”

Human-rights groups agree that inside regulated prisons, there appears to be little or no abuse. It is the unregistered prisoners held outside of these facilities and the external interrogation centers that are of international humanitarian concern.

On Jan. 26, Doctors without Borders suspended its operations within Misrata’s detention centers in protest of the torture of inmates.

Claudia Evers, coordinator of the group's work in Misrata, said that between August and December last year they documented 115 cases of torture. All were reported to authorities as the group lobbied the government for change.

Evers said that despite their petitions, they continued to see regular cases of prisoners returning from external interrogation centers with severe beatings, cigarette burns and marks from electric shocks.

More from GlobalPost: Libya's security depends on former rebels, for better or worse

“We are continuing talks with authorities,” she said. “Only if we see a commitment to change will we agree to go back, but so far this has not been the case.”

Misrata’s military leader, Ibrahim Betamal, denied such reports. He said that torture and ill treatment of prisoners in Misrata does not happen now, nor has it happened in the past.

Head of the Misrata council, Khalifa Zawawi, was not so adamant, but said they are working together with Doctors without Borders to improve the situation.

However, until the Ministry of Defense becomes organized enough to cover all prison facilities, control of prisoners remains scattered, he said.

“We have sent letters to all facilities regarding the treatment of prisoners. If anything further happens, it is personal mistakes,” he said.

Meanwhile, both police and rebel groups are still rounding up ex-Gaddafi fighters and suspected loyalists.

Abdul Hassan is the manager of Misrata’s investigation committee. He said his department has a list of about 40,000 suspects.

“We spend two or three months researching the information before we make an arrest. Then we bring them in for questioning,” he said. “If we find evidence of crimes, we send them for interrogation before they are transferred to prison.”

Charges include rape, murder, abuse of prisoners and theft. Even in battle, Gaddafi fighters who killed their enemy are considered guilty. Hassan said the evidence comes from a mountain of documents and informants from both inside and outside of Libya.

Although he receives the information gathered, the interrogation centers do not come under Hassan’s authority. He said he was unaware of the methods, but the purpose of this intense questioning was to gather more evidence and any possible information on the tens of thousands of captured rebel fighters and civilians who remain missing.

Categories:
Conflict & JusticeConflictLibya: From civilian to soldier and back
Tagged:
AfricaMiddle East