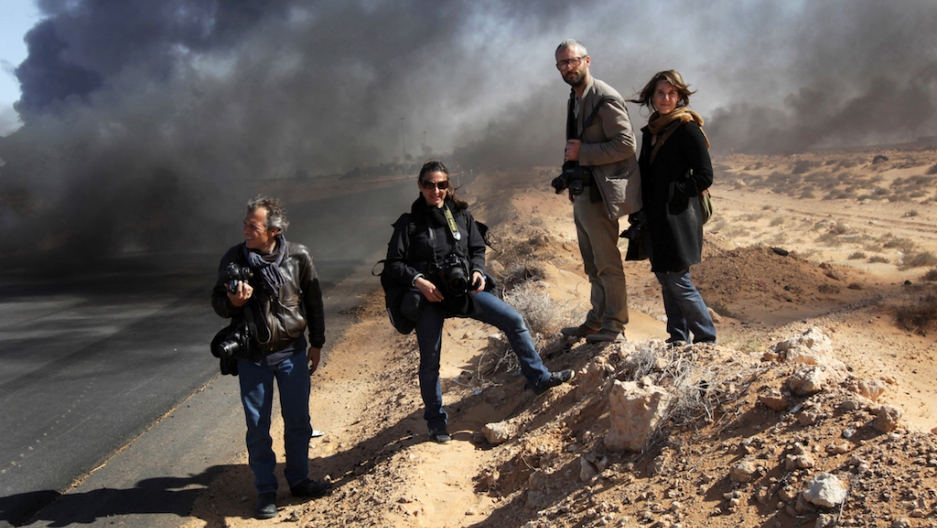 A group of journalists, including Tyler Hicks (2nd from right) who was on assignment with Anthony Shadid when he died in Syria Thursday and carried his body out of the country, are pictured March 11, 2011 in Ras Lanuf, Libya, during a pause in the fighting. (Photo by John Moore/Getty Images)
Credit: John Moore
Share

Like much of the rest of the world, Egypt awoke on Friday morning to the tragic news that long-time Middle East-based reporter, Anthony Shadid, had died while on assignment for the New York Times in Syria.

Shadid, one of the world's most admired and respected journalists, covered a myriad of conflicts across the region for over a decade, but for years he called the Egyptian capital, Cairo, home.

Read what was one of his latest dispatches from Cairo here.

Journalists, activists, artists and others reacted on Twitter to his untimely death from Egypt.

Hannah Allam is the Cairo bureau chief for McClatchy Newspapers.

Anthony Shadid was a friend & mentor to many Arab-American journalists. Lots of tears & memories in the community today. He's irreplaceable.

RIP Anthony Shadid. The world has lost one of its greatest journalists. An intrepid poet who reported on the Middle East like no other.

Hossam Bahgat is the director of the Egyptian Initiative for Personal Rights (EIPR), a local human rights organization.

RIP Anthony Shadid. Last decemeber he told me he was quitting smoking in a month.

The administrator for the Muslim Brotherhood's official online Twitter feed tweeted a quote from the editor-in-chief of the movement's official website.

1/2)"I've known Anthony Shedid since 08, we've had several discussions reexamining #MB, as a grassroots movement, through its human aspect

Cont 2/2) "not stereotypes. Anthony was extremely understanding & intelligent, we will miss him. May God bless his soul" Khaled Hamza

Hani Shukrallah is the editor-in-chief of Ahram Online, a web-based Egyptian newspaper.

I was privileged to know and be interviewed by @AnthonyShadid - a true journalist, no short cuts, deep understanding, and integrity- RIP

Reading tributes, I Can't forgive myself for not meeting@AnthonyShadid when he was in Cairo a few months ago .. I'm very sad #RIP