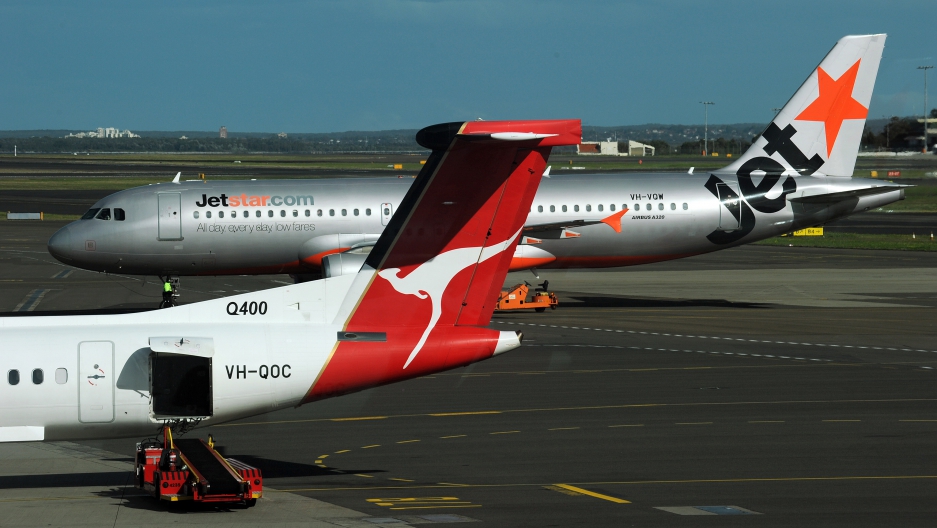 A Jetstar plane (top) is seen taxiing past a Qantas plane (below) on the tarmac at the domestic airport in Sydney on June 21, 2011.
Credit: Greg Wood
Share

Welcome to Australia. Glad you could make it. Many others couldn't — and they live here!

Yes, another Australian airline has left its passengers stranded overseas in their thousands.

This time it wasn't Qantas, doing what airlines in more competitive markets wouldn't dream of and grounding their entire fleet in order to break the will of striking workers.

Rather a small competitor to Qantas, the budget airline Air Australia announced it was grounding all international and domestic flights indefinitely this week as — get this — it ran out of gas money.

Mark Morda, a spokesman for the company's new administrators, KordaMentha, told radio station 3AW that the airline had run out of money to refuel its planes Thursday night.

"There's about 4,000 people overseas and they actively need to manage their own affairs, our call center can take the calls but they should not be relying on Air Australia to get them back," he said.

"They actively should be trying to find another airline."

And that was that, case closed (at least, perhaps, until somebody and their lawyers began organizing the class action lawsuit...).

According to the Fairfax press, Air Australia had already sold about 100,000 tickets for flights that will never take off, leaving 10,000 very angry travelers — both those waiting for a ride home from the airline's (mainly Asian) destinations, as well as out of Australia to their home countries.

Now, in such crises there's always someone willing to lend an ear, or a hand.

The Australian Government has said it will do what it can to help those stranded passengers, though it's been a little light on detail about what it can do.

Meantime, Qantas and its budget subordinate, Jetstar, have also said they'll help, although their flights are "almost full already" and they would need to add extra services.

Qantas CEO Alan Joyce — who himself recently became one of the country's most divisive figures after grounding the airline's entire fleet for 48 hours and stranding upwards of 80,000 people, only days after accepting a $2 million pay rise — has seen the opportunity in adversity.

Joyce told the Seven Network that: "If the [Air Australia] passengers come to a Qantas desk, a Jetstar desk, show their ticket, we’ll give them a ticket for the same value they’ve paid with Air Australia, so they don’t have to pay any more and they can try and recover that fare from their travel agencies or their credit card suppliers."

Big of him, and no doubt a welcome diversion to his own depressing announcement Thursday that Qantas would soon be shedding 500 jobs, with more to come, owing to an 83 percent drop on half-yearly profit.

So, welcome to Australia — where the beaches are wide, the beer is cold, and you'd better like beaches and beer because you may very well get marooned here by an airline dispute.