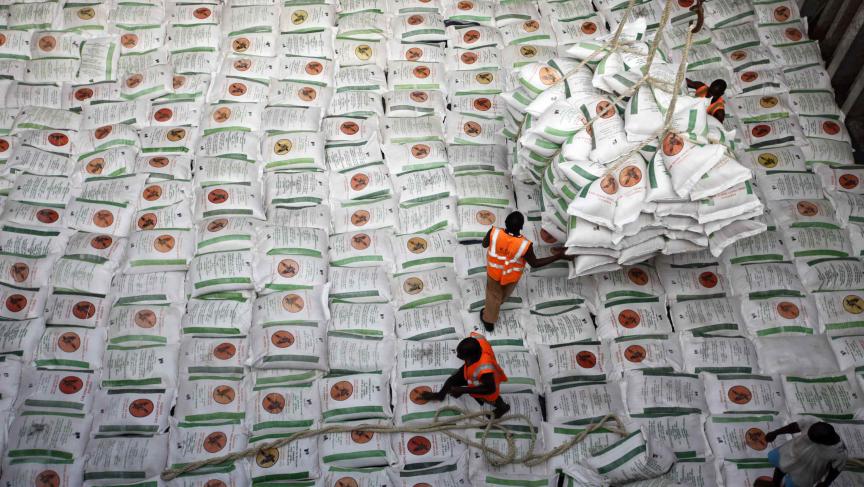 Kenyan port workers load relief food to a Somalia-bound ship at the Kenyan port of Mombasa, on Oct. 10, 2011. The 15,000 metric tonnes of rice is to help in the humanitarian crisis affecting some 1.1 million Somali nationals. (Photo by Joseph Okanga/Reute

After prayer one day at the Islamic Cultural Center in the Roxbury section of Boston, Hirsi Hassan and other young Somalis sat down to discuss the crisis in the Horn of Africa.

Despite growing up mostly in Boston, 21-year-old Hassan remembers life in a refugee camp and said the famine has affected all Somalis.

“I feel like the world has not reacted to what’s going on in Somalia.” It’s affecting the whole region, the whole Somali ethnicity, you know. The world should be doing more,” he said. “It should be the main news.”

Across the street at the Butterfly café, Somalia is the main news. Abdul Lahe Abdul Rahman, who left Somalia 30 years ago, has been collecting thousands of dollars in donations to send home. Rahman said he is also deeply disappointed with the public response.

“When Haiti had the earthquake, the whole world got up, especially the United States. Even I was part of it, helping the community of Haiti,” Rahman said. “But I don’t see that support from the state or the community or the neighbors or the country.”

Joel Charney said the situation in Haiti is the sort of classic disaster scenario. He’s vice president for humanitarian policy at InterAction in Washington, D.C., an alliance of relief and development organizations. He argued that the crises in Haiti and Somalia really aren’t the same, and that people aren’t apathetic about Somalia’s plight; they’re just confused:

“Even though Haiti is known to be sort of this hopeless bastion of poverty, it’s an easily accessible country that’s close to the United States. So rather than saying, 'Oh, it’s compassion fatigue,' I just think people are just looking at a genuinely difficult situation and are confused about the right way to respond,” Charney said.

Somali communities, from Toronto to Boston to Portland, Maine, to Minneapolis and Denver have concluded that they have only each other to rely on.

But while humanitarian groups agree Somalia's crisis hasn’t been on the radar like the earthquake in Haiti or the tsunami in Japan, people are giving.

Clam Lorenz, from PayPal, which collects millions of dollars on-line on behalf of charities, said millions have been raised for the Horn of Africa.

“We actually organized a campaign for EBay and Pay-Pal users in the U.S., U.K. and Canada, and they responded by raising $3.1 million for the Horn of Africa, famine relief," Lorenz said. "A large majority of that for the World Food Program.”

But that may not be enough. More than 2.5 million more Somalis require aid, and InterAction said a billion dollars is needed.

But at the Islamic Cultural Center in Boston Hirsi Hassan seethes with frustration. He’s convinced that Somalis will always receive less sympathy from the world community.

“The world has this stigma or this stereo-type. A lot of my friends they say ‘you guys are poor, you guys are skinny, you guys are hungry’, you know. And I feel like when you think of Somalia,” Hassan said, “people think of el Shabab or pirates. That’s what’s wrong. People have got to broaden their view of what’s there.”