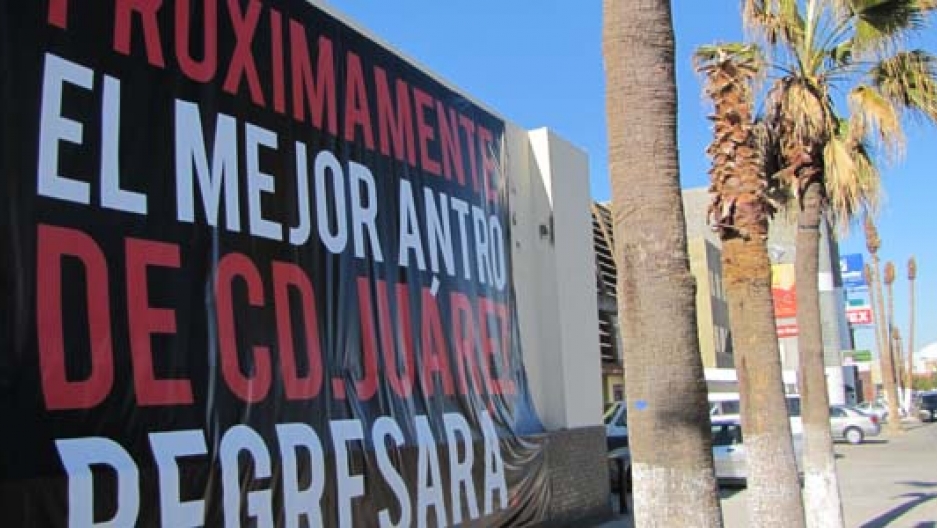 Share
Despite ongoing drug-related violence in the Mexican border city of Juarez, one industry is making a comeback: entertainment. Thanks to police protection in certain parts of the city, business owners are deciding to re-open bars and nightclubs that had been shuttered. For someone who's covered the terrible drug violence in Ciudad Juarez for the past four years, this is pretty amazing. Just minutes from the border with El Paso, Texas, Avenida Lincoln is experiencing a rebirth. About three years ago the ultra chic clubs on this Juarez street were reduced to crumbling walls, boarded up windows and empty sidewalks. Now some of these neglected facades are getting a face lift. New paint, new windows and a giant sign that says, "Coming soon: the best club in Ciudad Juarez returns." "Well the people are coming out more," says Sergio Mendoza. He's a doctor who's invested the better part of his savings into restoring the old Don Quintin club on Avenida Lincoln. Inside, the club is massive. He's torn off the part of the ceiling to open up the space, added cool incandescent lighting, and built a giant stage where a live band will play just below a second floor VIP section. "The economy is coming back," says Mendoza when I ask what possessed him to invest in what some consider Mexico's most dangerous city. "People just got tired of staying at home and having parties at home and they want to enjoy a great place. And that's what we're going to offer them." For Mendoza the economic incentive outweighs most security concerns. Not far from his up and coming club, I go see the director of a highly successful chain of Juarez restaurants and bars. He agrees business is getting better. Not long ago federal police set up security check points along Avenida Lincoln, which was enough to get some business owners to open back up. But there are still serious problems. One owner I spoke to asked that I not use his name, because his businesses are still paying extortion, also known as the "cuota". "The cuota is what you have to pay to the drug dealers," he explained. "If you don't pay that fee you can be kidnapped, or they can burn the place or kill somebody inside." The bloody battle between two rival drug cartels for control of the lucrative smuggling route into the United States has cost Juarez more than 10,000 lives. There have been bodies hung on overpasses, massacres at house parties and a deadly car bomb. Thousands fled the city while those who stayed barricaded their neighborhoods with boulders or cement barriers. Businesses suffered terrible losses, none worse than the restaurant industry, which saw a 70 percent drop in customers. "Those were dark times in Ciudad Juarez," says Guillermo Soria, director of the Juarez Chamber of Commerce. "We were all afraid to be out in the streets. Back then most parents didn't allow young people out at night." Juarez still has problems, recently a series of cop killings forced the mayor to move the entire police force into guarded hotels. Murders have dropped slightly, but continue on a daily basis. Reports of police abuse by citizens are also common. But even so, some Juarez residents say they're tired of living in fear. The economy has picked up, and with it, the nightlife. Soria says that's a good sign. "I think it's a very important business sector, because it means other basic needs are being met when people can go out an enjoy themselves. It also generates jobs, like waiters, cooks, taxi drivers. People go get their hair done and they buy clothes." On a recent Saturday night, I decided to check out the Juarez nightlife for myself. And yes, sure enough, it's back. The block behind Avenida Lincoln is packed with new clubs with names like The Red Queen, Nebula, BullDog, and Buffalo's. Parking attendants in hoodies usher drivers into crowded lots with flashlights, flower vendors on bikes heckle couples, and of course no nightlife in Mexico is complete without your sidewalk taco vendor. Outside one of the larger clubs, a long line of young people snakes around the building. I walk up to a group of friends and ask how long they've been in line. One hour, says a girl with flat-ironed hair. It's cold out and she's shivering in a short skirt and platform pumps. Her friend, a college student named Sara says it's time to take back the streets of Juarez. Sara is studying to be a nutritionist and wants to open a clinic here. She says she hopes the situation continues to get better, so she can open her business without worrying too much. And that was the spirit of most young people out that night. They wanted their city to make a comeback and, like the nightclubs, recover an energy that's long been missing in Ciudad Juarez.