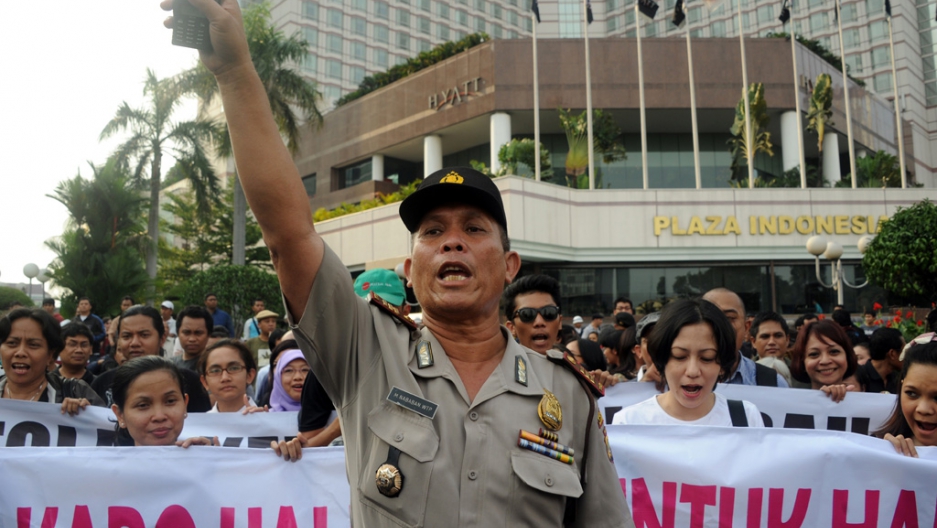 An Indonesian policeman gestures in front of protesters during a demonstration against the hardline Muslim group the Islamic Defender Front (flagged by the acronym FPI) in Jakarta on Feb. 14, 2012.
Credit: Adek Berry
Share

JAKARTA, Indonesia — Indonesia, the world's most populous Muslim-majority nation, is often held up as a shining example of how democracy can gel with moderate Islam.

But the freedoms that have given the country its reputation, and that many Indonesians enjoy, have also allowed for the hardline Islamic Defenders Front, a vigilante group known for raiding bars and nightclubs, to flourish over the last decade.

The group's tactics — which are often violent — have bothered many citizens since its founding in 1998. They say they are concerned the group, known locally as the FPI, could tarnish the country's image after years of heavy-handedness and intimidation. But rarely have Indonesians taken a public stand against it.

Until now, that is.

In more recent times, the FPI has expanded to target religious minorities. The group has forced the closure of churches in West Java and was allegedly at the center of a brutal mob attack on a minority Islamic sect, the Ahmadiyah, that ended in the fatal beating of three of its members in February 2011.

The shift in tactics and increased focus on religious minorities has spurred a smattering of citizens to finally speak their mind. On Tuesday, scores of civil society activists and celebrities rallied in central Jakarta, shouting “Indonesia is more peaceful without the FPI".

More from GlobalPost: Inside the Islamic Defenders Front

The rally was small — and it was cancelled shortly after it started due to security concerns — but it marks one of the first public demonstrations against hardline Islamists in a country generally reputed for its high level of tolerance and pluralism.

Timed to coincide with Valentine’s Day — another vice hardliners denounce — the protest came on the back of another over the weekend in which an indigenous Dayak tribe in Palangkaraya, the provincial capital of Central Kalimantan, prevented FPI leaders from landing at the airport to attend the opening ceremony of the group’s new branch office.

Agustine Lampe, a Dayak who participated in Tuesday’s protest, and whose family still lives in Palangkaraya, said people there dislike the FPI because of their use of violence, intimidation and attempts to sow sectarian discord.

“We don’t want anyone to ruin our brotherhood,” Lampe said, referring to the lack of social tension in her community. “We stay together in harmony, this is our philosophy.”

More from GlobalPost: New proof that hardliners have military backing in Indonesia

The lack of a strong support base for the FPI in Central Kalimantan, home to the largest Ahmadiyah community in the region, may have added fire to Feb. 11’s protest, but some analysts say it’s a different matter in Jakarta, where the FPI is much stronger.

Because there have been so few public demonstrations against the FPI, Wilson says that even a small show of opposition could have some effect.

“At the very least it can provoke another public debate about the place of these groups, because there are elements within some political parties who would like to take action against the FPI, but politically it’s a very difficult thing to do,” he said.

Some activists speculate that the government has failed to curb the FPI’s thug-like activities because of its long-standing, somewhat cozy relationship with police.

The FPI began in 1998 as a disparate mix of militia and gangs mobilized by the military and the police to counter the student-led reform movement that helped bring down long-running dictator Suharto, who resigned that year amid widespread protests.

The freedoms ushered in after Suharto's downfall gave birth to a vibrant media and civil society, and allowed for the formation of groups that were able to speak and act with little restriction after decades of oppression.

But leaders of the protest on Tuesday say the FPI and other hardline Islamists have abused those freedoms by using violence with impunity, and they say they've had enough of the government's failure to punish them for their abuses.

“We see how the state hasn’t put too much concern on violence conducted by the FPI and similar organizations,” said Tunggal Pawestri, a spokeswoman for the Movement for an FPI-Free Indonesia, the group that organized Tuesday’s rally.

Inspired by the Dayak protest, Tunggal and several other activists started sending messages via Twitter and Facebook about the need to harness widespread anger and distaste for the FPI.

“We want to bring confidence to all of civil society that we can voice our objection to these kinds of organizations; we can refuse if they want to do violence in our neighborhood,” Tunggal said. “We really need to break the silence.”

The majority of Indonesia’s 240 million people practice a moderate form of Islam, and the FPI and other hardline Islamist groups are on the fringe.

But Wilson says they’ve been skillful at manipulating social and economic tensions to their benefit.

“That gives them a higher profile and makes them appear more significant than they are,” he said.

In response to news of the protest, a spokesman for the FPI told the English-language Jakarta Global that the protesters were mere Western stooges. In the hours before the rally, rumors circulated among the FPI and its supporters that the demonstrators were planning to attack the home of the group’s leader, Habib Rizieq Syihab.

To ensure security, a heavy police presence was on hand as the rally got started. But after only an hour of speeches and chants, the police cancelled the event over fears that hardliners were on their way to the scene.

President Susilo Bambang Yudhoyono has remained mostly muted about the FPI and its antics. But on Monday he delivered a televised address in which he touched the on protest in Central Kalimantan.

He also said he had spoken with the governor in Central Kalimantan about the protesters’ actions and was holding discussions on how to prevent repeated acts of violence with the ministers of Home Affairs and Justice and Human Rights as well as the national police chief.

“If we listen to yesterday’s speech, still [the president] did not provide us with a clear answer on how to solve these issues,” she said.

Despite fears of continued intimidation from the FPI, Tunggal said people needed to express their disappointment with the lack of government action because without the push from citizens she feared the country's leadership will continue to do nothing.

“They’ve managed to get away with consistently breaking the law, terrorizing people, being given much greater or exerting much greater influence than they should," Wilson said.

"If the government isn’t going to do anything, than the people need to be prepared to show they’re willing to make some kind of stand."