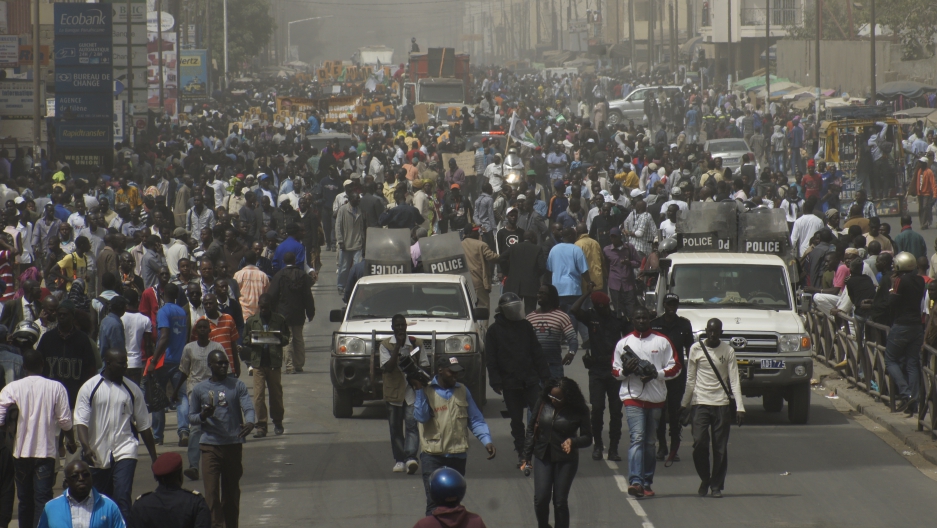 M23 demonstrators take to the streets of Dakar to protest the reelection bid of President Abdoulaye Wade.
Credit: AFP
Share

Demonstrations against the reelection bid of current President Abdoulaye Wade escalated Wednesday as police fired tear gas to disperse an opposition march, according to Africa News.com.

Early in the day, protesters pelted his car with rocks while he campaigned in Nguegnene, forcing the Senegalese leader to abandon the vehicle, according to Voice of America.

The 85-year old Wade is seeking a third term as the country's president, a position he has held for the last 12 years.

Demonstrators want Wade to stand down from the Feb. 26 ballot, claiming that the Senegalese President is in violation of the 2001 constitution that sets a limit of two presidential terms.

But, according to BBC News, the president now says that the current constitution do not apply to his first mandate as it was created after his first election.

"I've had enough. He's too old to govern. Like all old men he is becoming senile," one Senegalese protestor told the Associated Press.

A massive demonstration in June was held after the Wade tried to amend the constitution to lower the threshold for the president to be elected to 25% of the votes, according to BBC News.

Violent protests erupted against in late January when the country's highest court validated Wade's candidacy for a third term which the opposition says is unconstitutional according to to the Zambian IOL News agency.

Thirteen opposition candidates are running against Wade in the election.