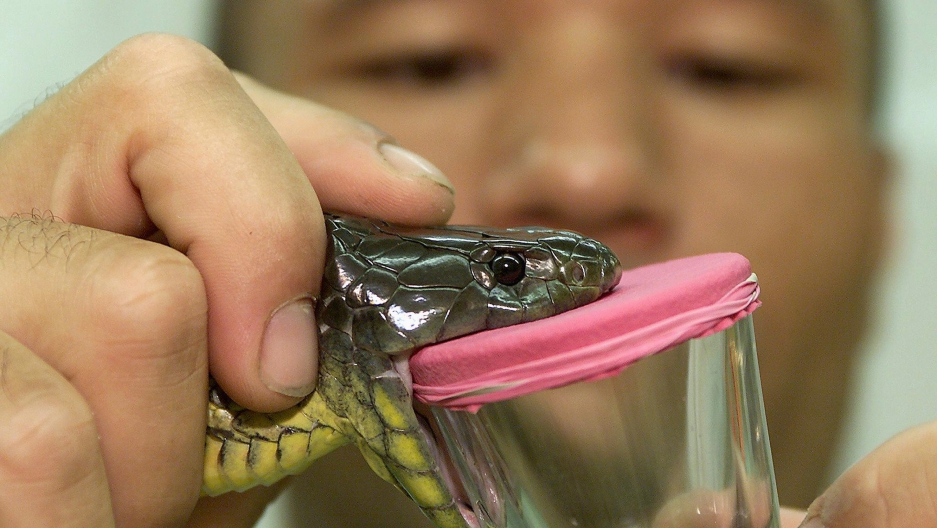 The Sun might be a newspaper on the verge of shutdown, but it can still generate a headline half a world away.

On Thursday, the embattled Murdoch tabloid reported the ordeal of a British tourist "bitten down under" by a deadly Aussie snake while answering call of nature.

Jackson Scott, 29, from Glasgow, had reportedly "squatted" in the dark in rural Tasmania — the island state in Australia's far southeast that is so unnewsworthy it's routinely left off the national map — when a highly venomous tiger snake bit his testicle, The Sun reported.

Compelling stuff, huh. It gets better.

Scott told the paper in the exclusive interview that when he begged best mate, Roddy Andrews, to suck the venom out, his buddy refused.

He did, however, agree to drive Scott 40 minutes back to the capital city, Hobart, so that doctors could administer an antidote.

Still, Scott was, the paper wrote, lucky to be alive after the "painful and embarrassing encounter."

Embarrassing? Okay, the guy agreed to have his photo printed in the UK's biggest-selling daily newspaper, so that might be stretching it.

But the rest seems legit.

Tiger snakes, like the majority of Australia's 130 terrestrial snake species, are venomous, and according to ReptileChannel.com have been responsible for "many snakebite deaths in Australia."

The website says the snakes are are also quick to bite when cornered, or presumably when squatted upon.

The tiger snake is reportedly the second-most deadly member of the Elapidae family, after the taipan.

However, according to the Tasmanian Parks and Wildlife Service, there have been no recorded deaths in that state from snakebites "for several decades."

So perhaps there's a cautionary tale in Scott's story, as told to The Sun — itself dealing with a rather venomous situation, with UK authorities having arrested several of its top staff on suspicion of bribing public officials.

"I went into the garden at four in the morning after a night in the pub to save flushing the toilet, because water is precious in the outback. Just as I finished ... it bit me."

The lesson may be to let Australians worry about their own water shortages and stay inside at night to pee.

(The other lesson might be — and this is directed at The Sun's editors — that Tasmania being a relatively small island doesn't have an "outback," which is generally considered to exist in the middle of mainland Australia. However, they've been uder a lot of strain, and so this is surely an oversight rather than exaggeration for dramatic effect.)

For good measure, The Sun recounts "a similar incident" in 2008 in Australia.

That was, "when a deadly brown snake bit a tourist's penis while he made a roadside restroom stop in a remote area northwest of Cairns, Queensland."

The victim reportedly also survived after being rushed to hospital.