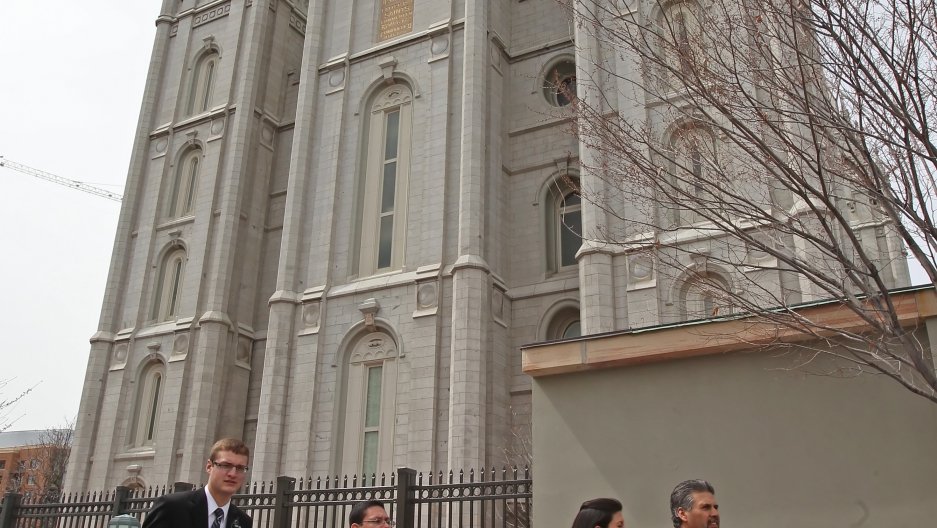 Mormon faithful walk past the historic Salt Lake Temple in Salt Lake City, Utah, on their way to the 180th Annual General Conference of the church on April 3, 2010.
Credit: George Frey
Share

Mormon church leaders have apologized to the family of the late Holocaust survivor and Jewish rights advocate Simon Wiesenthal after a researcher discovered that his Jewish parents were posthumously baptized by Mormon church members, the Associated Press reports.

Mormons regularly baptize deceased non-believers and members of other religions to offer them the option of salvation in the afterlife, USA Today reported. The rite does not make them Mormon, the church says.

In 1995, Jewish leaders prevailed upon Mormon church leaders to stop the posthumous baptism of all Jewish people, except when the person is a direct ancestor of a Mormon, the Huffington Post reported. However, researcher Helen Radkey recently found, some Mormons have ignored the agreement.

Radkey came across records showing that Simon Wiesenthal’s parents, Asher and Rosa Rapp Wiesenthal, were baptized at Mormon temples in Arizona and Utah in late January, the Huffington Post reported.

"We sincerely regret that the actions of an individual member of the church led to the inappropriate submission of these names," Michael Purdy, a spokesman for the Church of Jesus Christ of Latter-day Saints, said in a statement on Monday, the AP reported. "We consider this a serious breach of our protocol and we have suspended indefinitely this person's ability to access our genealogy records."

"We are outraged that such insensitive actions continue in the Mormon temples," Rabbi Abraham Cooper, associate dean at the Los Angeles-based Simon Wiesenthal Center, told the AP. "The only way such insensitive practices would finally stop is if church leaders finally decided to change their practices and policies on posthumous baptisms, a move which this latest outrage proves that they are unwilling to do.”

Abraham Foxman, the Anti-Defamation League’s National Director and a Holocaust survivor, explained in a statement why it’s important to stop the practice, USA Today reported. “Holocaust victims died precisely because they were Jewish,” he said. “Listing Jews as 'Christian’ on one of the most researched genealogical sites in the world inadvertently aids and abets denial of the Holocaust.”

Radkey also found the name of Nobel Peace Prize winner and Holocaust survivor Elie Wiesel, along with the names of his father and maternal grandfather, had been entered into a Mormon database for the deceased, which can be the start of the process leading toward posthumous baptism, the Huffington Post reported. Their names have since been changed to "not available," Radkey told the Huffington Post.

Wiesel – who is actually still alive and kicking at 83 – told the Huffington Post: "I think it's scandalous. Not only objectionable, it's scandalous.” He suggested posthumous baptism is an issue that deserved GOP presidential hopeful Mitt Romney’s attention. "I wonder if as a candidate for the presidency Mitt Romney is aware of what his church is doing,” Wiesel said to the Huffington Post. “I hope that if he hears about this that he will speak up.”