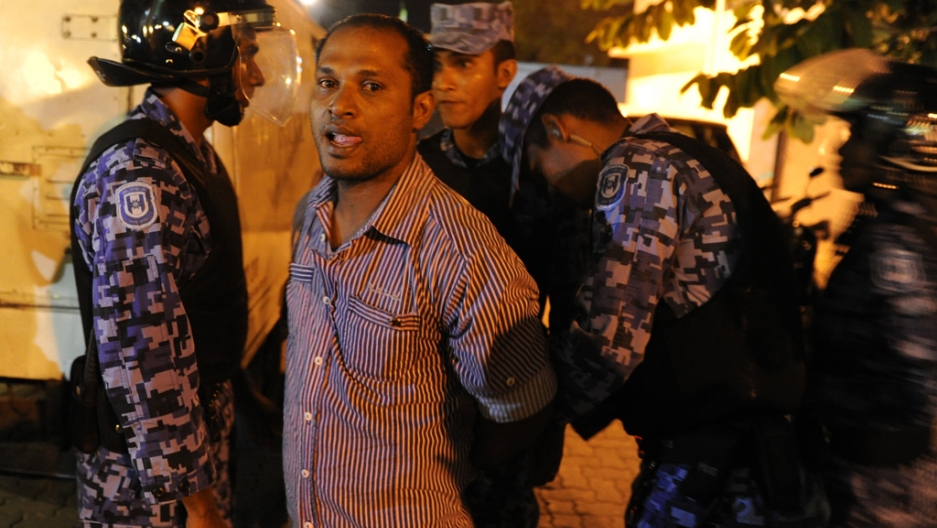 BANGKOK, Thailand — Mohamed Nasheed woke up last Tuesday the president of Maldives, one of the world’s premier honeymoon destinations.

A little over 24 hours later, he was ducking into a convenience store in a desperate attempt to hide from the security forces he had commanded the day before.

A bizarre video, apparently filmed by the storeowner, shows customers going about their shopping while police dressed in riot gear storm in and drag out Nasheed and Mariya Ahmed Didi, the former chairperson of Nasheed’s Maldivian Democratic Party (MDP).

It has been a bad week for the man viewed by many in the international community as a godfather of the Arab Spring.

Nasheed was lauded as an activist who managed to galvanize a protest movement and topple a longstanding corrupt and autocratic regime in his Muslim-majority country, much like the crowds in Tahrir Square. The feeling throughout the nation, which is made up of 1,200 islands, when Nasheed came to power in 2008 was described as "euphoric."

But after three years of his rule, a disgruntled populace tired of continued corruption and empty promises was ready to turn on him, a stark warning to the nascent revolutionary movements across the Arab world.

The final straw came when Nasheed detained the chief justice of the criminal court, Abdulla Mohamed, a figure viewed as being partial to the previous regime. When Nasheed's security forces picked up Judge Abdulla, many saw it as a brazen transgression of the rule of law. Quickly, the public took to the streets against Nasheed.

After the arrest, there were three weeks of increasingly volatile protests against him, culminating when Nasheed resigned on Tuesday, Feb. 7 on live television. On Feb. 8, he claimed that it had been a coup, that he had been forced to resign at gunpoint, which those in power now deny. On Feb. 9, an arrest warrant was issued for him, although it has not been acted on yet.

By Feb. 10, his family had fled to Sri Lanka. Over the weekend his successor Waheed Hassan — the man who had been Nasheed’s vice president — called him a dictator.

Following Nasheed’s resignation Judge Abdulla has returned to his role, and has now turned the tables by issuing an arrest warrant for Nasheed.

“There is a sort of Shakespearean irony about this,” reflected Paul Roberts, Nasheed's communications advisor.

In the meantime, Nasheed supporters and security forces clashed throughout the islands. The level of violence, unprecedented in the islands' modern history, has left citizens reeling.

In Male, the nation’s capital, police descended on peaceful demonstrators with brutal zeal, their actions captured and broadcast on television. Elsewhere on the islands, Nasheed supporters torched police stations and criminal courts, burning them to the ground.

At least 70 MDP supporters were rounded up and detained in one of the southern atolls, with reports of beatings in custody.

Over the weekend, Nasheed refused a US call for the formation of a unity government. He now insists that there be a quick election to solve the crisis, and has threatened to take to the streets in the absence of one.

Asian precursor to the Arab Spring

Regardless of whether it was a coup or not — Nasheed said it wasn't immediately after stepping down and has since changed his tune — or whether Nasheed regains his post as president, this has been an ignominious end to a once-promising beginning.

The previous incumbent, Maumoon Abdul Gayoom, ruled the islands with an iron fist for 30 years, but was defeated by Nasheed in the country’s first ever free elections in 2008.

“Euphoric,” Ahmed said, remembering the mood in the capital when Gayoom stepped down.

Ahmed, who knows Nasheed personally from their time working together in the democracy movement, said “people respected Nasheed for his courage.”

Nasheed was widely admired for facing up to the regime, enduring prison time and beatings for the cause of bringing democracy to the islands. In the aftermath of the wave of protests sweeping the Middle East last year, many observers pointed to Nasheed’s movement as a precursor to the Arab Spring.

“I think there are similarities one can draw,” Roberts said. “Maldives is a 100 percent Muslim country, with an authoritarian ruler for 30 years, and a young population that was very frustrated and forced Gayoom’s hand to allow reform. Until three or four days ago it was a model actually for getting it right. Maldives was doing well in Amnesty reports, Reporters without Borders reports, lauded in US State Department reports.”

But the parallels are not all positive, something Nasheed himself noted in an op-ed he wrote for the New York Times following his resignation.

"Let the Maldives be a lesson for aspiring democrats everywhere: the dictator can be removed in a day, but it can take years to stamp out the lingering remnants of his dictatorship," he wrote.

Roberts concurs. “The irony now is that even when you get it right, say compared to the mess today in Egypt, they [the previous regime] can still come back and get you,” he said.

The populist who wasn't popular

Nasheed has been a darling of the international community, viewed as the nice guy who finally finished first. But according to Maldivians, this papers over many of Nasheed’s flaws while ignoring former autocrat Gayoom’s strengths.

“Gayoom is probably the shrewdest politician Maldives has ever seen,” said Arzan, a former activist who campaigned against Gayoom’s regime. “A lot of credit goes to Nasheed, he was very courageous. ... Nasheed was a populist but not a popular person.

“Gayoom did not think he could lose the election. To be fair he almost did win — he got 45 percent of the vote while Nasheed only got a bit over 20 percent. The only way Nasheed defeated Gayoom was that in the second round run-off the opposition coalesced around him. And soon after all his coalition partners deserted him.”

In fact, Nasheed was not what he seemed to be in many regards.

His most high-profile international accomplishments have been in climate change protest. He famously held an underwater cabinet meeting, was regarded as one of the few who stood up to bullying by the United States and China in United Nations climate change conferences, and had unveiled a widely praised initiative to make Maldives carbon neutral by 2020.

At home though, there have been few signs of anything actually being done.

“As far as domestic environmental policy is concerned, he hasn’t delivered. No one knows how carbon neutral by 2020 is going to be financed or how it’s going to be achieved,” said Arzan.

More damning are allegations of corruption towards Nasheed’s close supporters and advisors.

“I feel disappointed [in Nasheed],” said Ahmed, “because his government turned out to be corrupt too.”

“The joke here is that if you don’t give me a lagoon to develop as a resort, then I won’t support you for the next election,” said Afzan. “And you’ll usually get the island.”

Many supporters were disillusioned when the country’s anti-corruption commission, comprised of nominees by Nasheed himself, was overruled by the government in its decision to stop a US$20 million land development project because the bidding process was unfair. The beneficiary of the project was Reeko Moosa Manik, the present interim chairperson of MDP.

Ahmed says he no longer supports Nasheed, but that he could never support Gayoom’s party either. If elections are forthcoming, he does not plan to vote. He describes Nasheed as humble and friendly as a person, but arrogant as a politician.

“My personal view in retrospect is he overstepped in arresting Judge Abdulla. It was an unwise thing to do in hindsight,” said Nasheed’s advisor Roberts.

When Nasheed resigned, the statement he made said that he would rather give up power than use excessive force to cling to it. It reinforced his image within the international community, and even domestically it helped redeem him briefly.

“I thought he looked so presidential,” said Hasan, the opposition MP, “resigning rather than hanging on to power. Of course, now he’s changed his tune …”

Since Nasheed changed his tune, the international media have begun to discover the less savory truths about his record.

It is becoming increasingly clear that Nasheed’s claims that it was a coup are truthful, but his reputation has suffered with the revelations that have accompanied that conclusion.