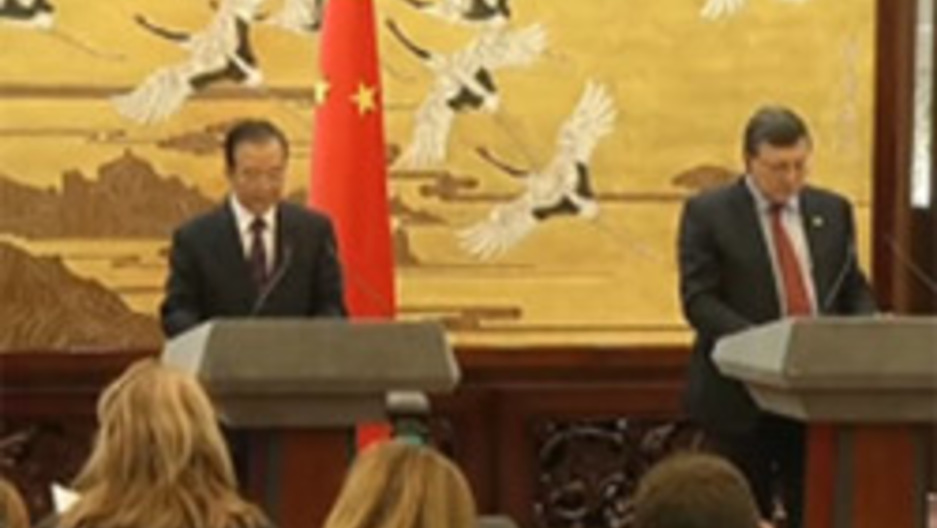 Share
While China's Vice President Xi Jinping visits the United States this week, European Union officials were in Beijing on Tuesday, meeting with Chinese officials. The EU is looking for some financial aid. The EU meetings came amid more grim economic news in Europe. Late on Monday, Spain, Italy and Portugal saw their credit ratings downgraded by Moody's. The ratings agency also cut the credit outlook for France, Britain and Austria. So it's little wonder that European leaders want help from China. Specifically, they're looking for China to contribute to the planned $665 billion European bailout fund. Chinese Premier Wen Jiabao said on Tuesday that his country stands ready to help. "China is firm in supporting the EU in dealing with the debt problems," Wen said. He added that China is ready to increase its participation. "We match our words with our actions." But Wen didn't actually spell out any concrete actions that China plans to take. In fact, a Chinese press statement released after the meetings didn't mention the eurozone crisis at all. Still, European Council President Herman van Rompuy, who's in Beijing, welcomed Wen's "positive attitude." "We also welcome China's readiness to enhance consultation and cooperation on the stability of the eurozone. The Union remains China's biggest trading partner and China is now close to becoming the EU's largest trading partner as well." China, by some estimates, is just about to overtake the United States as Europe's largest trading partner. More than $600 billion worth of trade now flows between China and the EU each year. Johan van Overtveldt, author of "The End of the Euro," said China has a strong interest in keeping Europe on its feet. "It's a huge market for their economic machine. So China has every reason to avoid a real collapse of the European economy," he said. Recent reports by the International Monetary Fund indicate that a European economic meltdown could cut Chinese economic growth in half. Still, the Chinese public position on the eurozone crisis hasn't changed much in recent months, largely because many in China think that throwing money at Europe's debt problems won't solve the underlying issues. "China has always said that China can't be responsible for solving Europe's structural problems," according to Andrew Leung, a Hong-Kong based international business consultant. "The European Union is a trade and economic union, not a financial and political union; there's a lack of central financial discipline that can be imposed on some of the weaker members," Leung said. "So these structural problems are unlikely to be solved by China herself. Speaking of those structural problems, EU finance ministers were supposed to meet on Wednesday to discuss the next round of bailout money for troubled Greece. That meeting, however, has been cancelled because Greece failed to meet the conditions for a new bailout.