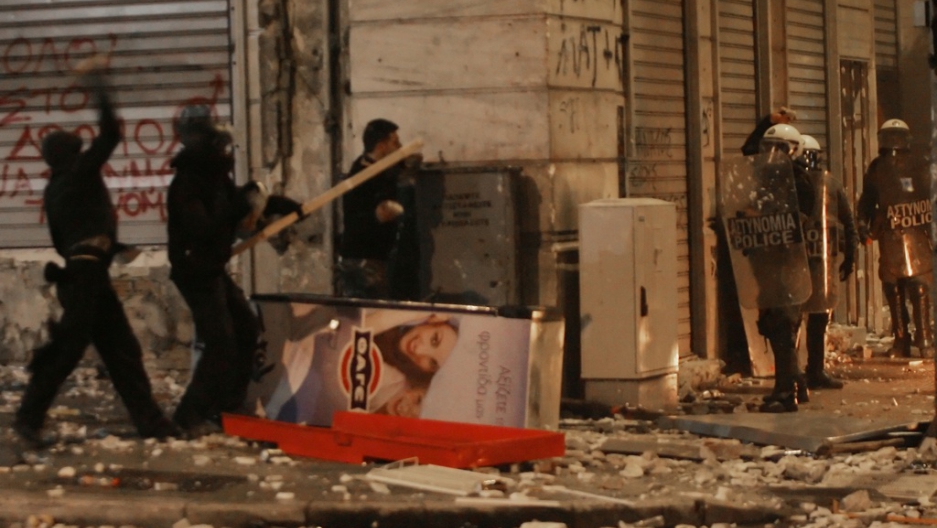 Demonstrators clash with riot police during violent protests in central Athens on Feb. 12, 2012. In Germany, "shitstorm" has been voted the top English loanword of 2011. The word is commonly used to describe the economic chaos in Greece.
Credit: Milos Bicanski
Share

BERLIN — In a Vanity Fair article on Germany and the euro crisis, Michael Lewis played with the idea that many Teutonic peculiarities could be traced to a scatological bent in the national psyche. To illustrate the point he argued that the German language was unusually well furnished with references to excrement.

But there was apparently one important word the Germans lacked, and had to import from English: “shitstorm.”

The word has proved so popular, a jury of German academics has named it 2011’s best English loanword.

Anatol Stefanowitsch, who headed the jury, said Monday that shitstorm “fills a gap in the German vocabulary that has become apparent through changes in the culture of public debate.”

The jury, made up of linguists and language experts, defined the vital word as a “public outcry, primarily on the Internet, in which arguments mix with threats and insults to reach a critical mass, forcing a reaction.”

The word became widely used here during 2011 both in reference to the euro debt crisis engulfing Greece, and the massive plagiarism scandal surrounding former Defense Minister Karl-Theodor zu Guttenberg, which forced him to step down.

The impact of euro crisis was also apparent in the runner-up. “Stresstest” was the second most important English word that had been incorporated into German, the jury decided.

Other contenders were “Tablet”, “Cloud” and “Occupy.”

The “Anglicism of the Year” contest was established in 2010 to recognize the contribution English continues to make to the German language. That inaugural year the word “leaken” was the winner, denoting the verb “to leak,” which came to prominence because of the WikiLeaks website.

“The discussion about language in Germany is preoccupied with the idea that foreign words, particularly when they come from English, are a danger to the survival of the German language,” Stefanowitsch said in a statement. “This borrowing of words is a natural process, through which people have always expanded their language’s vocabulary.”