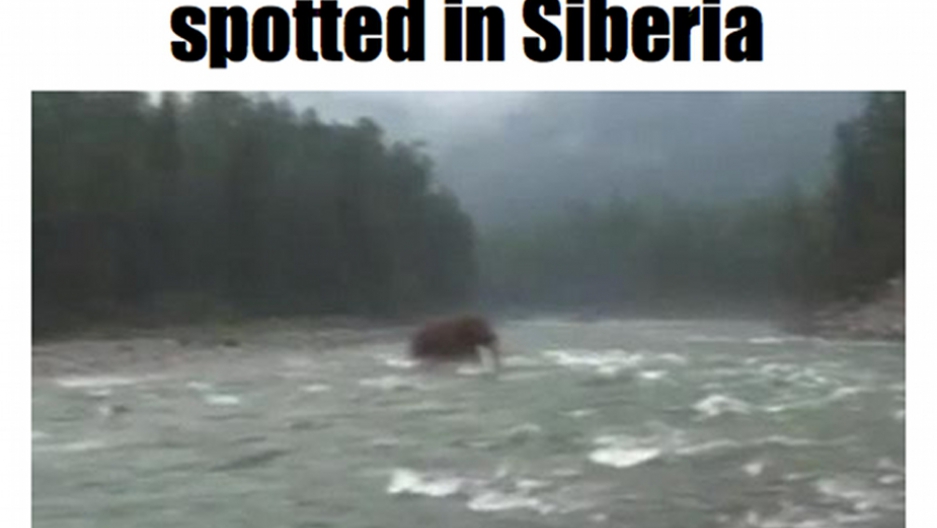 An Australian filmmaker says a video of a purported “woolly mammoth” – extinct for 4,000 years – crossing a river in Siberia, which has gone viral on YouTube, was doctored from footage he shot last July while out in the Russian wilderness.

The video, published alongside an exclusive article by Britain's The Sun newspaper, shows the blurred, wobbly image of a large beast crossing a shallow, rocky river.

More on GlobalPost: Purple squirrel makes a splash in Pennsylvania

The Sun reported that the “jaw-dropping” footage was taken by a government engineer last summer in Siberia's Chukotka Autonomous Okrug region, while he was surveying a road project.

However filmmaker Lou Petho told GlobalPost today that he, in fact, shot the footage – which is of the Kitoy River in Siberia's Sayan Mountains – while making a documentary about his grandfather's escape from a Siberian prison camp in 1915.

“I instantly saw it as my footage ... what nailed it was the stone arrangements in the foreground; they lined up perfectly,” says Petho, who is based in Thailand.

The woolly mammoth video has created quite a stir, attracting almost 3 million hits in a matter of days, with dozens of media sites further reproducing the story.

For its article, The Sun spoke to paranormal writer Michael Cohen, who has claimed the copyright to the film, along with production company Barcroft Media.

The paper says the animal's hair in the video “matches samples recovered from mammoth remains regularly dug up from the permafrost in frozen Russia,” while Cohen reminds us that mammoths are being sighted “still kicking around” in Siberia.

"Siberia is an enormous territory and much of it remains completely unexplored and untouched by humans," Cohen told The Sun, which did not dismiss the possibility the video was, in fact, a hoax.

More on GlobalPost: Woolly mammoths to be cloned by Russian and Japanese scientists

Although the two videos are obviously shot in the same location, the grainier mammoth video appears to have been made using a handheld camera, while Petho's footage of the river is filmed using a tripod.

“This is easily explained,” says Petho. “All you have to do is take a smaller frame area and move it around in a program such as After Effects or Motion.

“The mammoth could be a real elephant cut out, or a CGI (computer-generated imagery) model the creator inserted. Difficult details such as the feet are covered up by the water, that's why you don't see it making it to the other side.”

When GlobalPost took a close look at the rim of the treetops, the ripples in the water, and the stones on the beach, we had to concede the footage appeared to match up. What do you think of our comparison? (Post your comments below).

Hoax or otherwise, Petho says he's not laughing, and that after complaining to Barcroft Media, he's been assured he'll be properly compensated for the unauthorized use of his footage.

Compare the footage: What do you think?

The woolly mammoth video, featured on The Sun's website: