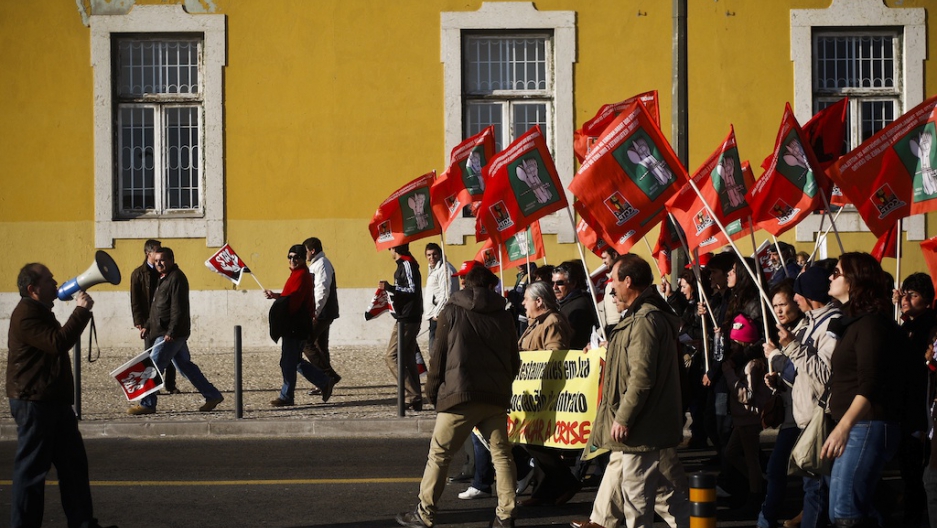 BRUSSELS – It was an ominous welcome.

A huge crowd demonstrated in Portugal’s capital on Saturday, in advance of a visit to Lisbon this week from officials representing the “troika” — the European Commission, International Monetary Fund and European Central Bank — which is due to assess progress in implementing terms of last year’s 78 billion euro ($103 billion) bailout.

Organizers said the rally, in protest of austerity measures, was Portugal’s biggest in three decades. They claimed that 300,000 people had joined.

“The representatives of outside interference are coming Portugal,” Armenio Carlos, leader of the CGTP trade union told the crowd. “The country needs the noose taken from its necks so we can breathe, live, work and create wealth.”

For over a year Portugal has been saddled with a “next Greece” label. The economy is expected to shrink 3 percent this year; bond yields are soaring to unsustainable levels; government debt is set to top 115 percent of economic output; unemployment is running at 13.6 percent.

It all looks ominously similar to the catastrophic situation at the other end of the EU’s southern flank. Portugal does, however, enjoy some advantages missing in Greece.

The center-right government was elected in June with a mandate to introduce tough austerity measures. It has a solid majority in parliament and the main Socialist opposition has also signed up to the reforms enabling Portugal to avoid the bitter politics dividing Greece. Public discontent has not spilled over into the kind of violence that erupted in Athens again this weekend.

Exports are picking up and tourism – a major industry – is breaking records, benefiting from travelers’ unease about stability in North Africa, and from cash-strapped locals vacationing at home.

Most significantly, the Portuguese government seems to enjoy a level of trust in Berlin and other key EU capitals that Greece has lost. Germany has hinted that Lisbon could ask for more rescue money or more time to pay back if it needs to.

“If there appears a necessity for an adjustment in the Portuguese program, we would be ready for that,” German Finance Minister Wolfgang Schaeuble was overheard telling his Portuguese counterpart at a meeting in Brussels last week. Germany’s Economy Minister Philipp Roesler on Sunday said Spain and Portugal “are much more committed than Greece.”