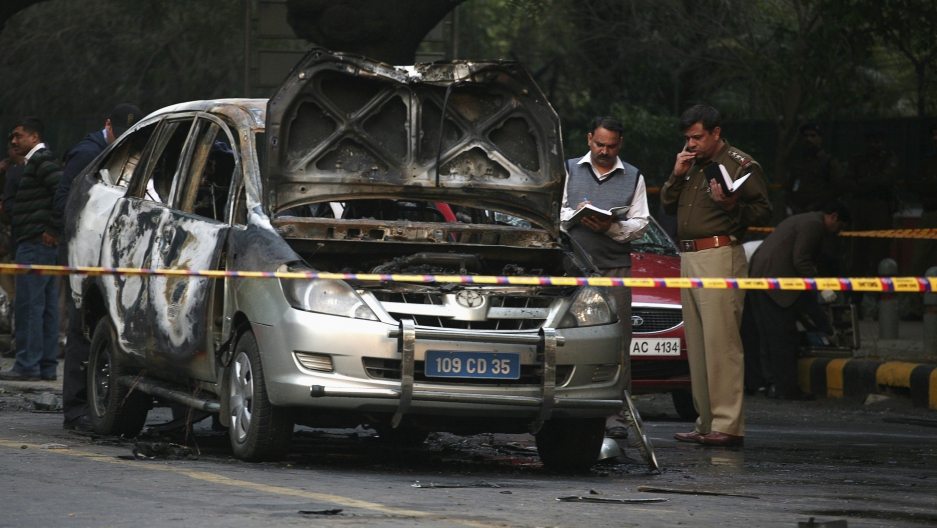 Police and forensic officials examine a damaged Israeli embassy car after an explosion in New Delhi on Feb. 13, 2012. Bombers targeted staff at Israel's embassies in India and Georgia on Monday, the foreign ministry said. (Photo by Parivartan Sharma/

The simmering tension between Iran and Israel may have taken another turn on Monday, with Israeli officials blaming Iran for two attacks on Israeli diplomats abroad.

In India, an explosion ripped through a diplomatic vehicle, wounding the driver and a diplomat's wife. And in in Tiblisi, Georgia, Israeli officials say the thwarted a second attempted car bombing.

Prime Minister Benjamin Netanyahu blamed Iran and Hezbollah for both attacks and indicated there may be evidence of that recovered from the bomb in Tblisi.

Isabel Kershner, Jerusalem correspondent for The New York Times, said the attacks come at a time of high tension between the two nations, with Israel considering an attack on Iran to try and prevent it from building a nuclear weapon. Iran blames Israel for a series of attacks against its nuclear scientists and vowed to retaliate.

"One thing I'd point out is the attacks today came almost four years to the day after the killing of Imad Mughniyah in Damascus," Kershner said.

Mughniyah was a top commander for Hezbollah, killed Feb. 12, 2008 in a car bomb blast most often attributed to Israel, though some think he may have been killed by a rival Hezbollah faction or even by the Syrians.

So far, no one has claimed responsibility for the Monday morning attacks.

"There have been various reports in the last few months of plans for an attack that was thwarted in Azerbaijan," Kershener said. "We've had reports from Thailand of local Thai authorities arresting what they called a Hezbollah operative and they said that arrest came after strong coordination with Israel. So we're looking at, if anything, a pattern that really spreads all around the world at this point."

Ronen Bergman, contributing writer for The New York Times Magazine, said there's been considerable anticipation of an attack like this, ever since the so-called shadow war between Israel and Iran began to heat up.

He said Israeli officials and entities at home and abroad have been on high-alert since the wave of assassinations aimed at Iranian nuclear scientists.

"What is important is that the Iranians are convinced that the Israeli Foreign Intelligence Service, the Mossad was behind the assassination of these people," Bergman said. "Therefore, it was just expected someone would like to take revenge."

As yet, there's no evidence to link the attacks to Iran. But Netanyahu's comments blaming Iran may be an effort to set the stage for how the world views the events, should Hezbollah operatives be arrested in Georgia or India.

"He would like to portray the whole playground, the Middle East, as an ongoing clash between Iran that is trying to hit Israel," Bergman said.