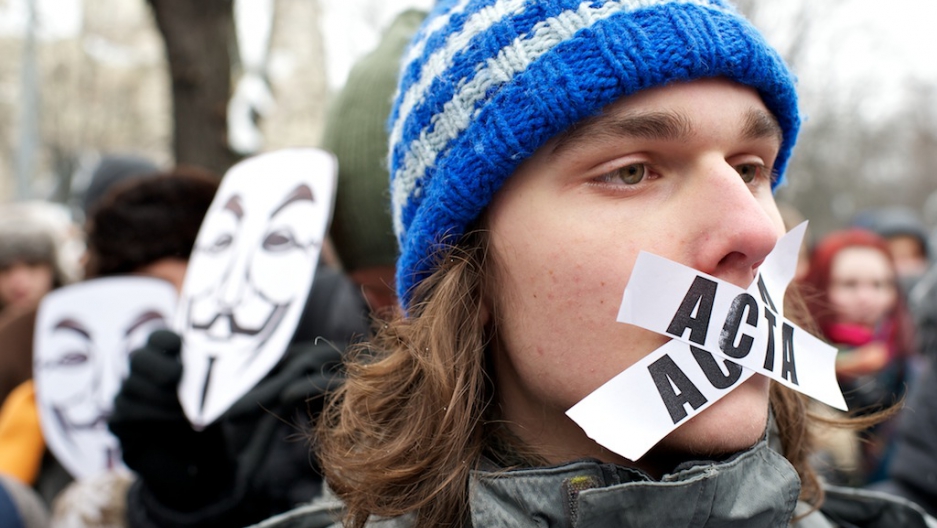 BERLIN, Germany — The government here has stalled the Europe Union’s attempt to sign an international anti-piracy treaty. Thousands of Germans hit the streets this weekend to protest against the agreement, and even within the halls of power, there are concerns about the ramifications of the crackdown on online piracy.

Germany’s Justice Minister Sabine Leutheusser-Schnarrenberger, known for her concerns about government overreach into online privacy, has said she is holding off signing the Anti-Counterfeiting Trade Agreement (ACTA), saying it requires further discussion.

The agreement, similar to the Stop Online Piracy Act (SOPA) in the US, is designed to standardize international copyright-protection measures, but has raised concerns that it could herald an era of Internet censorship.

The EU’s executive arm, the European Commission, had negotiated the treaty with several other non EU countries, including the US and Japan. However on Friday the surprise news emerged that Germany was not yet prepared to sign up.

Undoubtedly the thousands of Germans who gathered over the weekend to protest the treaty would like to see it killed off completely. Critics of ACTA fear that it will bring Internet censorship, and will increase back door monitoring. On Saturday, 18,000 people marched against ACTA in Munich and around 10,000 gathered in Berlin to voice their concerns. There were also smaller protests in more than 60 towns and cities.

However, there is also some criticism in Berlin about the way the German Justice Ministry blocked the signing of the bill. It looks like yet another issue that could cause friction within the bickering ruling coalition of the pro-business Free Democrats (FDP) and Chancellor Angela Merkel’s conservative Christian Democrats (CDU).

Justice Minister Leutheusser-Schnarrenberger has called for more clarity from the EU and says Germany won’t sign the treaty until after a debate by the European Parliament in June. Leutheusser-Schnarrenberger is a member of the FDP, a party that sees Internet freedom and privacy as core themes. The FDP general secretary Patrick Döring backed her stance, saying any doubts about possible Internet censorship would have to be removed.

The FDP position has been criticized by some in the CDU. Günter Krings, the party’s deputy floor leader accused the justice minister of “going it alone” and called on her to clearly back ACTA. “If a ‘We don’t want ACTA!’ signal comes from Germany, that would be fatal for global copyright protection,” he told the Passauer Neue Presse newspaper.

Another senior CDU figure, Axel Fischer, chairman of the parliamentary committee on the internet and digital society, told the Augsburger Allgemeine newspaper that Leutheusser-Schnarrenberger should take care not to be regarded as a “permanent blocker of important regulations.”

Meanwhile, the opposition parties welcomed the delay in ratification. The Social Democrats deputy floor leader Christine Lambrecht insisted that the fight against piracy could not lead to a reduction in basic rights. Particularly outspoken on the matter is the Pirate Party, a political group that champions digital rights and that is particularly popular among young voters. The party, which recently gained seats in Berlin’s state elections, slammed ACTA in a statement, saying that it transgressed the party’s “understanding of democracy, participation and transparency.”

Martin Schulz, the president of the European Parliament, who is a German Social Democrat, has also criticized ACTA. Speaking to public broadcaster ARD on Monday, he said the balance between copyright protection and individual rights of internet users is “only very inadequately anchored in this agreement.”

ACTA has so far been signed by 22 of the EU’s 27 member states. There were anti-ACTA protests in several other European states over the weekend, including Poland, which is also hesitating to sign up to the deal. Prime Minister Donald Tusk has said that the country would wait for “sufficient consultation” before ratifying.