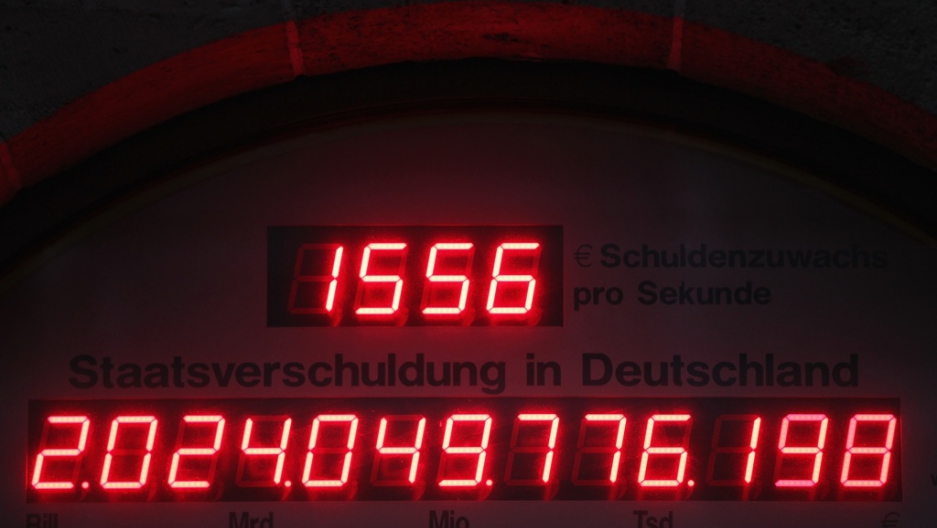 A "debt meter," ostensibly showing the current level of the German national debt, reads over 2 trillion euro on Nov. 21, 2011 in Berlin, Germany. According to the meter, Germany's debt level is rising at a rate of EUR 1,556 per second, but a constitutional amendment aims to reverse the trend.
Credit: Sean Gallup
Share

BERLIN, Germany — In recent months, German Chancellor Angela Merkel has been using the urgency posed by the euro zone’s debt crisis to reshape Europe’s economies, largely to conform with a particular quirk of German economists: disdain for government debt.

For now, Merkel appears to be getting her way. Late last month, 25 of 27 EU states obediently signed up to play by her rules when they agreed to pan-European fiscal union. If the pact is ratified by national governments, the entire EU — apart from the British and the Czechs, who opted out — will have to strive to reduce their deficits to close to zero, or face the consequences.

The plan is as controversial as it is bold. For some countries, meeting the debt goals will be a gargantuan task. And there are fears the austerity drive will choke off any hope of growth in many places. Yet it is the price to pay, it seems, to maintain Germany as Europe’s paymaster, providing the bulk of the funds for the euro zone’s bailout packages.

And at the heart of the German-designed fiscal pact is a concept known as a debt brake. Instead of the 3 percent ratio of deficit to GDP that the Maastricht Treaty rules had laid down, most of Europe has agreed to a structural debt strait-jacket of just 0.5 percent of GDP.

The debt brake is almost an alien concept to a continent known for its lavish public sectors. Even Germany has struggled to abide by the Maastricht limits. But Merkel’s Europe-wide initiative is actually an extension of recent German legislation. In 2009 lawmakers incorporated a debt brake into the German constitution, or Basic Law, and it came into effect in January of last year.

The federal government in Berlin has until 2016 to reach a target of 0.35 percent. And the 16 states, which are financial heavyweights in their own right, have until 2020 to reach a zero limit.

This obsession with fiscal rectitude predates the financial crisis. It has its roots in both the prevalent school of economic thought in Germany as well as the troubling experience of high indebtedness that followed reunification, and that was exacerbated by the dot.com bust at the beginning of the previous decade.

Although Germany has spent when it had to, for example implementing stimulus packages when the financial crisis hit, the dominant economic doctrine has long encouraged getting to grips with the public finances. “Balanced budgets have always played a big role in German thinking,” explained Achim Truger, senior economist with Macroeconomic Policy Institute (IMK), a think tank with ties to Germany’s labor unions.

Both current Finance Minister Wolfgang Schaeuble and his predecessor, Peer Steinbrueck of the Social Democrats, have laid heavy emphasis on cutting down the deficit, which had soared since the 1990s due to the more than 1 trillion euro ($1.3 billion) costs of German reunification.

Now that the debt brake is enshrined in law, those efforts have ramped up considerably. The idea behind the brake is that spending, and some increase in debt, should be allowed during weaker periods, but during an upturn increased earnings are to be used for budget consolidation. “When the economy has normal burdens, there should be no increase in debt, and the debts that are incurred during the bad period can be reduced during the strong period,” Frank Zipfel of Deutsche Bank Research explained.

There are exceptions, for example, for a natural catastrophe or a severe economic crisis. However, any debt incurred must be quickly reduced again. “The decisive new element is that the exceptions are only temporary,” says Thilo Schaefer, economist with the Cologne Institute for Economic Research (IWK). “That means that they have to be reduced within a specific time frame. They only allow for a temporary deviation from the essential rule: no more new debts.”

Schaefer argues that these rules are an important means of ensuring states use money on investment instead of servicing debts. “It’s not that debt itself is fundamentally wrong,” he says. “The problem is when current expenses are financed by debt. That is, of course, not sustainable. A policy of living beyond one’s means in the long term, of always spending more than one takes in, is problematic, because these debts have to be paid back at some time and the interest burden just gets bigger.”

This, in turn, can thwart growth by wasting money on interest payments instead of investing in the economy, he argues. “I don’t see any conflict between austerity and growth. If you don’t save, you don’t have the possibility to take measures that encourage growth.”

This vision of fiscal rectitude is shared by most German economists, who mostly reject Keynesian theory. “International economists have always believed in the possibility of steering the economic cycle,” says Truger of the IMK. “In Germany the mainstream, 90 percent of economists, are terribly critical of this. Since at least the 1980s they have always maintained that it is better to save, even in crises. This is a German particularity, this near obsession with budget consolidation.”

A tough brake, even for Germany

The German picture is complicated by its federal structure. While from the outside it can seem like a prosperous behemoth, there are huge discrepancies not only between East and West, but between regions in the West too. In fact, just four rich states, Bavaria, Baden-Württemberg, Hamburg and Hessen, are transferring funds to the other 12 states to the tune of 7 or 8 billion euro a year under the federal “equalization system.”

And while some of the states are making inroads into slashing their deficits ahead of 2020, there is no agreed joint mechanism. Each state finds its own way. Yet some, such as Saarland, Berlin or North Rhine Westphalia, have such massive debts that the prospect of their meeting the criteria are slim. “It will be hard for them to stick with this debt brake,” Zipfel says.

Yet unlike the EU fiscal pact, there is no real mechanism in Germany for punishing states that don’t meet the target. “It’s not clear what will happen if the states break the rules,” Schaefer admits. “You might be able to bring them before the constitutional court, but it’s not really clear what the consequences might be.”

The federal state may also run into trouble ahead. It is true that the Berlin government is on target to meet the 2016 deadline. The finance ministry predicts the deficit will be around 1 percent in 2012, after reducing it to 1.3 percent in 2011, from 4.3 percent in 2010. Yet a downturn could reverse this trend.

Germany has recently enjoyed growth that is the envy of most of the rest of Europe, with 3.7 percent in 2010 and 3 percent in 2011, on the back of strong exports. But this year looks likely to slow down considerably. December already saw a 4.3 percent slump in German exports, and domestic demand is also slowing.

Ironically, the export of its austerity fixation could end up coming back to haunt Germany. There are already indications that the belt-tightening drive in Greece, Spain and other countries are not working, as they exacerbate the downturn. The latest unemployment figures for Greece, for example, show it reached 20.9 percent in November, and industrial output in December slumped by a staggering 11.3 percent.

With all of Europe pushing down their deficits at the same time, it’s not clear where growth is supposed to come from.

Zipfel, of Deutsche Bank Research, favors policies that consolidate budgets, but sees the risks of the current Europe-wide push. “Some European states have really lived beyond their means. On the other hand, if all these countries consolidate their budgets at the same time and in a very short space of time, then there is no doubt that it will negatively impact on the short-term growth of the economy. Thus we have to reconcile austerity with growth.”

For the IMK’s Truger, it is counter-productive for the richer countries, which enjoy relatively cheap borrowing costs, to be also implementing cuts. “Countries where things are going well like Germany, Austria, Holland, should have the possibility of keeping their deficit at the current level or even raising it, so that the euro zone as a whole has a positive impulse and can grow again.”

Yet a fiscal pact will tie everyone’s hands. “If this agreement is applied so that everyone has to brutally save and imposes tougher and tougher austerity,” Truger argues, “then that would mean that they will have contractually pledged themselves to recession and stagnation and maybe even deflation.”

More from GlobalPost: Greece bailout in limbo, despite advances on austerity