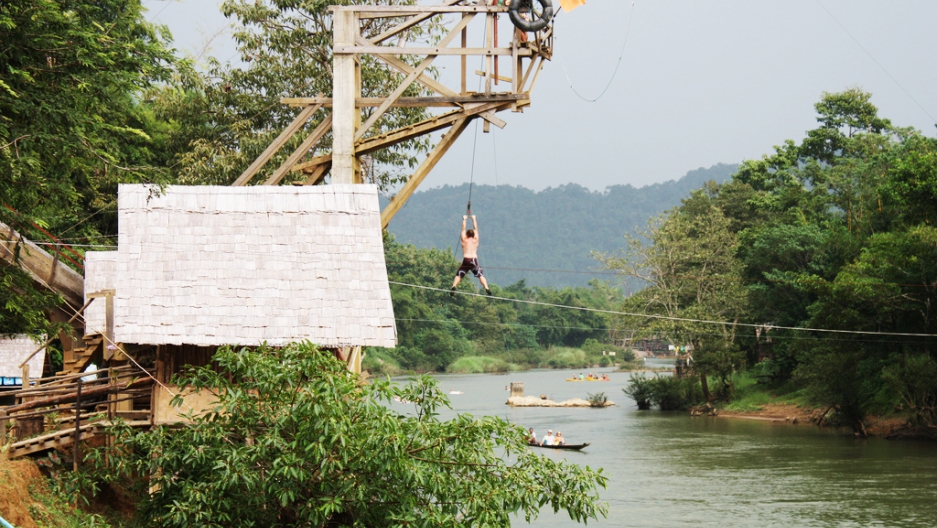 VANG VIENG, Laos — The young man kicks back a free shot of whiskey and begins to make his way up the towering bamboo ladder. He falters on a slippery rung — there’s a breathless moment before he regains his footing and continues up to the platform overlooking the river.

The crowd of backpackers, their half-naked bodies spray-painted neon and smeared with mud, lift up their bucket drinks and cheer him on. It’s 11 a.m.

"Jump, jump, jump," they chant loudly over the pulsating music. "COME ON! You only live once!," his buddy yells.

The young man hesitates, then leaps and lands with a hard splash in the murky waters of the Nam Som river. The crowd whoops and hollers.

Four hours north of Laos' capital city Vientiane, and nestled amid beautiful karst mountains and tranquil countryside, is Vang Vieng, a backpacker mecca of hedonism. Young travellers flock to the town to partake in what is considered a Southeast Asia traveler's rite of passage: tubing.

The idea is captivating. People are driven two miles upriver, then float down the Nam Song on inflated inner tubes, stopping to party hard at bars that line the river route.

But the reality differs.

Two young Australian men are the tubing scene’s first victims of 2012. Lee Hudswell, 26, died on Jan. 10 after jumping from a tower into the river. Daniel Eimutis, 19, was last seen on Jan. 23; his body was found three days later. He is believed to have drowned.

Their tragic deaths have brought attention to a dangerous scene that has risen in popularity over the last decade.

The tales of accidents and close calls are staggering. Backpacker blogs and travel forums recount spills down stairs and off platforms, injuries — ranging from infected cuts to dislocations and broken bones — stories of pulling unconscious people from the river and near drownings.

Luke Heffernan, of Dublin, Ireland, knows he is lucky to be alive. He almost drowned in July 2009, just before his 21st birthday. Heffernan jumped off his inner tube and was swept down by the river’s powerful flow.

Before taking to the river, he admitted to drinking from one of the infamous "bucket drinks," a cocktail of whiskey, soda and M-150 (a Thai energy drink) served in a beach bucket that costs around 30,000 kip ($3.75).

“I obviously didn’t realize how strong the current was and I started to get pulled,” he said in a recent phone interview, recounting the harrowing experience. “Then I got pulled under the water three or four times — and I started to panic.”

He struggled to stay afloat. At one point he tried to swim to a concrete block in the middle of the river but was unsuccessful.

“It was like the end of a movie,” he says of his rescue. “I just got pulled out at the last minute. I had gone under and then a hand came under. It was three, about 12-year-old boys, had come across on a canoe and intercepted me just as I had gone down under the river and pulled me up.”

On shore, Heffernan coughed up water, debris and blood for 15 minutes. Then fellow backpackers carried him across a bridge and a tuk-tuk, or auto-rickshaw, took him to the town hospital. He describes the facilities and care as “absolutely awful” and paid for an emergency flight to Bangkok to get treatment.

Fast, unpredictable water isn’t the only danger with tubing. One foreign guesthouse owner, who has lived in Vang Vieng for eight years, is fed up with the drugs openly for sale and hearing of the deaths of young men. He asked to remain anonymous out of fear of the Tourist Police, which he calls “corrupt” and “powerful.”

“They are working with the people selling [the drugs]. Bars even give you a free joint and two minutes later, the police take you.” Those caught are threatened with jail time and forced to pay a $500 fine that is pocketed by the officers.

Here's video made by another injured tourist, who wants people to enjoy tubing but make sure they know what they're getting into. (Be warned, the video has some graphic images of a head injury around minute 1:30):

Another young Australian man, 22-year-old Alexander Lee, and a Dutch woman named Rianne Brouwer, 18, were reported to have died this month in another part of Laos. They were found dead in a guesthouse in the small riverside town of Nong Khiaw, 10 hours north of Vang Vieng. Its landscape of limestone karst and rivers often draws comparisons to Vang Vieng, and the town is up and coming on the backpacker scene.

The specific cause of Lee and Brouwer's deaths remains unclear, though the couple was reported to be found embracing with drugs nearby.

Officially, in Laos, penalties for drug offenses are severe and include the death penalty.

Whether tubing accidents involve drugs or not, statistics on how many have died or been injured from tubing-related accidents have been difficult to obtain.

One news outlet reported as many as 22 deaths in 2011. Lonely Planet warns at least one person a year loses their life to the river. Last year, the guesthouse owner kept track of every fatality he heard of and says 18 died on the river but thinks there are more, as information is not shared by officials.

“You always hear about someone dying in tubing but not that amount of people like last year. And this year seems to be going the same bad direction. But before that, you always hear two or three people every year ... now, it’s just terrible.”

But tubing has become a financial boon for Vang Vieng and for Laos, a developing country where as much as 73 percent of the population live on less than US$2 a day. Tourism is this developing nation’s third largest industry and it has increased dramatically over the last decade.

According to a statistical report released by the Lao National Tourism Administration, in 2009, there were 2 million tourists and the industry earned $267.7 million in revenue, compared to just 614,278 tourists and $97.3 million in 1999.

Vang Vieng was once a sleepy idyll. Today, the town is in the midst of a building boom, with guesthouses being built by enterprising locals to keep up with demand. The Vang Vieng region had 90 hotels/guesthouses in 2003; in 2009 there were 222. Half the annual profit from tube rentals is distributed to the chiefs of surrounding rural villages.

The region depends on tourist dollars, but at what cost?

The guesthouse owner recalls a sad scene last year, when the family of one British man who died traveled to Vang Vieng in search of answers.

“I had parents to an English boy that died, they came by here and spoke with me ... the mother was crying and I was crying. They tried to get some more information about what happened around his death. I’m not looking forward to the day someone dies, from my guesthouse. And that could be today.”

Everyday the party begins early and ends when tuk-tuk drivers dump intoxicated revelers back in town.

Westerners, hired to be bar promoters in exchange for free food and drink, fuel the party atmosphere and bravado by thrusting free whiskey shots to tower jumpers and every new “tuber” who arrives. Often the whiskey is Lao-Lao, a potent and illegal homemade liquor of dubious quality, ranging from 40-55 percent alcohol.

The Australian Department of Foreign Affairs and Trade has recently updated its travel advice for Laos. Prior to Feb. 8, it recommended "extreme caution" in undertaking river-based sporting activities. Now, it warns that water levels and debris can make "diving or jumping into the river dangerous."

The Nam Song’s water levels are dangerously low in dry season and dangerously high and swift in rainy season. There are no lifejackets. The crowd balloons, dancing on unfenced, makeshift wooden platforms perched meters above the river’s rocky edge. People wear yarn bracelets, a souvenir from each bar visited. Those who stay for days — even weeks — proudly sport bracelets up to their elbows, along with a collection of cuts and bruises.

A menu board for drugs is openly on display. “Special” and “happy” shakes — drinks laced with weed, mushrooms, methamphetamines or opium — start from $5.

Drinking games are rampant. Losers have to take shots; winners get a crate of beer.

To draw a crowd, bars have set up daredevil attractions over the river: roughly constructed zip-lines, Tarzan rope swings, mud pits, jumping towers and an enormous slide, which backpackers have coined the “Slide of Death.”