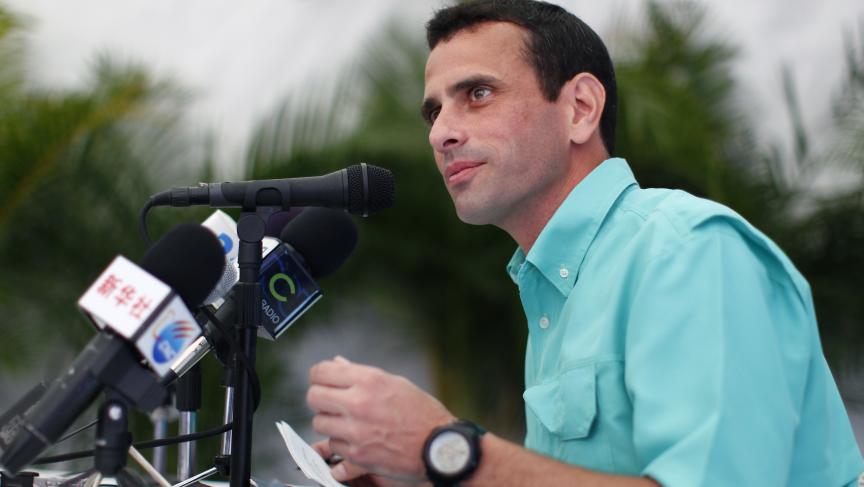 Venezuela is holding presidential elections in October and President Hugo Chavez is looking for a fourth term in office.

In the past, he’s easily defeated the candidates put forth by a divided opposition. This time the opposition is trying a new strategy. It’s holding a primary.

There are a lot of opposition parties in Venezuela, at least a dozen at the national level, from all across the political spectrum. Individually, none of them can hold a candle to the support Chavez and his ruling United Socialist Party have, either in terms of popularity or resources. But united, the opposition might have a chance.

The one-day primary on Feb. 12 will select a single candidate that all parties opposing Chavez say they will support in the general election. The clear frontrunner is Henrique Capriles, the 39-year-old governor of one of Venezuela’s biggest states. On the campaign trail, Capriles talks about tackling inflation and crime, and about getting out the vote.

“No one should fail to vote on Feb. 12,” said Capriles at a recent campaign stop. “It’s going to be an historic day for all Venezuelans.”

This is the first time the various opposition parties in Venezuela agree to hold a unified primary. The nationwide voting is open to all Venezuelans, regardless of party affiliation. Exactly how many show up could give an indication of how strong the anti-Chavez vote may be in October.

The opposition’s Coalition for Democratic Unity is hoping to build on its success two years ago, when it made big gains against Chavez’s party in parliamentary elections.

Still, Chavez remains a formidable opponent. His critics accuse the Chavez administration of derailing former opposition frontrunner Leopoldo Lopez, by charging him with corruption. Lopez was banned from holding public office through at least 2014.

Also, despite problems like high inflation and a soaring crime rate, Chavez’s approval ratings are above 50 percent and trending upward. The president’s ratings may have been boosted by his being back in the public eye, after his long absences last year while receiving cancer treatments in Cuba.

But Leon, who spoke recently at an event organized by the Woodrow Wilson Center’s Latin American Program, said there’s another, more troubling scenario for Chavez. If his illness returns, Leon thinks the 57-year-old incumbent Chavez could have a hard time against a younger, more energetic challenger, like 39-year-old Capriles.

That scenario isn’t rattling Chavez, at least not in public. To prove his fitness, he recently gave a nine hour speech before Congress.

nd he’s been boasting that he’s certain to win re-election in October. But the Venezuelan president also predicts that when he wins, it’s certain that his detractors in Venezuela and in Washington will accuse him of fraud.