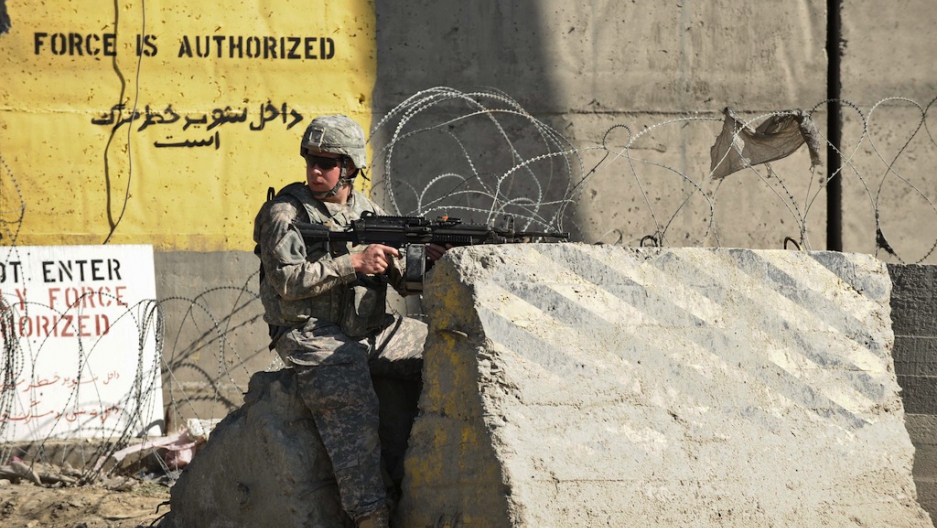 Some soldiers who survived the war have returned to a new, difficult battle at home.
Credit: MASSOUD HOSSAINI
Share

Even as the wars of Iraq and Afghanistan wind down, the US military remains embroiled in what seems to be a losing battle: the fight against the growing number of suicides by active duty troops, and Iraq or Afghanistan veterans.

Statistics on Iraq and Afghanistan veterans, obtained in 2011 through a Freedom of Information Act request by a San Francisco newspaper, found that more than 2,200 soldiers died within two years of leaving the service, and about half had been undergoing treatment for post-traumatic stress or other combat-induced mental disorders at the time.

Senior commanders concede that during some recent years, more American veterans of the Iraq and Afghanistan wars have died of their own hand than through contact with the enemy.

Read more: Should the US retreat from Europe?

In the wake of previous wars, the stigma attached to suicides led the military to downplay the problem, particularly in the ranks of the US Army and Marine Corps, where grueling ground combat often took the heaviest psychological toll.

While the services still struggle to prevent such tragedies, this time, at least, they have taken steps to address the issue. One of the few detailed independent studies of the problem, by the Center for New American Security, a Washington-based think tank, gave the Army credit for designing early warning and intervention programs that may well have prevented an even bigger death toll.

Peter Chiarelli, a four-star general who has seen more than his share of war, ran the Army’s suicide prevention efforts until his retirement last week from the Army’s second-highest post, vice chief of staff. Back in 1972, when Chiarelli was commissioned as a second lieutenant in the US Army, the service was embarking on the long, difficult process of extricating itself both physically and psychologically from the Vietnam War.

Now, forty years later, the army once again is consumed with winding down complex, frustrating deployments — this time in Iraq, which it left last month, and Afghanistan, where it aims to leave by the end of 2014.

The irony was not lost on Chiarelli, who spent his final two years in the service tending to soldiers psychologically scarred by the multiple deployments and harsh realities of the “wars of 9/11,” overseeing the Army’s Suicide Prevention Program, an initiative to identify at-risk soldiers and raise awareness of post-traumatic stress disorder, or PTSD.

I met Chiarelli last year at Washington, DC’s official commemoration of the 10th anniversary of the 9/11 attacks. The general was on a panel about resilience, the theme of the conference. As much as everyone wanted to focus on the towers and the first responders who perished that day a decade ago, Chiarelli’s focus was pitched forward.

"One of the things that's going to test our mettle is going to be our ability to focus on (injuries) after the wars' end,” he said.

Chiarelli led the Army’s 1st Cavalry Division through two bloody deployments in Iraq — losing some 635 troops along the way. The general then devoted his final two years in uniform to eliminating the lingering stigma of war’s psychological toll — PTSD.

But there’s been no dent made in the near-epidemic suicide rates since the wars after 9/11 began.

Statistics for 2011 released last month indicate that the Army and National Guard and Reserves lost 164 active-duty troops to suicide, compared with 159 in 2010 and 162 in 2009, the figures reported. That doesn’t include Navy, Marine Corps and Air Force active-duty suicides — which are reported differently and not easy to intermingle with the Army’s figures.

Veterans groups say that suicides among those who have left the military add up to 200 extra deaths a year, depending on how such tragedies are classified.

For five years, beginning in 2005, a service member died by suicide every 36 hours, according to the report by the Center for New American Security.

The report found that US Army suicides climbed steadily since 2004, and in the Marine Corps, the rate increased from 2006 to 2009, though it dipped slightly in 2010.

And while it said it was “impossible,” given the lack of data, to accurately determine the number of veterans that have killed themselves, the report said that the Department of Veterans Affairs estimated that a veteran dies by suicide every 80 minutes.

The difficulty of accurately tracking and classifying those who take their own lives after leaving the military — let alone tracing the causes back to combat — are legion.

VA figures obtained by an advocacy group for combat soldiers, Veterans for Common Sense, indicate that the incidence of suicide is far more likely among those deployed to a war zone, those identified as afflicted with PTSD, as well as those who divorce while overseas or are abusing drugs or alcohol.

“If there’s anything this experience has taught me, it’s that we simply do not know enough about the human brain to diagnose and treat these symptoms effectively,” Chiarelli told me in September.

“I’m afraid we may have to be satisfied in this war with merely treating symptoms — especially removing any stigma that still exists that prevents someone from seeking treatment. But some of the causes of suicide, even the best neuroscientists in the world will tell you, remain a deep mystery.”